George Washington will be coming to the library soon. I was determined to have refreshments worthy of the honor of this visit, by which I mean: homemade stuff. A month before, I made a list of goodies  I've baked over the years and which I know are good (at least, to my mind). I thought if I baked one thing on every day off, I'd be in a good place. Well.

It often happens, doesn't it, that something gets in the way of plans. What I'm saying is that I have made only four things. He's coming in a week and a half. I've gotta get hopping.
Posted by Lisa at 8:31 PM 5 comments:

From Brother Cadfael, as I love re-reading those medieval mysteries:

"Never go looking for disaster. Expect the best, and walk so discreetly as to invite it, and then leave all to God."*

-  Ellis Peters, The Virgin in the Ice

I removed a painting of a Christmas tree from it's spot in the hallway and got distracted from replacing it. Later, while trying to have a quiet dinner there was a strange noise to be heard - the orphan had her eye on the small picture hook in the wall; she was jumping up and trying to get it. I saw her jump halfway up the wall! But that wasn't high enough and so she gave up.

Needless to say, I hung up another picture. It's never dull around here. 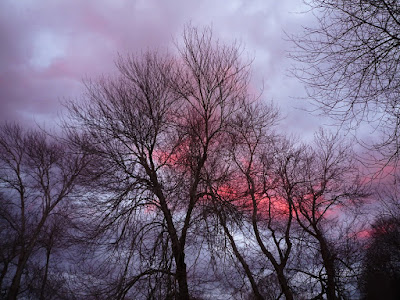 some pretty pink before sunset
Posted by Lisa at 10:32 PM 6 comments:

Cyndi came by and we exchanged birthday and Christmas presents, because we just haven't been able to until now. And one thing she gave me was a little outdoor statue of a tuxedo kitty. 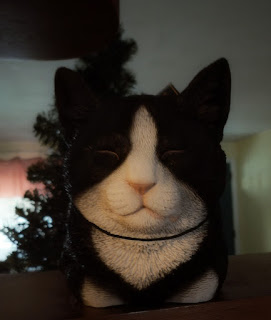 Reminds me of someone. We'll either put it on the back step, or near the kitchen garden, where he used to hang out.
Posted by Lisa at 10:10 PM 5 comments:

I spent an hour and a half this morning listening to the Festival of Nine Lessons and Carols from the BBC's website; it was the last day to do so, in fact I had until 11:30 and while I was tempted to just forget about it this year - since I had worked on Christmas Eve and then kept putting it off until time ran out - but no, I do not regret spending that amount of time just being quiet and listening to the service. It means I had less time to do other things, but - Jesus said Mary chose the better part and I think I did this morning, too.

a little extra work at dinner

I came home to leftovers of not-a-lot-of chicken, some veg and mashed potatoes. Naturally, I thought of shepherd's pie, so I heated up a roux with three tablespoons of oil and a quarter cup of flour, added two cups of chicken stock, marjoram and salt. I then had to mash the cold potatoes with some cream and egg. Some parmesan sprinkled on top and a bit of leftover cheddar and I was very pleased with myself as I put it in the oven at six thirty.

When I realized I wouldn't be eating it till at least ten after seven, I had to content myself with a bowl of broccoli soup and a few cookies. (yes, we are still eating those!) And when I did have supper, it was very nice to have a hot and thoughtful meal. It hadn't seemed like enough until I put it all together - way more than the sum of its parts. 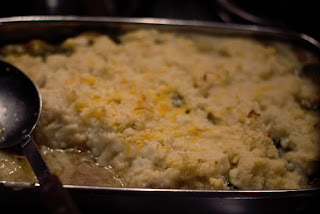 When I was a child the weatherman would speak of a January thaw, which meant, of course, temperatures above freezing, in the forties and maybe fifties. You rarely hear them use the word anymore; we have had some very cold days this winter, but then it goes back up to the forties. 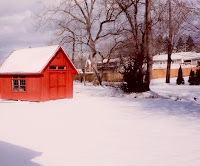 We had some lovely snow Saturday night. And that's how it's supposed to be in January where I live: snow often, and temps in the thirties, or colder. I prefer it to be the way it should be, but I have to say that last Sunday, the 12th, was well into the sixties, and absolutely dreamy. If only Easter could be so nice!
Posted by Lisa at 9:18 PM 5 comments:

My beloved multi-colored Garnet Hill wool scarf has a hole. It's crocheted with fine yarn and for a month I've been putting off trying to repair it. 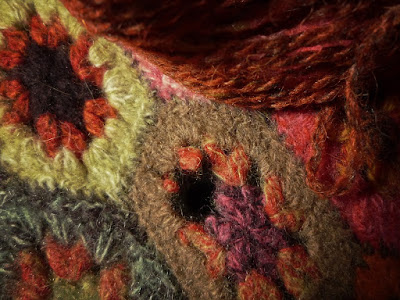 What was holding me back was the thought of trying to crochet it back together with a very small metal hook - I'm not a great crocheter. But after looking at it, an embroidery needle will do the trick and that doesn't scare me at all. And it just so happens that I've got yarn in a very close color!
Posted by Lisa at 10:22 PM 5 comments:

Today was dark and cloudy one minute, sun shining the next, and very windy. Just now I noticed it's snowing - I didn't think it was supposed to.

The sky is low, the clouds are mean,
A travelling flake of snow
Across a barn or through a rut
Debates if it will go.

A narrow wind complains all day
How some one treated him;
Nature, like us, is sometimes caught
Without her diadem.

"The future of mankind, for the socialist, is simple: pull down the existing order, and allow the future to emerge. But it will not emerge, as we know. These philosophies of the 'new world' are lies and delusions, products of a sentimentality which has veiled the facts of human nature.

We can do nothing unless we first amend ourselves." (emphasis mine)

-  Roger Scruton   May he rest in peace. 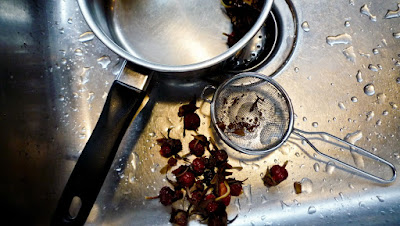 The rosehips I picked in the fall - I finally used them: I made a decoction and used it instead of hot water with my Constant Comment tea.
Posted by Lisa at 8:02 PM 3 comments:

Orphan Annie was spayed on Monday, and now we are supposed to try and keep her from overdoing it. No stairs. Okay, we've got the basement door closed for the next ten days. But she's jumping on tables and chairs before we even know she's going to. My brother put up plywood "ramps" near two living room chairs. Does she use them? Well, she did the first day. And she walks *down* them. She jumps up on the chairs, though.  At least she sleeps a lot. 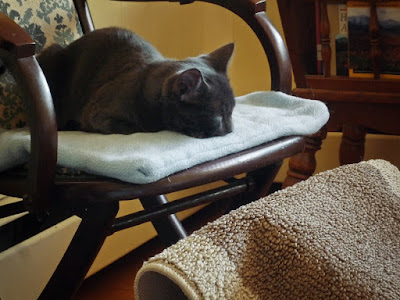 You see that thing in front of the chair is a ramp, with a throw rug over it. To make it more appealing, presumably.

The cats are being limited to the kitchen and living room mostly, and I've been sleeping on the couch to keep an eye on them. I keep the little Christmas tree in the kitchen plugged in for some light, and I've got the nativity for company with a fake pillar candle near it. It's enough to see them by, and makes for a very pleasant atmosphere. I also took yesterday off from work, but any ideas I had of hovering in order to prevent undue activity on her part were just foolish dreams. She is going to do what she wants, and be on to the next thing before I know what she's up to.

"A rich man is not one who has much,
but one who gives much.
For what he gives away remains his forever."

from "Theology of Home: Finding the Eternal in the Everyday" by Carrie Gress, Noelle Mering and Megan Schreiber
Posted by Lisa at 1:50 PM 1 comment:

To us a Child of Hope is born,
To us a Son is given,
Him shall the tribes of earth obey,
Him all the hosts of heaven.

His power increasing still shall spread,
His reign no end shall know:
Justice shall guard his throne above,
And peace abound below. 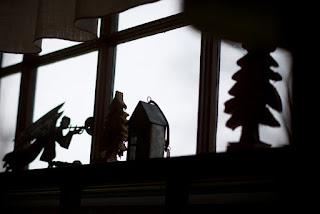 It's Epiphany; I got out the Three Kings. It was simple enough to swap them out for the shepherds in the living room, but the kings with the little nativity won't fit on that small shelf in the kitchen. I decided to arrange them right in the window.

The Holy Family and one of the kings: 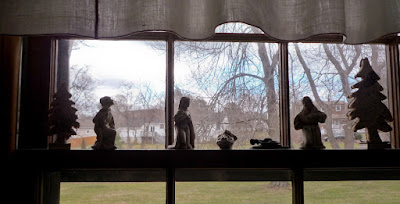 with the other two on a shelf to the left:

I think it's a good arrangement.

"Born a babe on Bethlehem's plain
Gold we bring to crown him again
King forever, ceasing never
Over us all to reign."
Posted by Lisa at 6:00 PM 2 comments:

I brought home a Christmas-themed cookbook from the library - several of the recipes were appealing. I started out with some cinnamon cookies which contained chocolate pieces, dried cranberries and roasted hazelnuts. I had all the ingredients in the house!

They are quite simple: You melt the butter and stir in everything else. Except that they're chock full of these bits, and the dough didn't seem enough to hold it all together. So, as I was trying to push the fruit, nuts and chocolate into the dough, it kept falling out and I ended up just snacking on it all, sort of an impromptu trail mix. But I liked them well enough to try and figure out another plan. 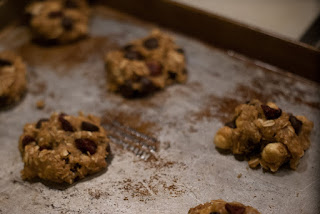 I thought if I doubled the dough part of the recipe, then added the pieces till they were fully mixed in, I could maybe add more and figure out the right balance.

Well. After they baked, they didn't seem as nice as before; they had less stuff in them and the cookie part wasn't anything fabulous on its own. What to do? I wasn't able to fit anymore pieces in!  I ended up molding them and then sticking more chocolate and fruit wherever I could squeeze it in. That was the last batch, what you see above. So, I guess I did figure out a way to do it. 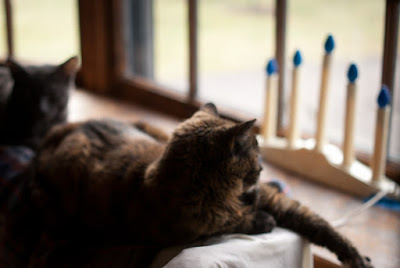 Striving for a little post-holiday relaxation time.
Posted by Lisa at 12:19 PM 3 comments: