let all creation bless the Lord

All living things upon the earth,
green fertile hills and mountains,
sing to the God who gave you birth;
be joyful, springs and fountains. 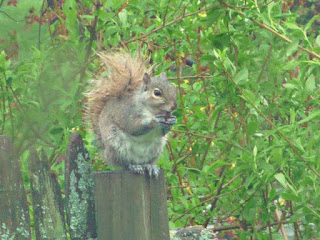 -  from  Let All Creation Bless the Lord,
by William Bradley Roberts
Posted by Lisa at 11:13 AM 3 comments:

I'm not hooked up to Pinterest - I use Clipterest!  Never heard of it, I'll bet. 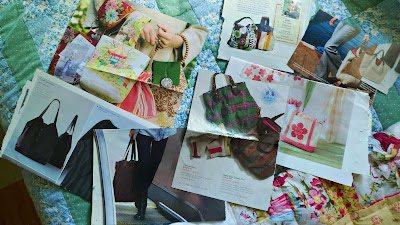 I don't deny the existence of inspiration which can be found on the internet. But I really. don't. want. to be spending. more. time. in front of this screen. And I don't need to, anyway! 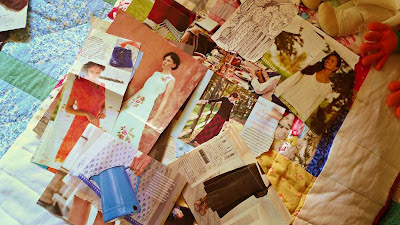 At the library, we have a basket on the floor going into the reading room - where the magazines and newspapers are - and if you have a magazine you are finished with, you can leave it there for another to take. I've taken many of these. And I tear out pages which appeal to me. No, I don't clip them out; that isn't where the name comes from. 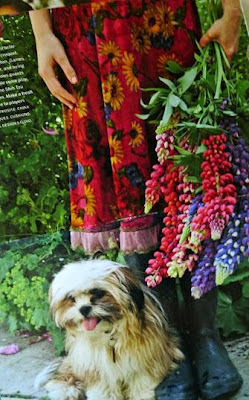 is this a dress or a skirt? I love it!

I clip the pictures together with a clothespin! I have two clips: one for bags, clothing, and personal type things. The other for home decor items.  (More on those later.)

I even save photos of food on occasion, without the recipe - the picture is often enough to go on: 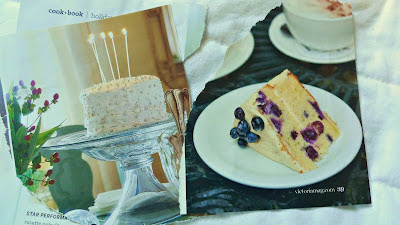 the cake on the left looks like an Alicia Paulson creation. She may have seen this picture, or they may have seen her blog - who knows?  It's charming! On the right, all I need to remember is that I can throw blueberries into a dense vanilla cake, and toss some onto the icing - hopefully it would look as wonderful as that does!  One doesn't always think of these things without being reminded.

Dolly on the new quilt 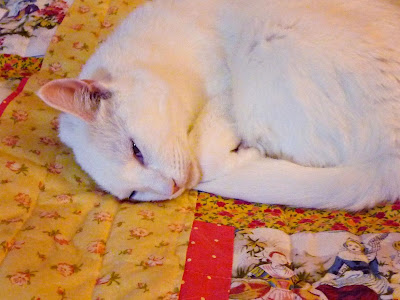 there was a wedding 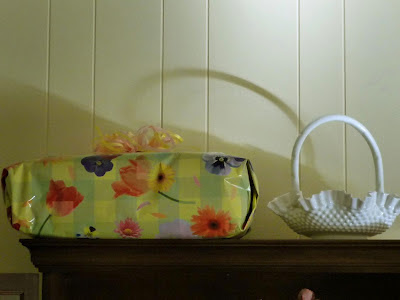 (up high away from the cats)


and we took our presents and went.

To a beautiful ceremony and many happy people. 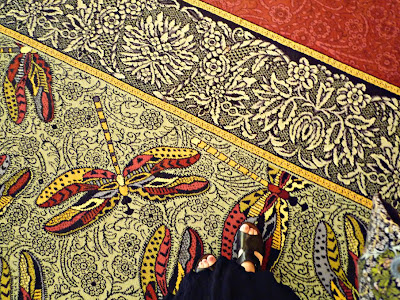 (painted my toenails for the occasion)

A hotel with dragonflies on the carpet, and a three-storied escalator. 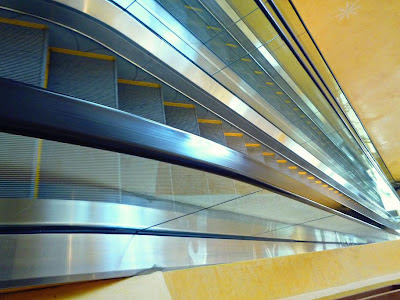 Much joy and enjoyment. 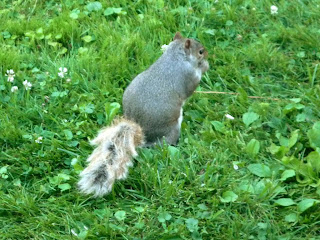 a fish dinner and a new dress (almost)

I've been slowly working my way through a dress, and it's nearly finished. Hopefully I won't mess up the placket - not sure I've ever done one. 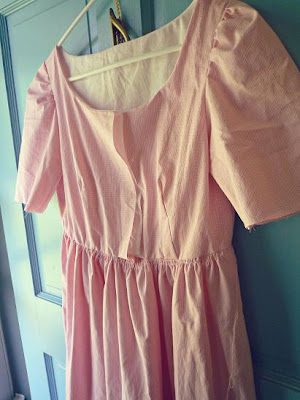 It's a tiny pink and white check I got a great deal on. And {pretty}.

Sunday, I made a fish dinner which was super fast and easy. It's from Nigella Express, which I've owned for a while but haven't used much yet.

You put 12 oz. of smoked cod* in a skillet along with a stalk of celery, sprig of parsley, some peppercorns, two bay leaves, a third cup of white wine and a cup and a third of water. Poach the fish in this liquid till done - and it doesn't take long; three to five minutes.

Remove the fish and keep warm somewhere, pouring out some of the liquid and getting rid of the "pieces". Into the pan, put two cans of cannellini beans which have been rinsed and drained and warm them in the liquid. When they're warmed up sufficiently, re-add the fish, breaking it up and mixing it all  together. Add 2 T. olive oil to it and some more parsley. Also chives, if you wish.

*I didn't have smoked cod, so I just used regular - I'm not keen on smoked things, anyway.  This recipe was filling when served with a couple of vegetables, and tasty. It didn't heat up the house during the oppressive temps we were having. This is a keeper!!  {real}ly good.
(and I almost forgot to say that it's even better cold, when left over.)

In the middle of sewing a dress for myself, and decided the bodice needed a lining. The neckline isn't so curved that I would have had trouble understitching it on the machine, but that's one thing I enjoy doing by hand - I can better feel that everything's smoothed out properly. 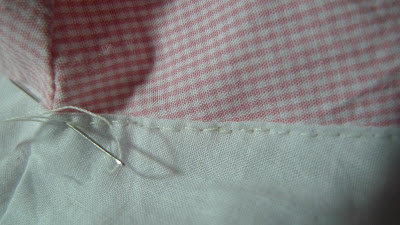 (Of course, if I'd been as fussy about proper lighting, my stitches wouldn't be so uneven!)
Posted by Lisa at 8:29 PM 2 comments: 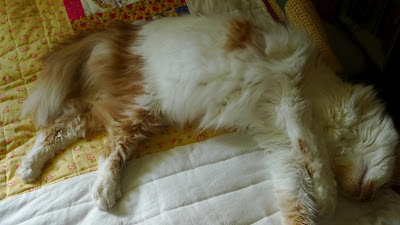 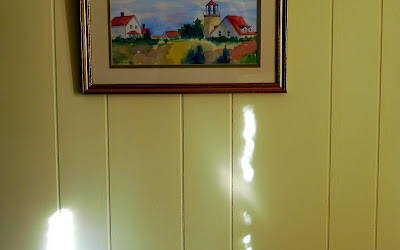 on an afternoon wall. So hard to capture.

Email ThisBlogThis!Share to TwitterShare to FacebookShare to Pinterest
Labels: form

Dolly and I watch Downton Abbey 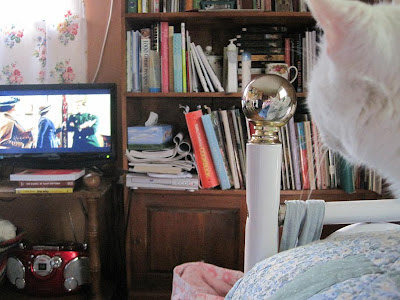 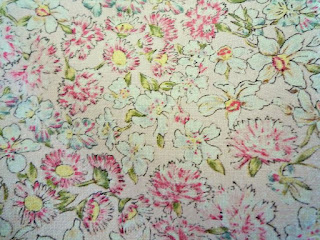 using some much-loved fabric which was a jumper in a previous life, a length of eyelet trim waiting many years to be used, and matching checks. 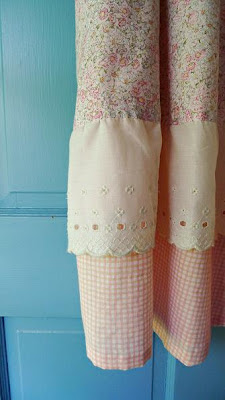 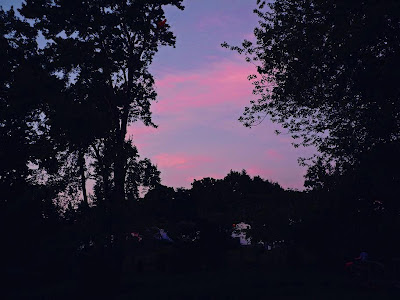 just a little bit like Maxfield Parrish.
Posted by Lisa at 9:09 PM No comments:

My quilt is done. 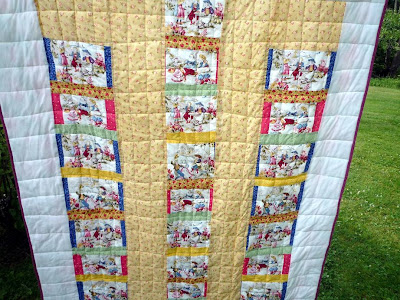 The machine stitching lines are not as parallel as I'd hoped but it's good-sized, it's colorful, it will be warm.

My first object in making this was to use up large amounts of fabric, of which I had too much. I grabbed a colored toile. It had three scenes in it and I cut them out, not very precisely, which gave me 23 little "pictures".  I'd just been looking at Jane Brocket's quilt book - The Gentle Art of Quiltmaking - and was really liking the ones made simply with wide strips. So, I got the idea to make three rows with these vignettes, alternating them with strips of (somewhat) coordinating fabric. I had a large piece of a yellow with pink rosebuds which looked well with the toile.

The next thing I needed to do was try and get these little pictures into a uniform size; I had just quickly cut them. I thought I should "frame" them, and for that I found a deep blue batik; when that ran out I used a deep pink with small yellow dots.I sewed some to the sides of each "picture. Then, I needed to make my columns with matching fabric in between, and I found three fabrics which matched well - a green with machine embroidery, a golden yellow with white dots and a yellow with flowers. I made my three rows.

The white I used for a sashing made the whole thing too big for the backing I'd chosen, so I pieced it with something else - both with roses. I made the binding from a deep berry color. 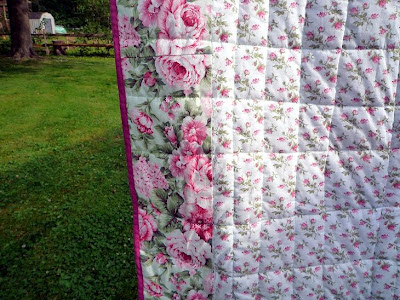 My machine stitching went a bit off course at times - I need to improve on that. Overall, I'm very happy with it anyway - I made a quilt!
Posted by Lisa at 10:16 PM 6 comments: 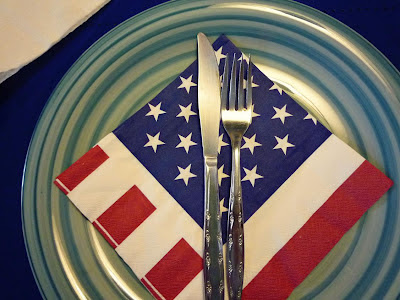 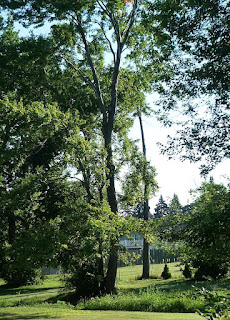 Tall stands the tree beside the stream,
where living waters flow;
Wide flung the branches, cool the shade,
where all the weary go.


Fresh green the leaves for healing giv'n,
bright gold the new-pressed oil
that runs as balm upon the banks
toward which the weary toil.


Deep-scarred the bark, but sweet the wine
that pours down, last and best.
And rich the table spread below,
where all the weary rest.


Sing praise to God, the gardener,
Whose labors never cease
to make beneath the Tree of Life
for all the weary, peace.


-hymn in the July Magnificat
Posted by Lisa at 8:32 PM No comments: