Well, we had a record one hundred and eighty four kids come for candy tonight. But we still bought way too much candy, so the leftovers are going to the local soup kitchen. Dolly was more interested in the jazz cd I was playing, but Annie was very excited about all the activity. We had princesses, two fisherman with poles and a "fish" hanging at the end, ghouls galore and one Grim Reaper, a parachuter, a bottle of ketchup and a girl who was carrying a rabbit! It was real, I petted it! There was a large, inflated dinosaur who had a hard time coming up the steps; as she went down I heard her advise the others to never buy an inflatable costume.

A lot of dads brought their children, and four of them were glad to take a chocolate bar for themselves when asked.

But the piece de resistance was a young man dressed like the fellows who guard the Queen's palace - you know, the red uniform with a tall, black fuzzy hat. I got excited and asked if he'd met the Queen, but he said no. I told him he should say yes. He was a Scots Guard, I think, as there was no colored feather on his head gear. The day was dreamy, and the evening was lovely.

My brother came in the other day to say he'd seen a garden snake laying in a sunny patch of dirt, put down after the fellow finally came to remove the ground-up wood chips. I have never seen a snake on our property, but of course they are there, so I said let's go back out - I want to see it. We went right out again - but he was gone.

Meanwhile, there we were, across the brook where I'd been examining the leaves of the trees out there, because I haven't paid attention and don't even know what they are. I know the tall swamp maple, because it's the brilliant one every October. And I did know the sassafras, with three different types of leaves on one tree - 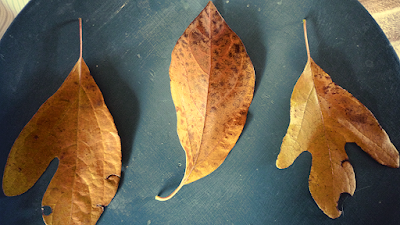 one, a sort of mitten shape, one, with three lobes (is that the right word?) and another just oval-ish. I'd also noticed a maple with very large leaves, and this tree is still green! I guess it does this (or rather, doesn't do it) every fall, but as I said, I never noticed. So I picked a leaf and looked in my guide. It's most probably a Norway maple. Seems to be considered a pest by many, and it doesn't get pretty in the fall. 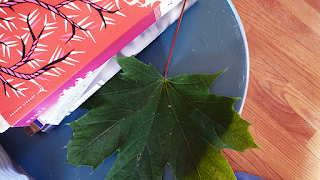 This leaf is about nine inches across. And I also saw another shaped leaf, but I had to take one from the ground, since the branches are too high up. It's an elm! I think, a slippery elm, which is nice to have around; I used to love those slippery elm lozenges by Thayer. They don't make them anymore. 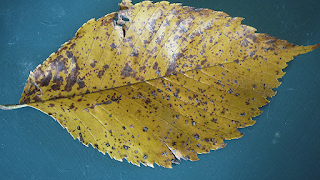 However, I'm glad to know what an elm leaf looks like. Meanwhile, my brother saw a snake again today, but I wasn't there, again. I'm sure I'd be startled to see a long snake in the grass, but I'm not afraid of them.

I'm still reading the book about domesticating foxes - I'd put it aside for a while in order to concentrate on the Coleridge book. So I've started the Anthony Esolen Inferno translation and it's good! Easy to read, but I'm sure I should have read it soon after the last version, in order to be able to compare them; as it is, I can't remember what the other one was like, and have no idea which is really better. Still, it's a good thing to be challenged in one's reading habits and I'm liking it. 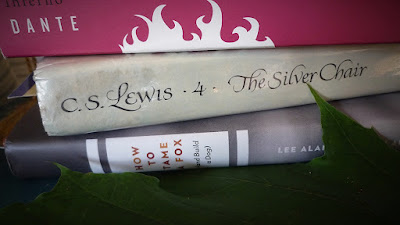 I also have The Silver Chair. I've been slowly progressing through Narnia, since around the beginnings of COVID. 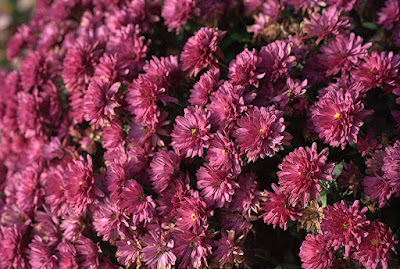 It took so long for the pot of mums near the shed to fully bloom. But, so pretty now.

I lift my eyes to you, O Lord,
Until you speak your promised word;
Mine like the eyes of maids who stand
Until the mistress waves her hand.

So shall I wait upon your will,
Commands that seem of good or ill.
For even harshest words from you
Shall still prove holy, good and true.

So Jesus listened and obeyed
When in his human will afraid.
Despised, rejected, sought and killed -
He yet attended to your will.

So may this Church which you have wrought,
And with your own blood dearly bought,
Delight to ponder and obey
The hard or gentle words you say.

Have mercy, Lord, have mercy long,
Our very weakness render strong,
Until the earth, like heav'n is filled
With sweet concordance to your will.

so long to Thrush Green and Coleridge

I finally finished reading Malcolm Guite's Mariner, about Samuel Taylor Coleridge's Rime of the Ancient Mariner. If textbooks were written like this, everyone would love school and learn better. And apparently it was STC's birthday the other day; a difficult life, but he held on to God throughout. And so I have only two things left on my reading challenge, and one is a 14th, 15th or 16th century book, or something about those eras. I'm going with Anthony Esolen's Inferno translation. I read the whole thing several years ago, and then wanted to try another translation, so I bought this and it's been on my shelf ever since. Meanwhile, so much time has gone by, and since I didn't keep the first one I can't compare them. I do like this so far, though. I also finished all the Thrush Green books from the library. It took me a long time, but they were very pleasant. And the last one, A Year at Thrush Green, or something like that, was especially nice for some reason. I was wondering if it might have been the last of the series because it seemed to make everything feel settled in a way.

I am still getting used to Windows 10 and my laptop, while also trying to re-organize the pantry and wash windows. The computer is not at the top of the priority list.

I have a little long and narrow pillow from the thrift store which I've meaning to hopefully cover in a nice way - it's got a thin layer of something over it which holds it together; but a small person somehow ripped this thin layer and now I have to remake that cover, too. It wasn't Dolly. (not that you thought it was)

wanting it both ways 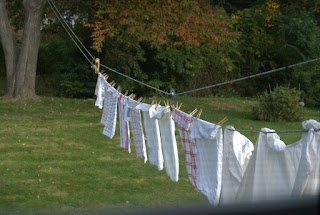 The weather today turned a corner. They said it wouldn't reach sixty, and I dug out some fall-type clothes; I was waiting to feel like it was time. So I dressed for the weather and was comfortable on an otherwise beautiful day, and I had to ask myself why it is that I still love summer best, when I am unable to function in humidity? I know why: It's the long days, the fireflies, the possibility of outdoor living, the bare feet, the open windows all day. But it's also the air conditioning, (or) the sweating, the limited menu because you don't want to heat the house by too much cooking, the lack of energy, seeing the cats lay around like 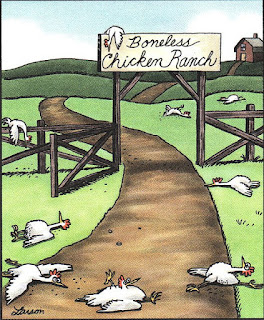 all credit to Gary Larson! :D
Today, even though cool, I washed a window! I was comfortable! But it was dark at six thirty. And it's been forty five degrees at night.

Email ThisBlogThis!Share to TwitterShare to FacebookShare to Pinterest
Labels: fall

Well, I don't think I ever stayed away from blogging this long. My laptop finally stopped recognizing the wifi, so I had to buy a new one, which I'm sorting out. And even though I have a tablet, trying to type (sometimes) long posts would have been troublesome, so I just didn't bother.

I had the week off, too, and did many things but couldn't share. It's looking like fall here, and has felt it sometimes but I think it's also warmer than normal - lots of temps in the seventies. But the trees are turning and this afternoon I picked a few little aster and goldenrod blossoms, along with some from the lovely hanging plant, and placed them carefully in some book pages to dry. I've never done this, but I have a project in mind, so we'll see how they come out.