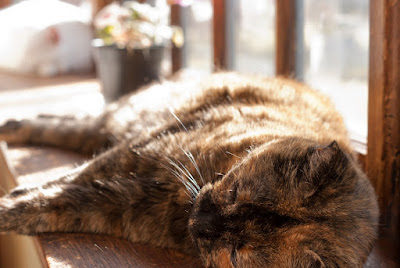 with the two females on the windowsill, and nobody bothering anybody (i.e., Sweetie not bothering Dolly).  Ahh, peace.
Posted by Lisa at 7:23 PM 6 comments:

At the library, our lounge has a window, but the little kitchen adjoining the lounge has a wall of windows, and on the other side of the kitchen is a meeting room, with more windows - and when it's cold out, a most inviting place to sit and have lunch if nobody's having a meeting there. 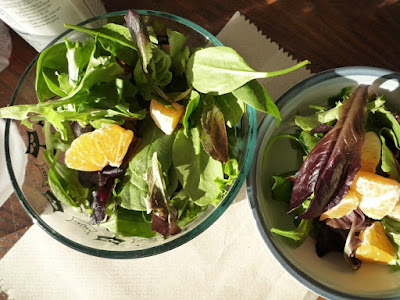 Glory to you, who safe have kept
and have refreshed me while I slept:
Grant, Lord, when I from death shall wake,
I may of endless light partake.

Lord, I renew my vows to you;
scatter my foes as morning dew;
guard my first springs of thought and will,
and with yourself my spirit fill. 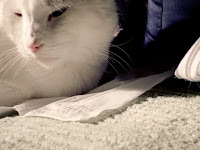 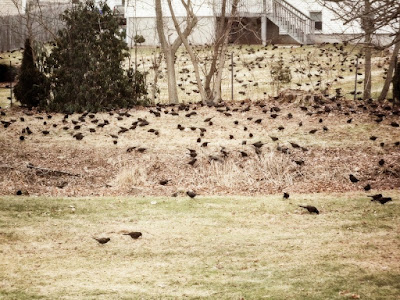 The blackbirds came by yesterday just like they do in spring and fall. But it isn't. I guess I'll have to call the Audubon Society.
Posted by Lisa at 10:30 PM 3 comments:

Email ThisBlogThis!Share to TwitterShare to FacebookShare to Pinterest
Labels: feathers

bakin' in the oven 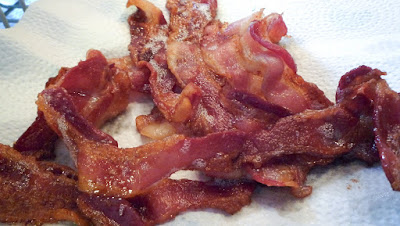 I had to cook some bacon but didn't look forward to the hovering over it. So I looked up how to do it in the oven.

Foil-covered pan, cold oven, then turn it up to 375, twenty five or thirty minutes if you want it crunchy. A very easy cleanup, and I can use this method when I won't be needing the bacon fat, which tends to last me a while. So much better.
Posted by Lisa at 8:11 PM 4 comments:

My brother was in New York City over part of the weekend, so he met up with our cousins who live there. I was informed that he'd be bringing home a blanket that Yoko had made for me. I know she likes crocheting, but that was just a guess - I was told nothing else. 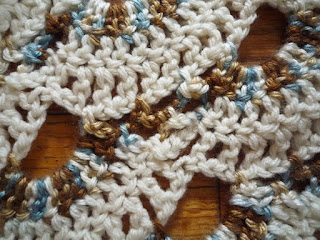 It's crochet, all right. All cream, with blue and bronzy-brown. 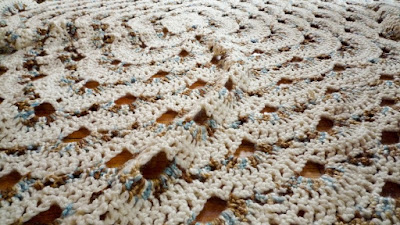 Are you beginning to see how fabulous it is? 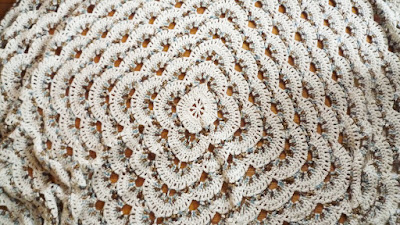 This is a treasure - heirloom quality.

I can crochet, but I could not do anything like this.  I'm flabbergasted.

I've got it over the chair in the hallway. Away from cats and claws.
Posted by Lisa at 8:33 PM 9 comments:

"One of the most important words in the Gospel of John is menein (to remain, or to stay, or to abide). Phrases containing this word sound like a refrain throughout the fourth Gospel: Remain in my love; Remain in me as I remain in my Father; If you abide in my Word, you are truly my disciples; Whoever does not remain in me is thrown away like a branch and withers. What is being signaled here is something fundamental to the Christian faith, namely, that Jesus is infinitely more than a teacher whose instruction we follow or a moral hero whose example we imitate; rather, he is a field of force, a power, in which we are immersed. Saint Paul indicates the same truth when he speaks, over and again, if being in Christ."

It seems to take me so long to read anything of Gladys Taber's; the books consist of a great many short sections on a number of things, each one separate and most of them worth pondering for a while - you can't just plow ahead like with most books.

"...better to live one day at a time. This is a hard task, often, for we tend to keep going to the past and trying to live it over again or looking ahead and uselessly trying to forecast tomorrow and next week and next year. But somebody has said all the time we really have is the NOW."

-  from Stillmeadow Daybook
Posted by Lisa at 8:53 PM 4 comments:

The other day when it snowed, we got ten or eleven inches. That is nothing unusual for this part of the world, but the cold we've had here since a little after Christmas has been quite unusual, and the wind at times!

"Now great winds roar down the canyons of the sky. Branches crash, brooks race, snow scuds along greystone walls. ...despite the scientists I find nobody knows whence it comes or whither it goes. The dark of north woods is in it, the white breath of polar ice - how it blows away the settled feelings of snug hearth and flickering candlelight!" 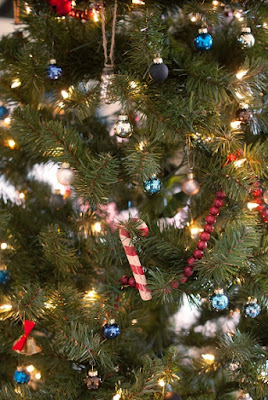 And this morning, the coldest of them all, arriving at church to find the heat wasn't on! Not working!  I was dressed warmly with down coat, tall boots and warm gloves which stayed on my hands as much as possible during Mass, but I had to sit in our warm sunny living room a long time afterward to get warmed up. I read a lot of this and that, under a blanket.

Which brings me to another story from Gladys:

"This weekend Connie came home and on Sunday morning went to church with me. In the middle of the sermon, a terrible crash sounded, a crackling, bashing sound... The minister was talking about Paul, and he only paused a minute and went on about Paul and the shipwreck. Paul said the ship would not be wrecked, in Acts something or other. I admired Paul's courage. Another crack came.
Then the sweet-faced organist stepped over and murmured something to the minister and moved to the back of the church. It turned out the organ pipes had sort of blown up as it was a very cold day. It sometimes happens, announced the minister."

I thank God for the people who make down coats, cashmere gloves, wool sweaters and 180s (ear protectors).

through all the darkness

"God our Father, you sent your son into the world as a beacon toward which we travel in faith, trusting that by his light we will find our way through all darkness into the glory of your everlasting love. Guide us on our road and bring us safely to our rest, through Christ our Lord. Amen." 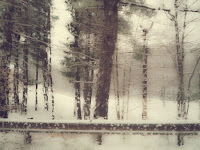 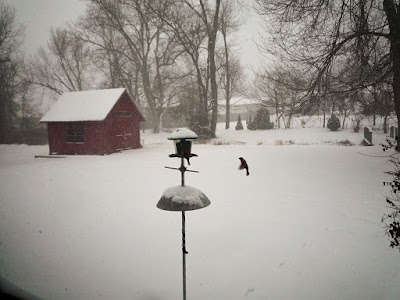 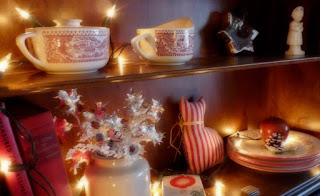 "It's a comforting thought that beautiful moments never die. One can collect them, store them away, and they are always at hand to bring forth again and appreciate. There are many of them, and all one needs is an awareness to have them."

from darkness to radiance

Loving Father, darkness is for ever changed because of the Birth of the Light: Jesus Christ your Son. Take all the darkness of our lives and replace it with the radiance of our newborn Savior. Through Christ our Lord. Amen. 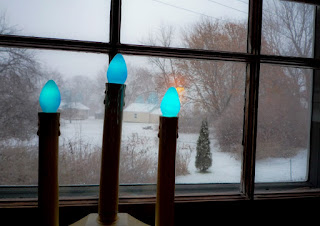