a white-flowered hanging plant, for a change

My co-worker told me there was a terrific plant nursery about a mile from my house - I had no idea the place was there. 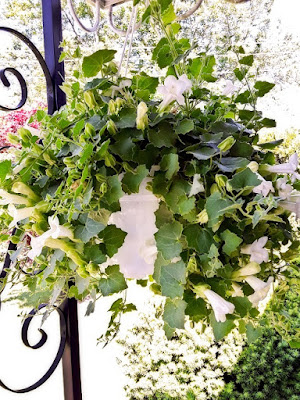 I wanted a really nice hanging plant for the front. This is what I bought, after looking at them all.

I forget what she said it is, but the leaves are velvety, almost like marsh mallow, the white flowers trumpet-like. It's kind of viney - it looks beautiful!
Posted by Lisa at 8:28 PM 4 comments: 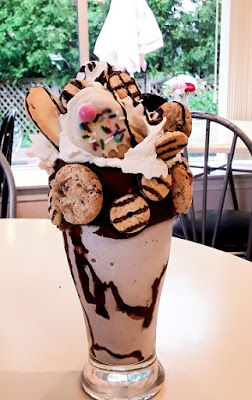 Email ThisBlogThis!Share to TwitterShare to FacebookShare to Pinterest
Labels: frivolity

This day the Lord has made his own,
Who broke from his confining grave.
His living presence fills the world
That by his Cross he came to save. 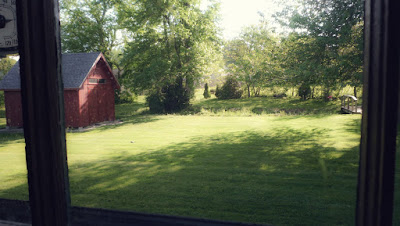 the path of God

I finally got over to Diane's last Monday to see Mr. Kibble. We were petting him, Diane was kissing him, and he was cool with it all, the dear fellow! She said he'd had a growth on his lip which got  taken care of, and then he had a scratch under his eye. She had some ointment for it. She told me he seemed content to stay indoors, only going to the door to look out.

Yesterday evening I had Dolly on a leash outside and Diane called to me. She had some sorry news - Friday night she realized that Mr. K. has gone blind. We knew that his immune system isn't good - you can always hear his breathing at a distance, and it never gets better. Also, the periodic growths: last summer a couple of times he showed up with little things growing out of his forehead, which would get bigger and then disappear, I suppose getting knocked off when he groomed himself. He's older, his teeth aren't good and he has been on his own too long. But the poor little guy, to get this now, when he's finally in a place he can call home! We feel so badly about it. 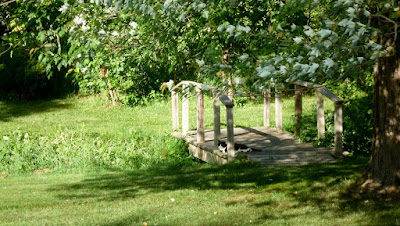 Please remember him in your prayers.
Posted by Lisa at 8:29 PM 8 comments:

May, where are you? 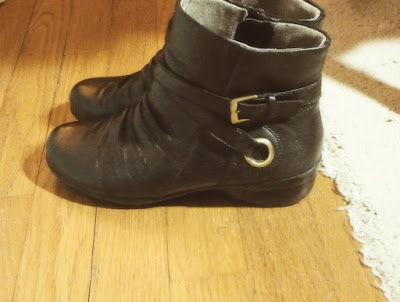 I had polished these shoes last week, or maybe before that. They were nice and shiny and I put them away. Because it's May, after all, and who's going to wear black leather booties in spring?

Well, nobody, unless it's fifty degrees, or maybe even in the forties. And it was on Sunday, and I needed those shoes again. The weather man said it should be around seventy - it has been twenty degrees cooler than it's supposed to be. We are hoping today was the last of it; it's going up tomorrow, and at least till Sunday.
Posted by Lisa at 9:20 PM 6 comments:

"The only end of writing is to enable the readers better to enjoy life, or better to endure it."

-  Edith Schaeffer, What is a Family? 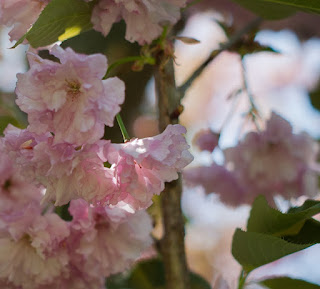 Orioles come every summer, and I consider myself lucky to catch a quick glimpse of one whizzing by or high over head, but it's been several years since I've seen one, and I don't know their call to at least know they're around. But on Wednesday my co-worker said she'd had an oriole at her feeder, eating the black sunflower seeds -  that was unusual! So she put half an orange in the suet feeder for them because they really like sweet things.

Well - the next day while making my bed I looked over to my neighbor's apple tree, and there was an oriole, happily jumping from branch to branch, picking at the apple blossoms! He was there quite a while. I called Betty immediately. She emailed me later to say that right after my call she had seven of them in her tree! She got a photo of two, and sent it along. This is exciting; maybe it's a good year for them. (But I wonder if my neighbor's tree will still produce apples, hmmm.) 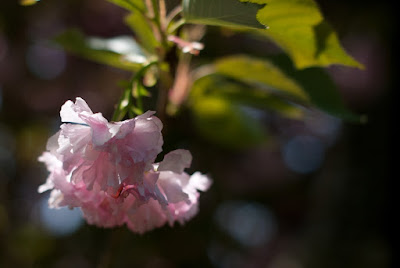 The cherry tree has been blooming for a week, through the mostly rainy and gloomy days and now the winds are blowing off the petals. The display was as beautiful as ever, but the tree itself now has a fungus growing up it. I suppose this happens on weak specimens and can't help but wonder if this will do it in. 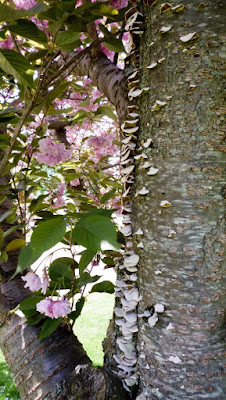 I couldn't get a good picture of it, but the trunk below this part looks bad: a thick section of outer bark is coming away from the inner part - I could just pull it off easily, by the look of it. But it still wants to bloom. 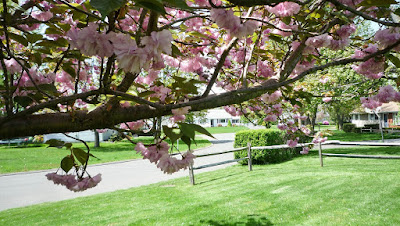 I've noticed this with a little dogwood we got two years ago: even with an insect boring problem, it still bloomed, although it looked terrible and didn't produce many leaves at the beginning. It seems they still bloom, no matter what.

cobbling a dinner together

Monday I made macaroni and cheese. That was the plan, anyway. I made the roux, then the sauce. I had only one bar of cheddar but almost eight ounces of leftover smoked gouda - good enough! I grated the gouda and reached for the cheddar - only to find that it was a bar of baby swiss! I had no idea how Swiss cheese would be in that dish and didn't think I should take such a chance: I told myself to be calm, and said a prayer for help. In the fridge I found half a container of cottage cheese, and maybe three tablespoons of grated Parmesan. That would have to do! I mixed it all up and added some rosemary. I then thought I could maybe use a little grated Swiss on top, so I grated some of that. Swiss cheese isn't salty at all, so I added salt and some onion powder, and then bread crumbs.

It was pretty good, actually. And I used up the cottage cheese, the gouda and the parm. We finished it up today. 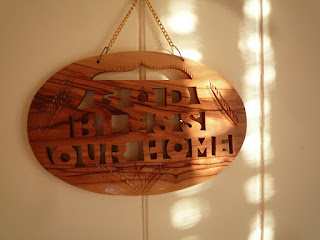 "It's now two weeks after Easter Sunday, and I suspect we've all returned to the routine of our lives. But according to this morning's Gospel, that's just where we can expect Jesus to reveal himself to us. 'Resurrection' does not happen apart from the routines of life but in them. Resurrection is not about escaping life but about becoming alive."


- from here, and I hope they don't mind 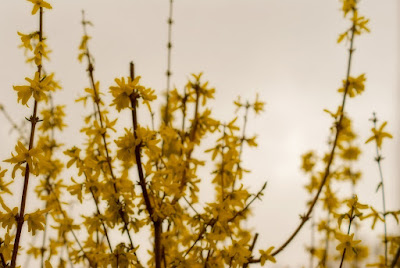 the quilt comes together

I originally began making this quilt because my knee was causing me a lot of doctor visits, x-rays, etc; I suddenly felt I needed a project. I began it, and then dropped it after having my wisdom teeth out - I was doing lot of reading then and didn't feel like sewing.

Now I've returned to it, and I have to say that as imperfect as it is, it's better than I thought it would be. 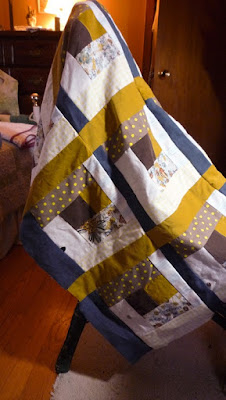 It's draped over my chair here. It was hard to get the colors right - the gold is warmer. Still, it's happening!
Posted by Lisa at 7:46 PM 12 comments:

There's man who comes in the library, and when I see him I always think he's English - I expect to hear the English accent when he speaks.  Everything about him - to me - says "English". But when he comes up to the desk, he has no English accent. He's American.

One day while waiting on him, we chatted a little. He told me he was English. They'd moved to Canada when he was young, and I forget how he ended up here. Funny! I did not tell him I thought he was English. But he came in today, and I was reminded of this episode.