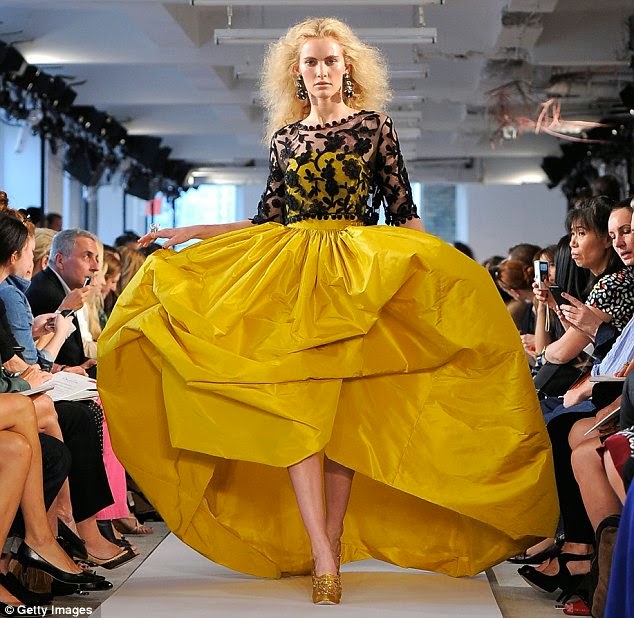 This Google image exemplifies what I think of in connection with Oscar de la Renta.  That full skirt, so much like something Cinderella wore to the ball. We know just what she wore to that ball, don't we?

Here's Emma Watson in a de la Renta gown - look at that skirt! 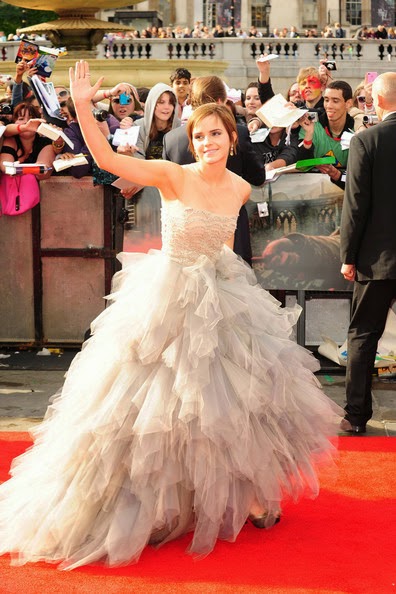 Never, ever confuse what happens on a runway with fashion. A runway is spectacle. It's only fashion when a woman puts it on. Being well dressed hasn't much to do with having good clothes. It's a question of good balance and common sense.
-  Oscar de la Renta

Henry in a new light 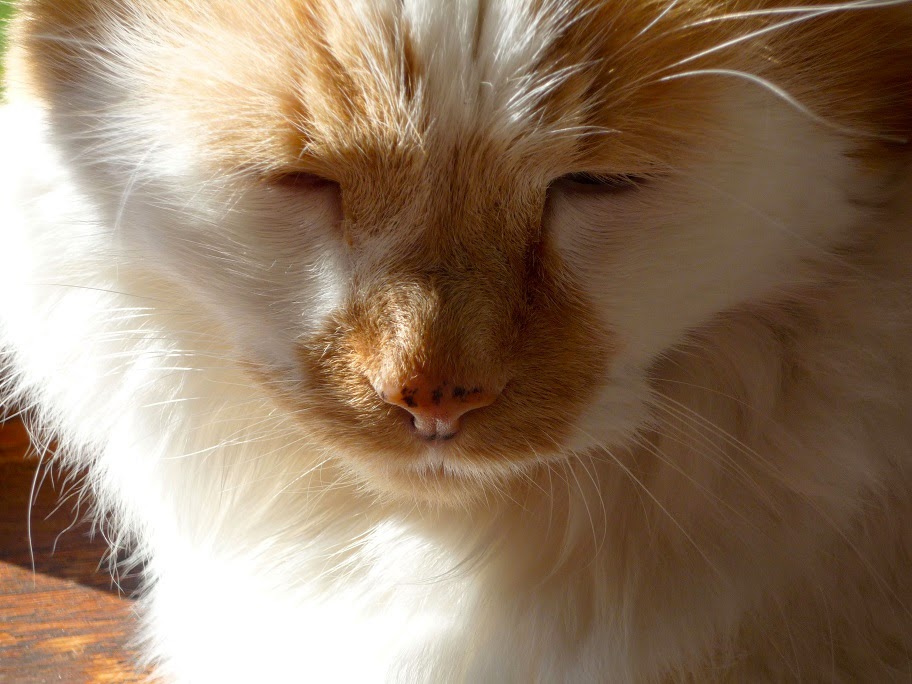 With all the Cindy-related issues around here, I am appreciating Henry's placid temperament more than ever before.
Posted by Lisa at 9:09 PM 3 comments: 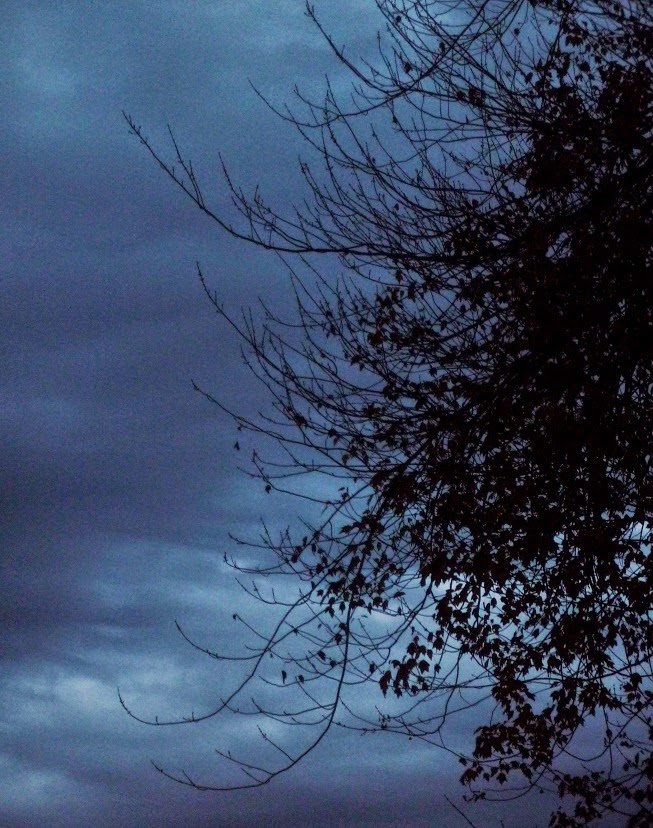 I really have no liking for Halloween, but I can't resist these little ghosts Trisha gives to the story hour children every year. 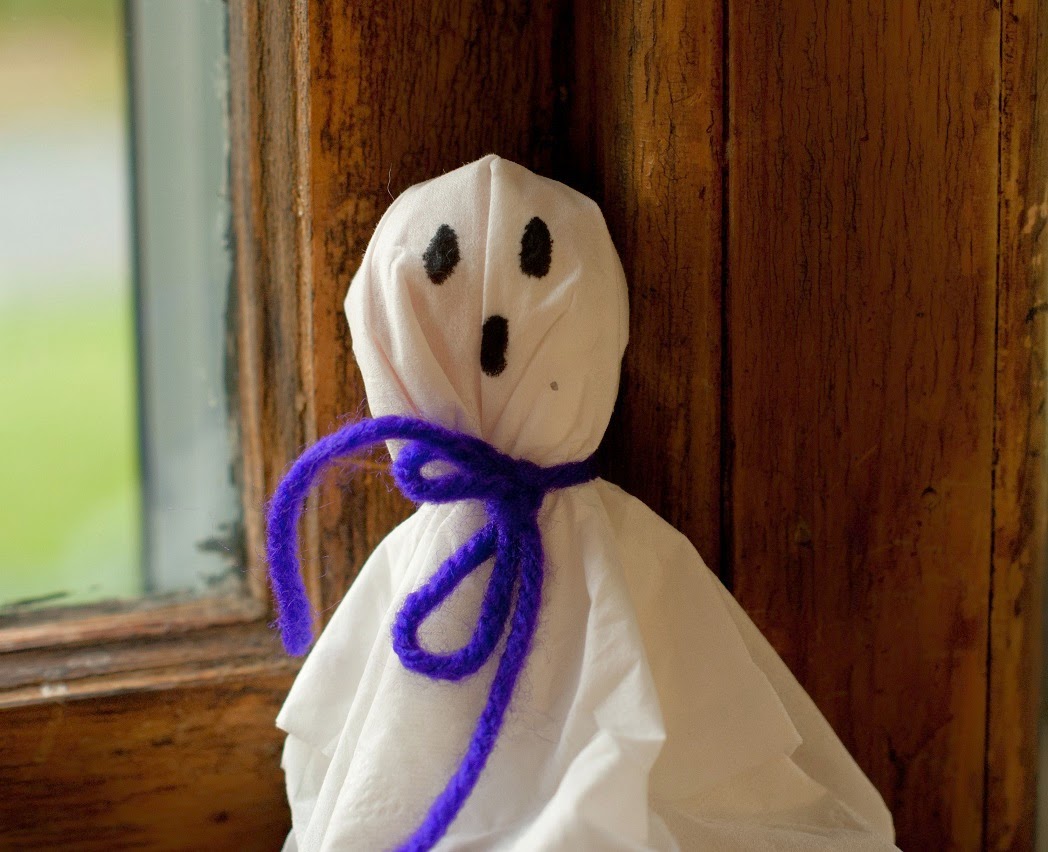 A Tootsie Pop with a kleenex over it, yarn tied around his neck and eyes and nose made with a marker. 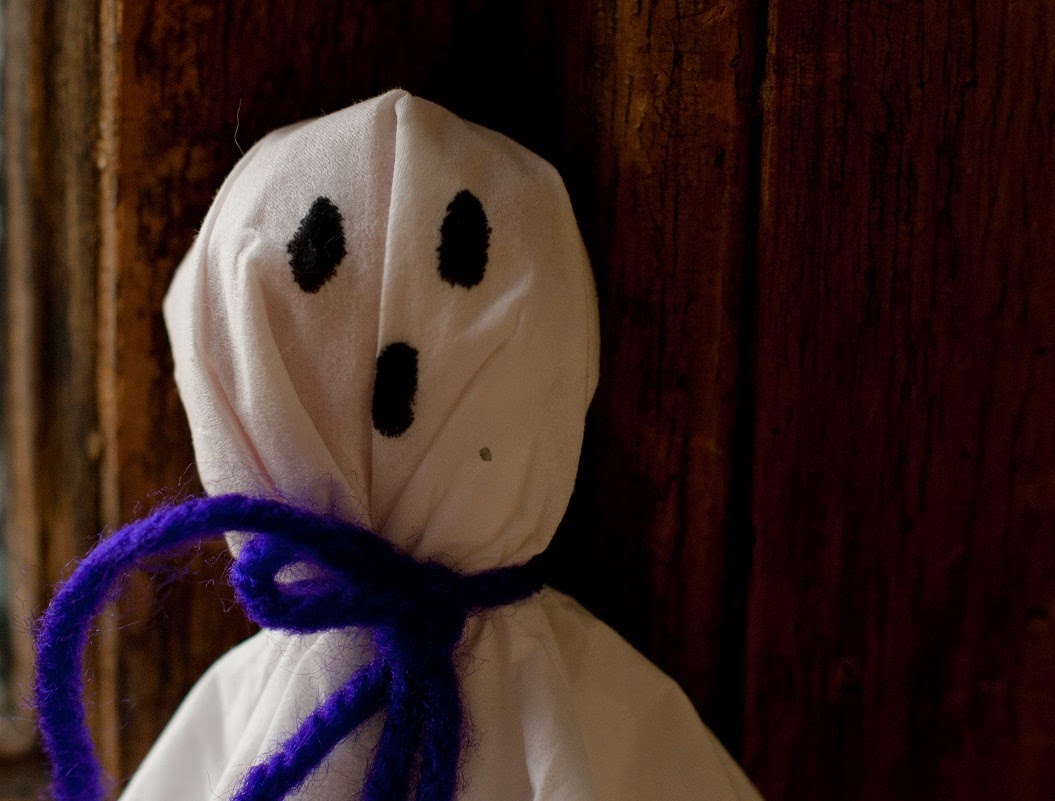 Email ThisBlogThis!Share to TwitterShare to FacebookShare to Pinterest
Labels: foolishness

heart and soul and mind 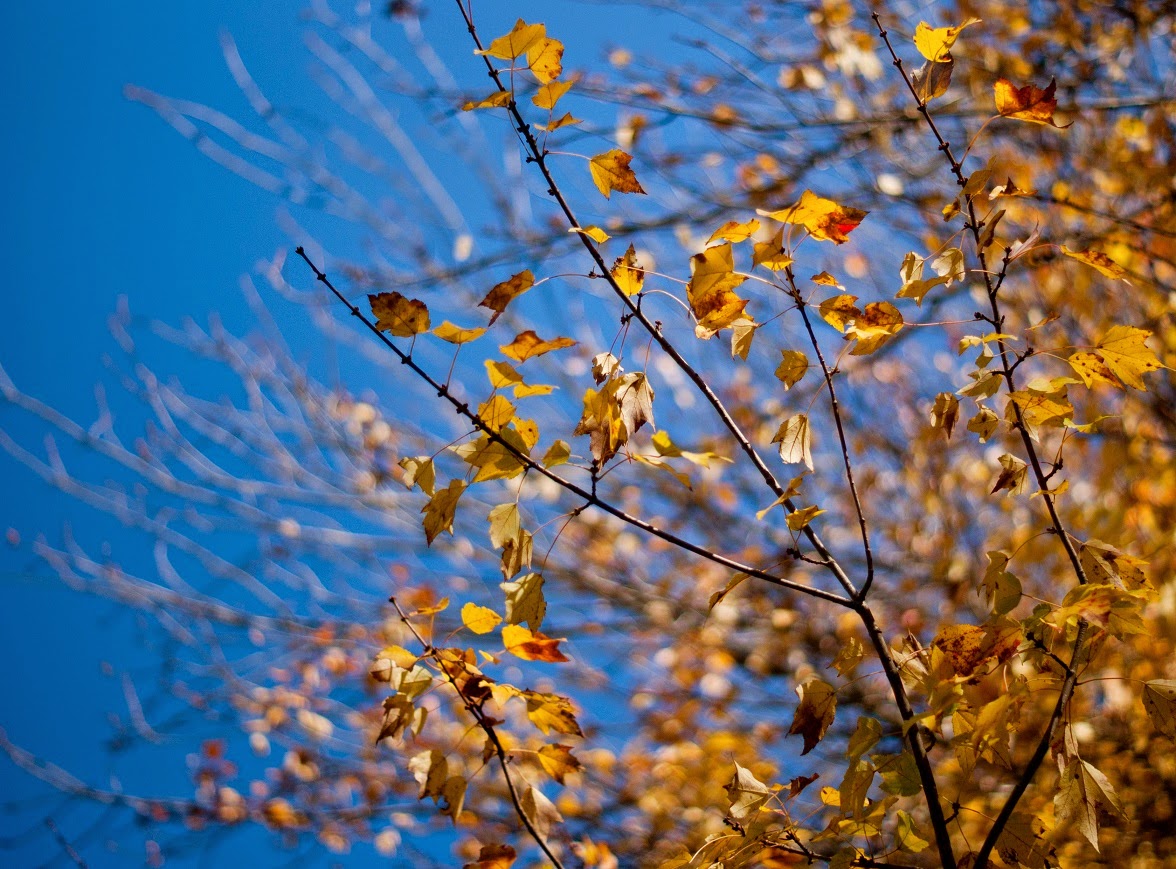 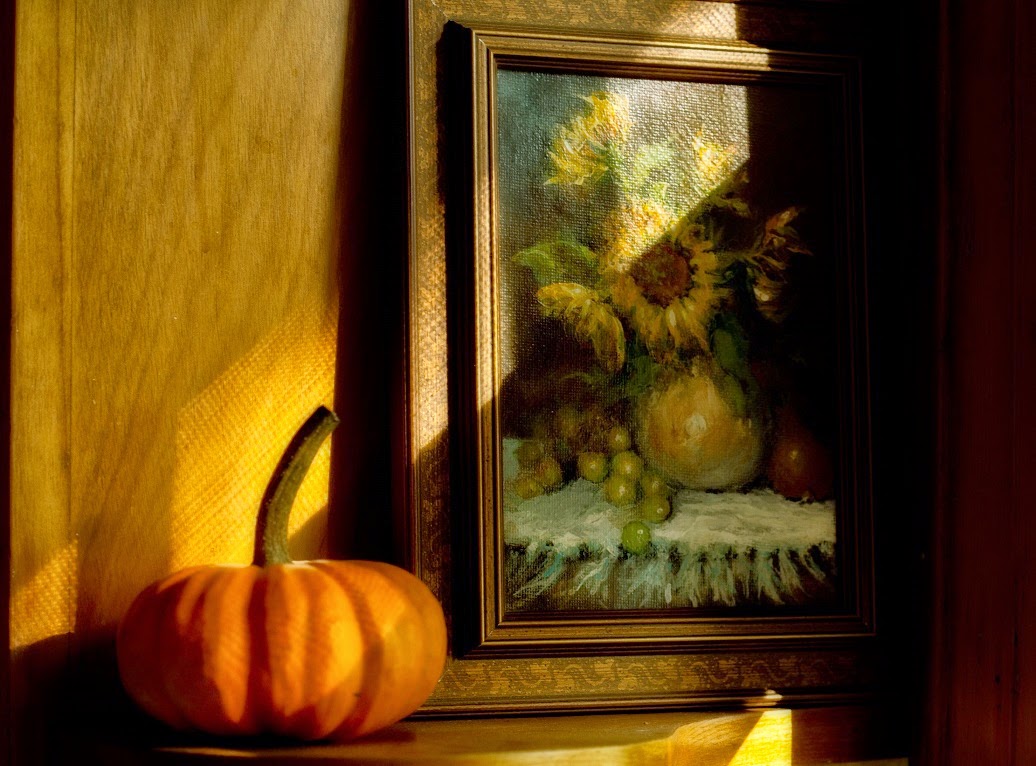 The youth group at church was selling (donated) pumpkins for a dollar. And the little ones for fifty cents!  Perfect for the small shelves over the kitchen sink.
Posted by Lisa at 3:50 PM 4 comments:

When Valerie pinned this recipe I knew I had to try it right away. A cake which contains rye flour! Couldn't resist it. I had canned pumpkin in the pantry (wasn't going to use that lovely pumpkin I roasted yesterday - we ate that at supper!), so I was ready. 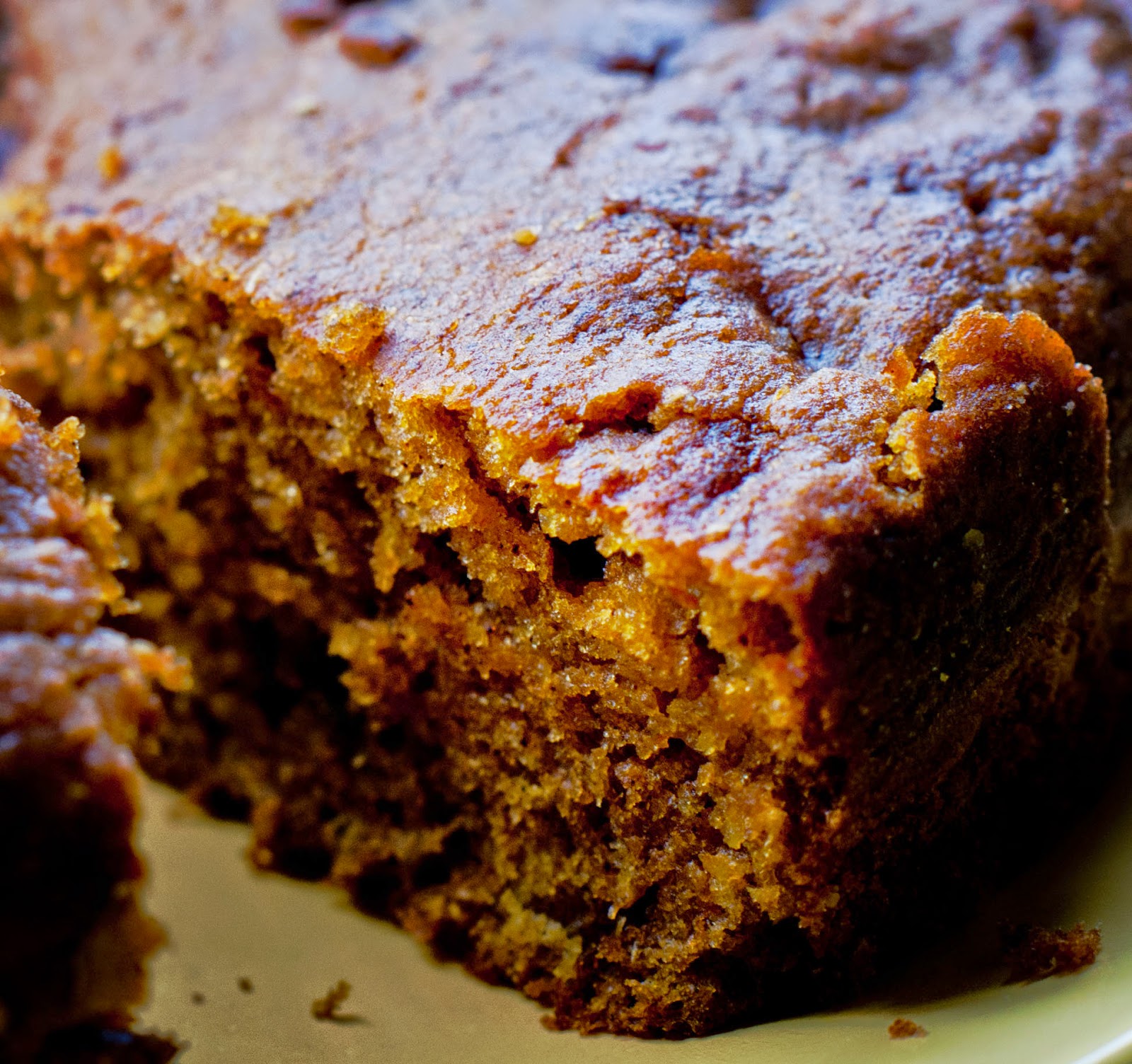 It was no harder than mixing up muffin batter - entirely by hand, even though I had to weigh all the ingredients, and that did take a little longer.

But what a find: a cake with some wholesome grains and veg in it, and so fast and easy to make that it could be done with short notice. I will keep this recipe and make it again!
Posted by Lisa at 9:17 PM 1 comment:

I don't know about you, but when a recipe tells me to peel a pumpkin or large squash, I say no way. I did try it once a long time ago - a waste of energy.  So this morning I took our pumpkin, washed it, and poked it all over with a thin, sharp knife. It went into the oven at 350 for an hour, at which time I was able to cut it into quarters. Still, I wanted it softer so I put it back in for thirty or forty minutes more. 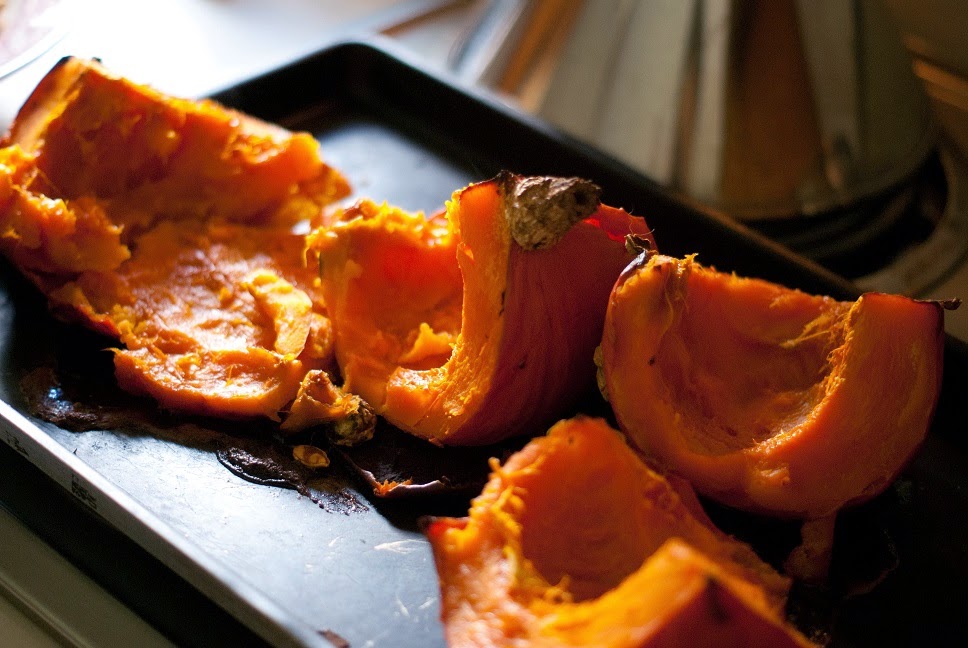 Oh, so nice and creamy!  And lots of seeds for my muesli.

This is the last of the vegetables my brother's nice client had given us - an eggplant, butternut and spaghetti squashes, two big beets, garlic bulb, one red and one yellow onion and this pumpkin. Thank you!

*I have since found out that it was a Sunshine squash! Sure looked like a pumpkin to me.
Posted by Lisa at 4:34 PM 4 comments:

"I am still determined to be cheerful and to be happy in whatever situation I may be, for I have also learnt from experience that the greater part of our happiness or misery depends upon our dispositions, and not upon our circumstances; we carry the seeds of the one, or the other about with us, in our minds, wherever we go."

-  from Martha Washington, an American Life, by Patricia Brady 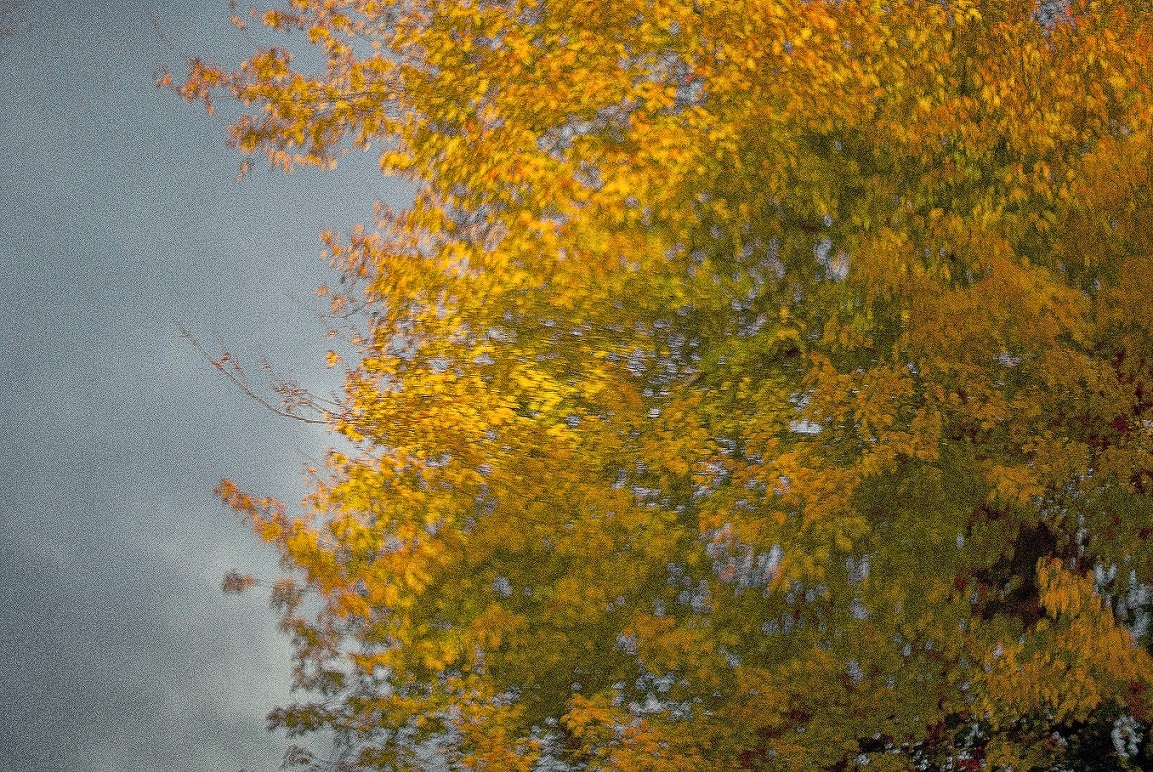 "If today is so horrendous that...you can't find one moment to enjoy, one simple pleasure to savor, one friend to call, one person to love, one thing to share, one smile to offer; if life is so difficult you don't want to bother living it to the fullest, then don't live today for yourself."


"...I have learned, in whatever state I am, to be content. I know how to be abased, and I know how to abound; in any and all circumstances I have learned the secret of facing plenty and hunger, abundance and want. I can do all things in Him who strengthens me."

tree of many colors

The maples this year have been incredibly colorful - I don't remember so many colors all on the same tree at one time, so showy even on the rainiest of days. 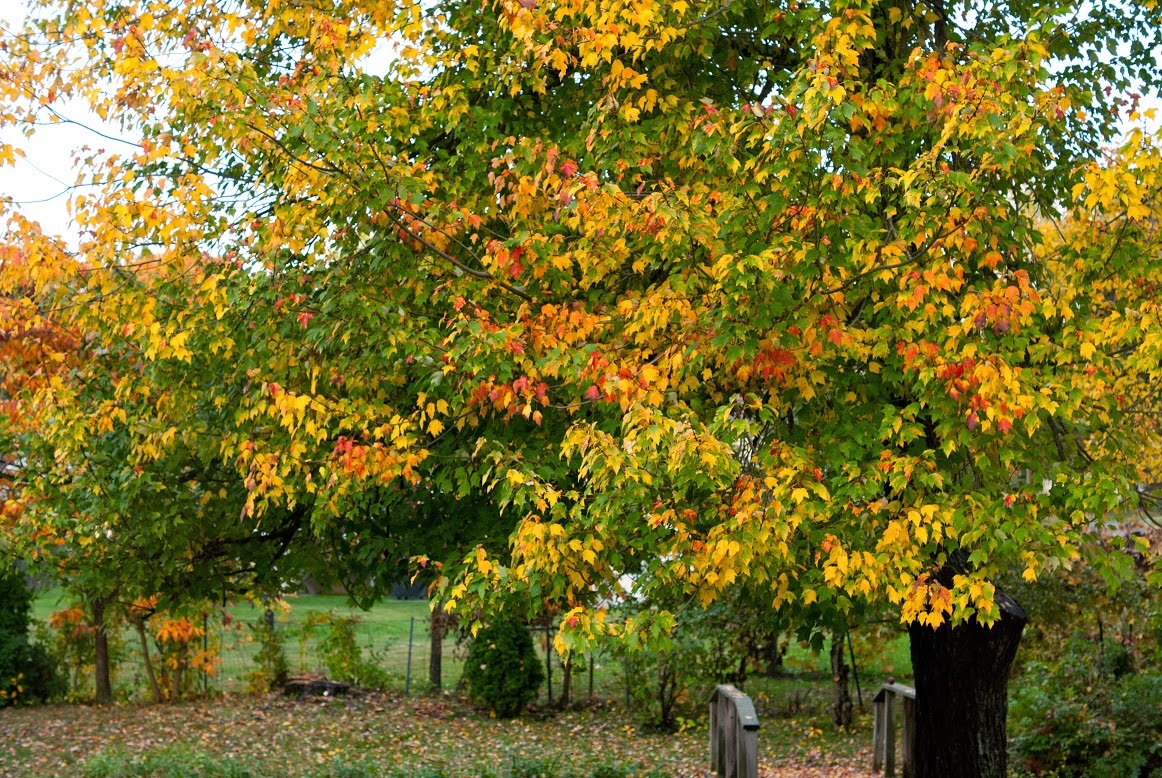 help for a too-large neckline

I got an idea that my black linen dress was roomy enough for a jumper, so started looking for something of a thin fabric that I could wear underneath. I found a very thin Anthropologie tee, but the scoop neck was rather low. When I tried it on with the dress only the sleeves were visible; I wanted to see if I could raise up the neck area a little. A whole inch, actually, was what it needed.

I know the proper way to take up a shoulder seam is to rip out the stitches at the shoulder, but that's too much work - also, when your top is fitted that could make the armholes too snug. But I've accomplished it the lazy way many times and it always works for me. I needed to take it up one inch. So, starting at the neckline end of the shoulder seams I stitched it at an inch, and then as I approached the shoulder edge, angled it so the seam disappeared into the existing seam. Does that make sense? 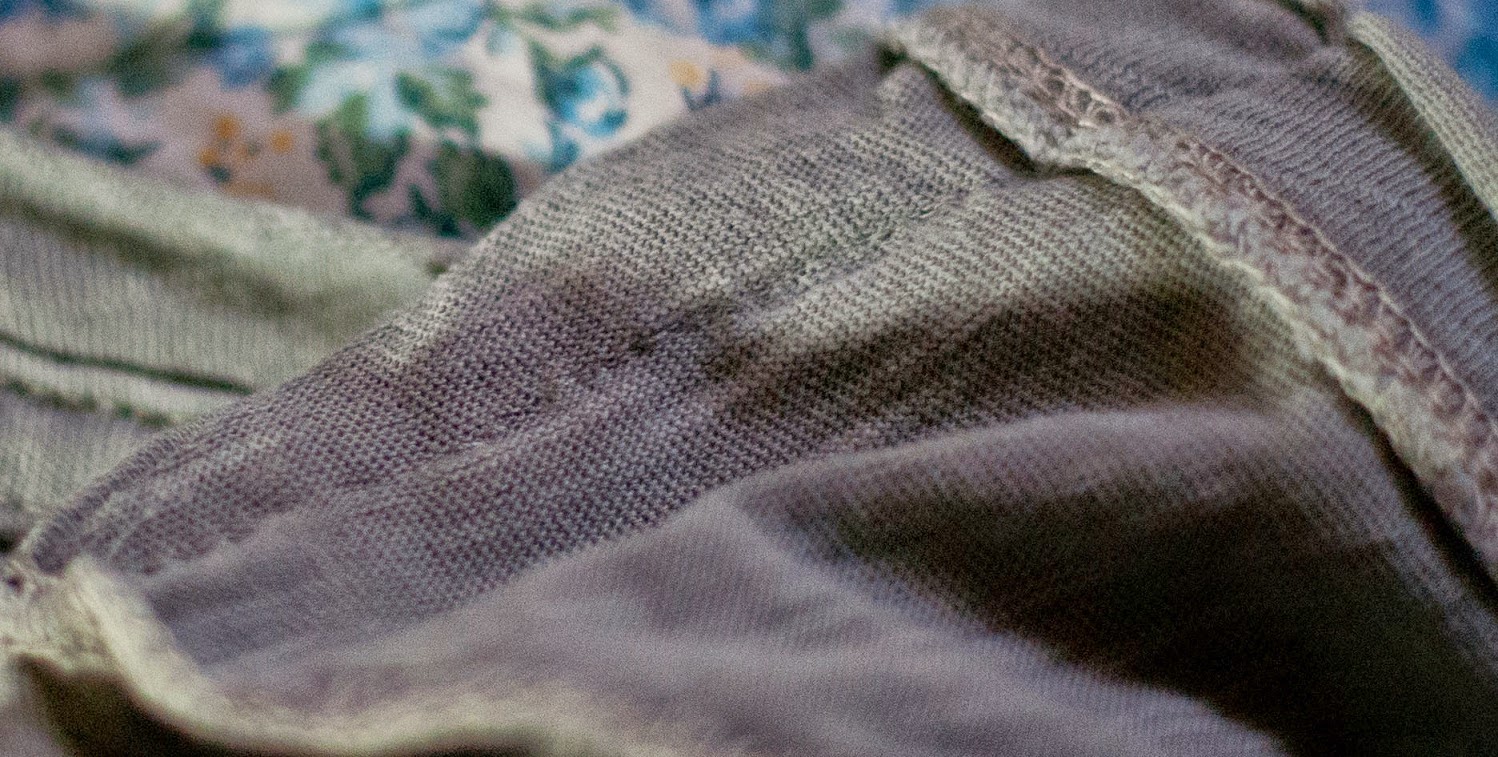 Can you see in this picture that on the left side (where the shoulder is) the stitching line I made is at the original seamline? But on the right, where the neck edge is, I've gone diagonally to take it in an inch at that end of the seam. It's a bad photo, I know. But I'm hoping you're getting what I'm saying.

I always baste it first, then try it on again before sewing with the machine. So that's what I did, and it was an improvement, so I finished it up, then trimmed off the seam allowance and zigzagged (even though knits don't fray). It brought it up to where at least some of the neckline was slightly visible beneath the jumper. 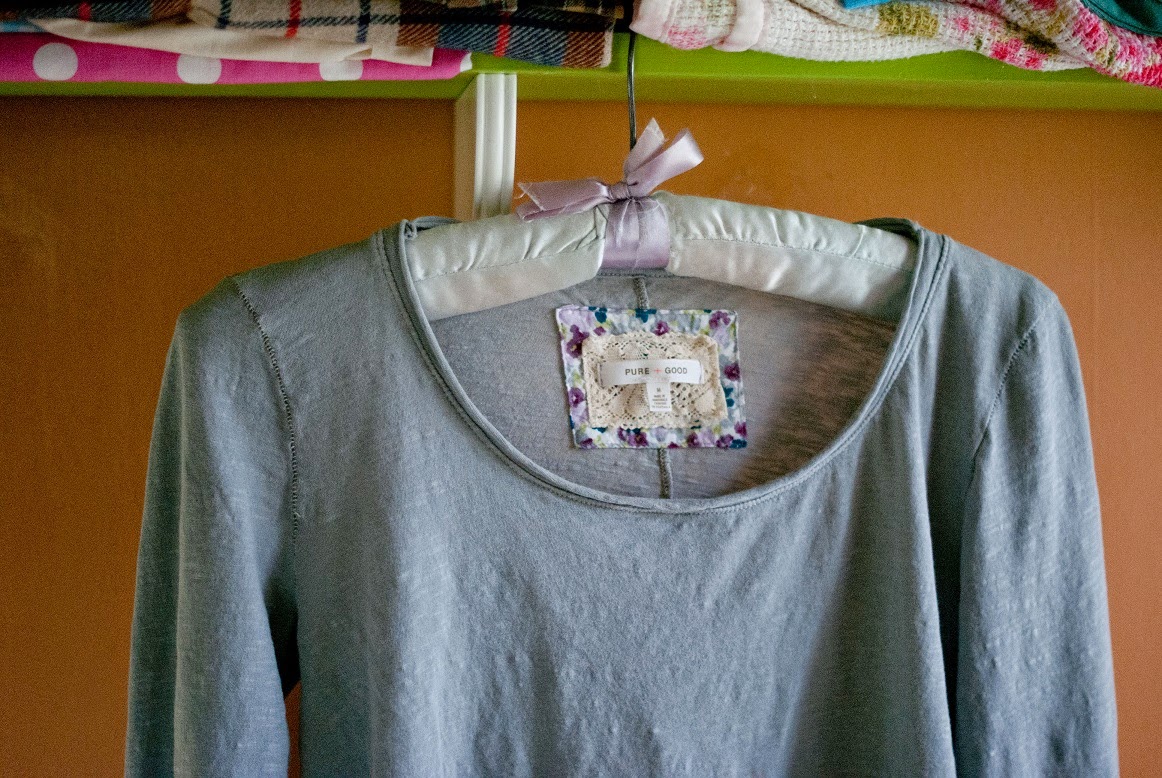 As you can see, it looks fine - you'd think it would look funny after taking it up in that angled way, but it doesn't. Even so, that's why I always baste first and make sure it looks all right. I have done this many times over the years for a gaping neckline, which is a problem for me and my narrow shoulders - it helps. So maybe if you have that problem it will help you, too.
Posted by Lisa at 9:04 PM 2 comments: 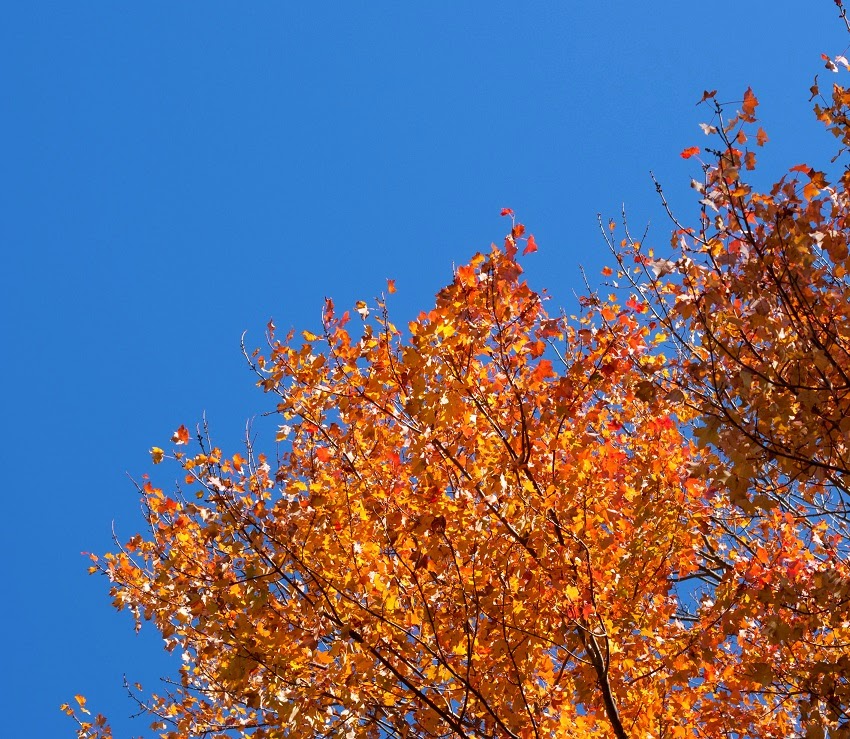 He had three ships and left from Spain
He sailed through sunshine, wind and rain. 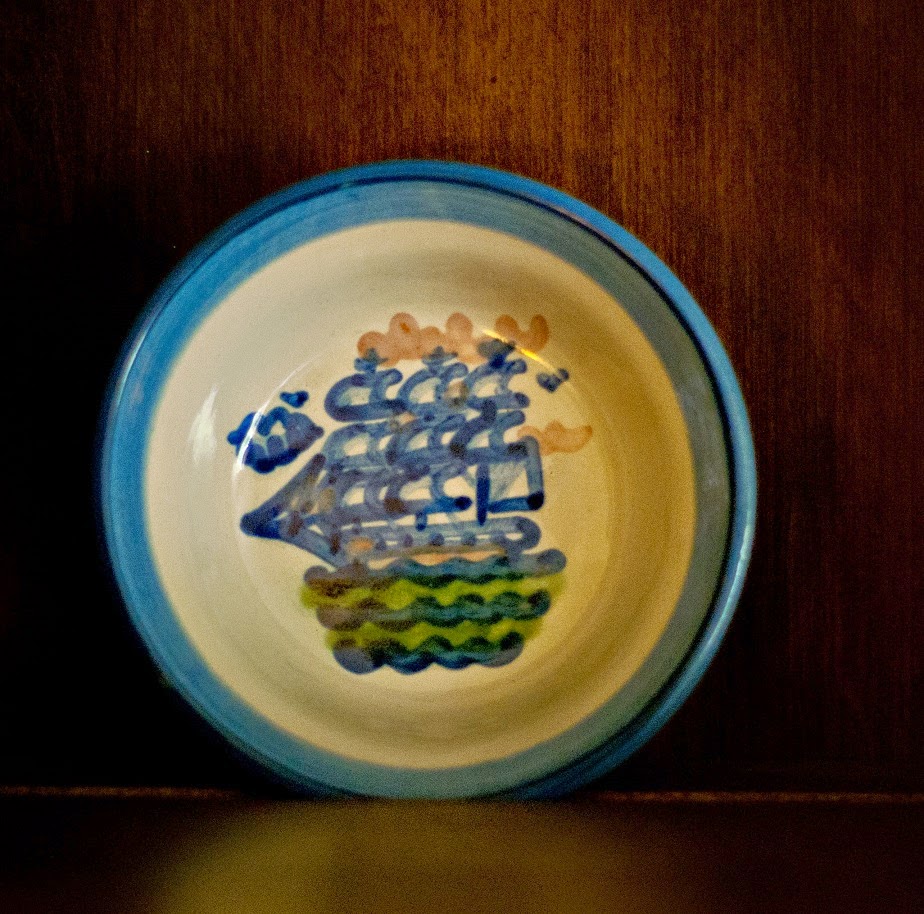 In 1992 replicas of the three ships came to our area, so we went. They were small! The Santa Maria was the largest and it was quite small!  My conclusion - they were out of their minds.  :D 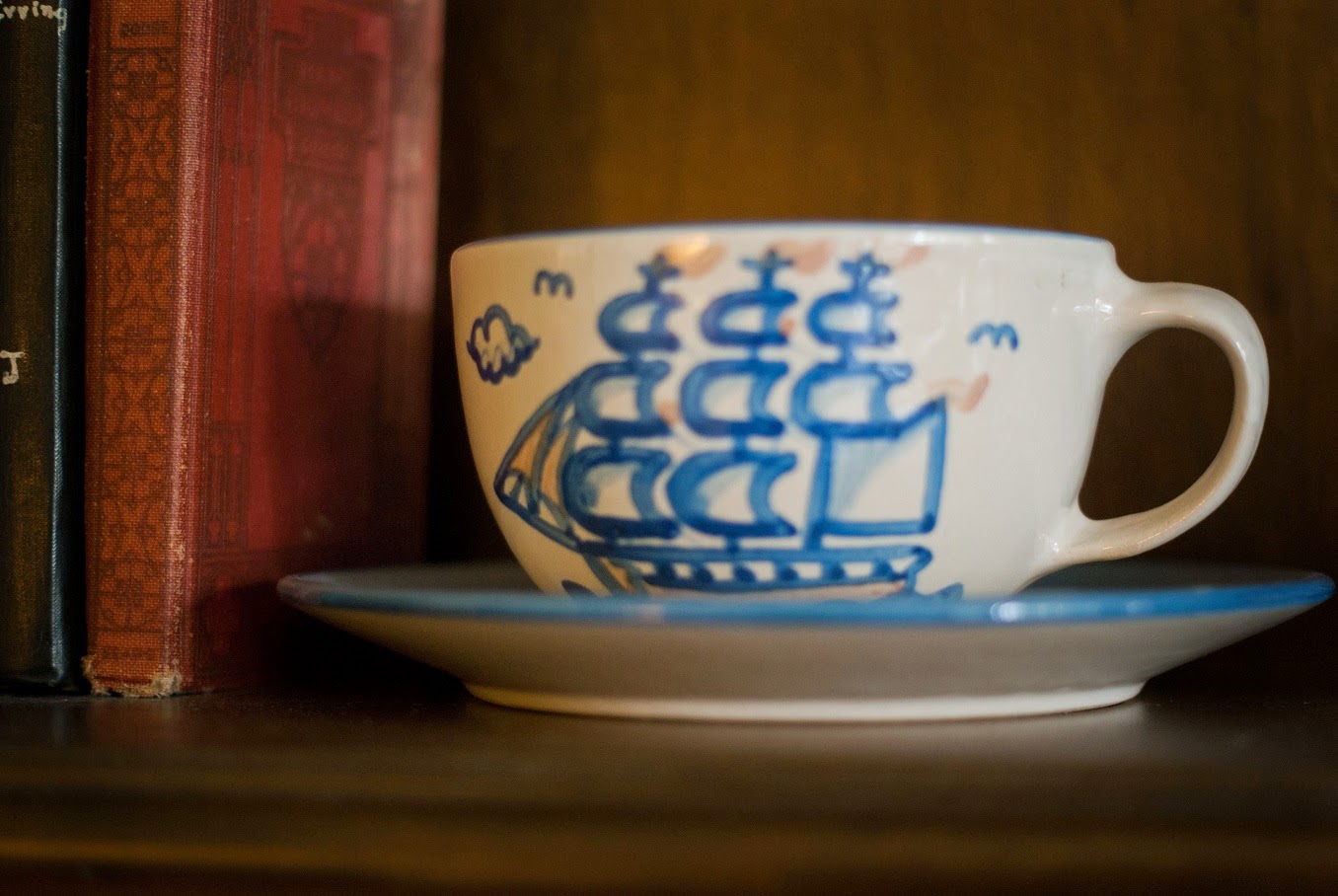 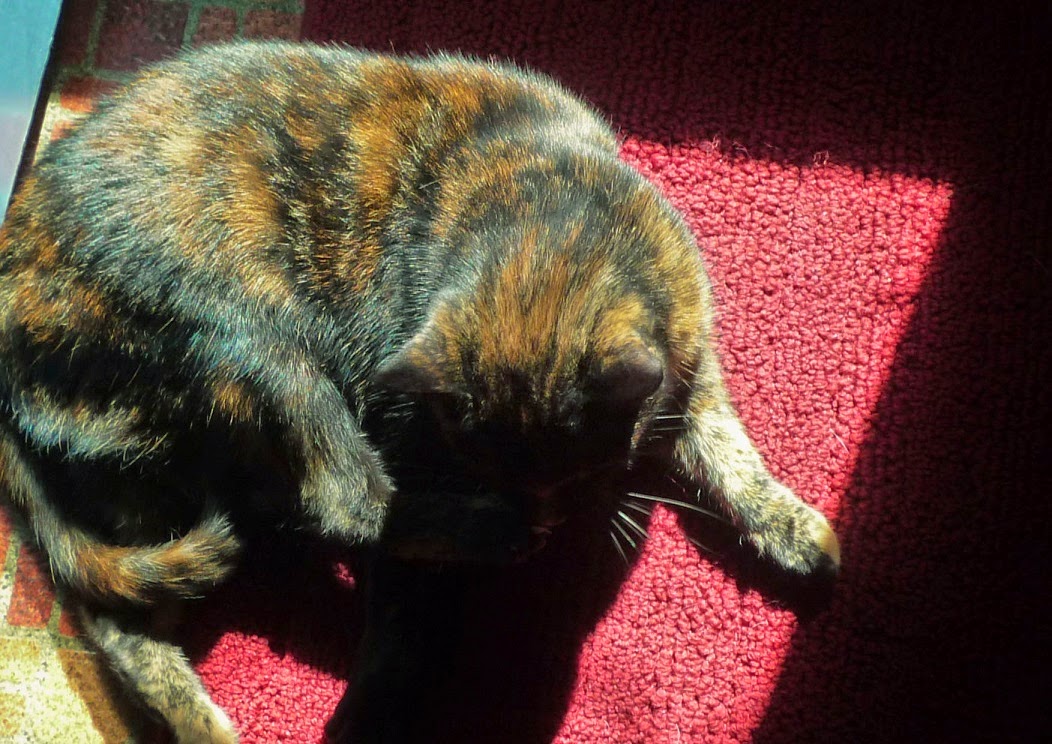 Cenerentola is Italian for Cinderella. I know this because Rossini wrote an opera by that name, and I saw it on tv years ago.

Cindy could be a nickname for Cinderella, couldn't it?

It's also Columbus Day, so we've come back around to the Italian theme.  I have no idea what it may mean, but our Cindy is no Cinderella. In fact, she's more like the step-sister who makes the heroine's life miserable.

And that's what's happening here. Cindy is very lively and very aggressive. She bothers both cats, but Dolly mostly, and I mean she attacks Dolly frequently and Dolly, who is a mild-mannered person, has taken to hissing and even growling for the past month whenever Cindy comes near. I don't see any end to this behavior, because Cindy wants to be number one, and Dolly will always be our Number One. And she doesn't seem to realize that "getting along with everybody" is another option.  But she isn't all bad - she has cute ways. She purrs the minute you pick her up. She will jump into your lap when she sees you sitting and will curl up and fall asleep right away.  She would be a fine pet for someone who would keep her inside, give her affection and have her as their only pet.

We are hoping to find such a person.  Meanwhile, a Happy Birthday to you, Cindy. It would be nice if you could act like a little princess, just for one day.
Posted by Lisa at 10:47 AM 10 comments: 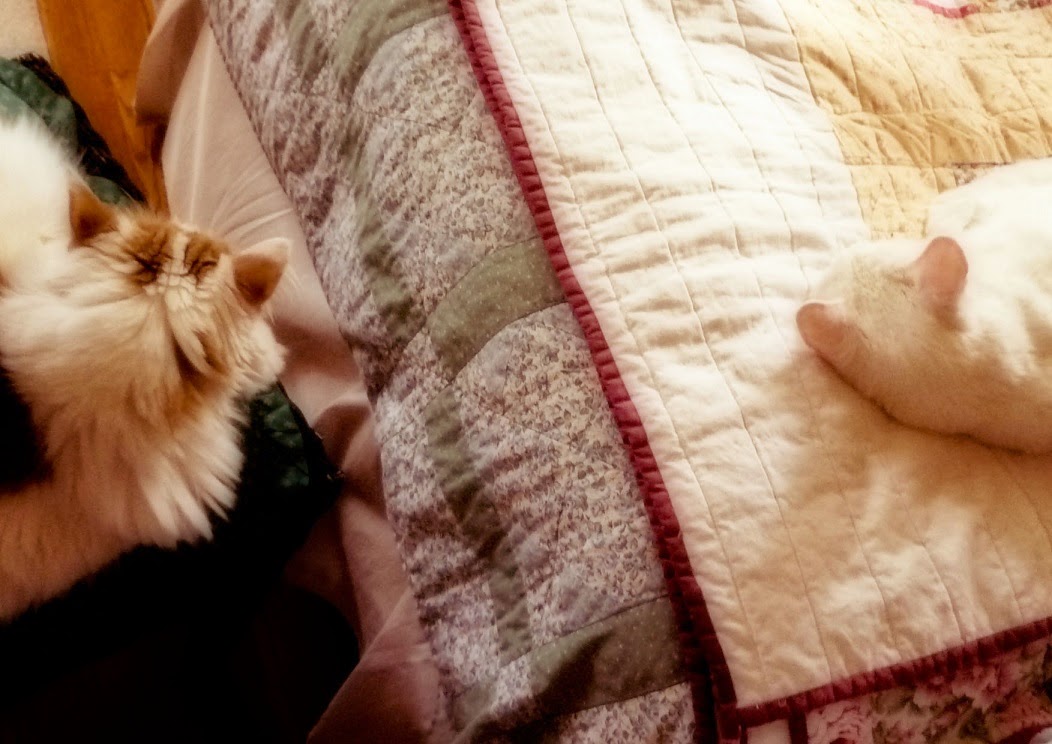 the two well-behaved ones, I mean.
Posted by Lisa at 8:55 PM No comments: 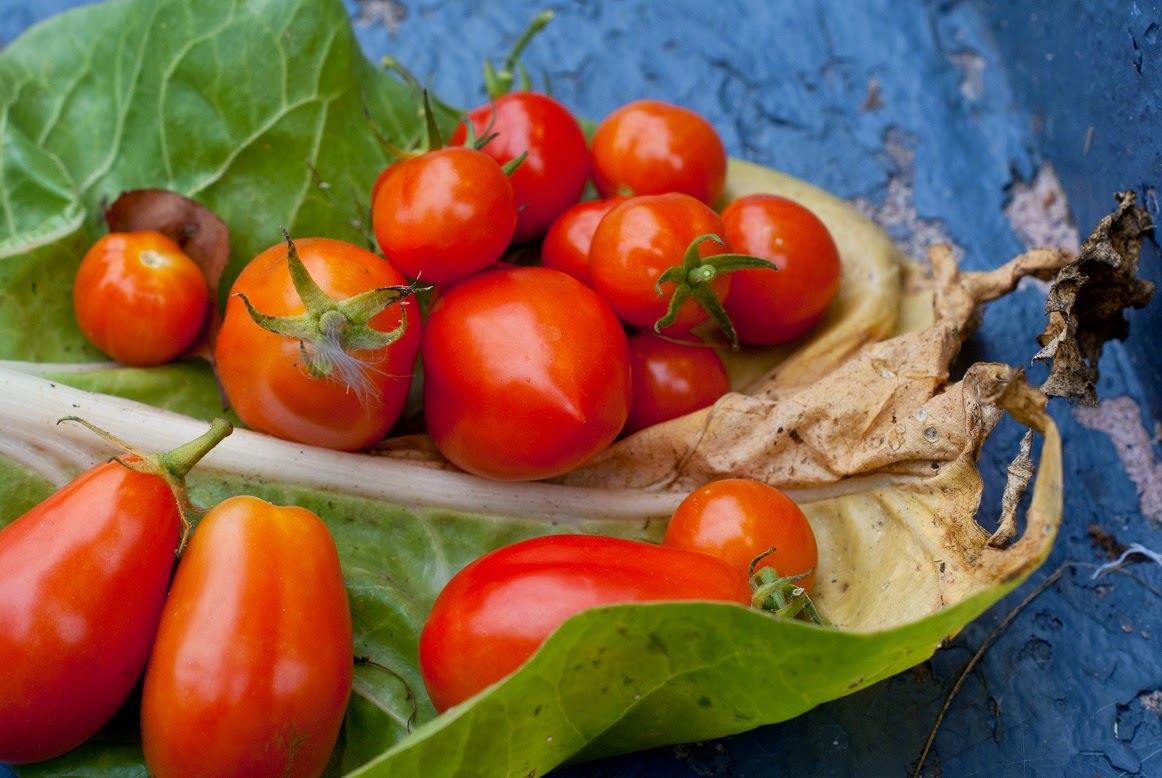 of tomatoes - plum and cherry.
Posted by Lisa at 7:27 PM No comments:

"There are some things you learn best in calm, and some in storm."

- Willa Cather,  from Simple Abundance
Posted by Lisa at 8:18 PM No comments:

Kierkegaard, a philosopher who loved Jesus very much, affirmed that God has created two categories of people: heroes and poets. The hero is the one who accomplishes great deeds and even does battle with death. The poet does not do impressive deeds, but he sings about the hero and is enthusiastic about the hero; he is as happy as if he were the hero himself, because his own genius can be expressed in sheer admiration and devotion. When he has found his hero, the poet goes from city to city and tells people that they too should admire the hero.

ahead of the crowd 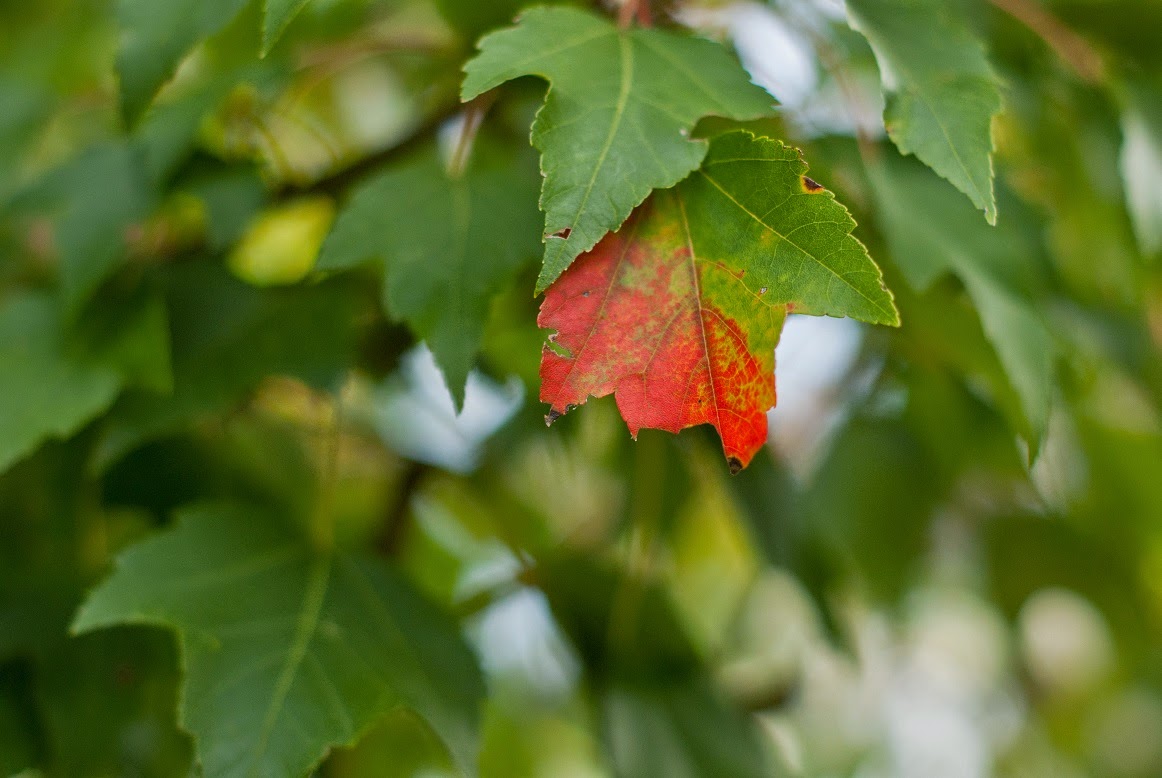