She sleeps with me every night; she was just on my lap as I was typing. 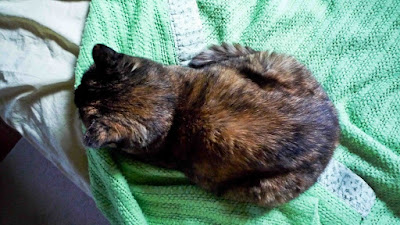 Last night my brother referred to her as "the barnacle". 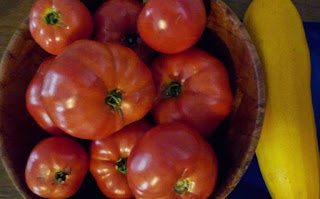 I've discovered how delicious a garden tomato salad can be with a bit of crumbled blue cheese and vinaigrette.
Posted by Lisa at 9:12 PM 6 comments:

I've been reading a new and very, very interesting book, The Inner Life of Cats, by Thomas McNamee. One chapter treats the feral cat issue, particularly in Rome, with more than 100 cat colonies; in one colony called Largo Argentina the population density was equivalent to 38,000 cats per square mile.

"But studies have shown that where food is abundant, cats develop completely new systems of sociality that can allow for high density. Picture how New Yorkers and Parisians preserve their dignity on a crowded subway car."

In 1988 the Roman authorities forbade euthanasia of any cat or dog except those incurably ill or fatally injured, and in 1991 the Italian Parliament proclaimed that feral cats had a right to live free and couldn't be moved from their colony.

There is a metro station in the city called Piramide (pyramid)  and "Adjacent to the Pyramid is their nighttime prowling ground, the leafy, cool Protestant Cemetery, where John Keats and Percy Bysshe Shelley are buried...Many of the monuments are fancifully ornate examples of the gravestone-maker's art, and the whole place is impeccably kept. Somebody, doubtless from the gattare (local cat lovers who leave food, and watch out for them, etc.), evidently picks up the cat poop, because there's none to be seen... Someone - the city of Rome? the volunteers? - has hidden audio somewhere in the ruins, so that at night the cats have classical music playing for them." (emphasis mine) 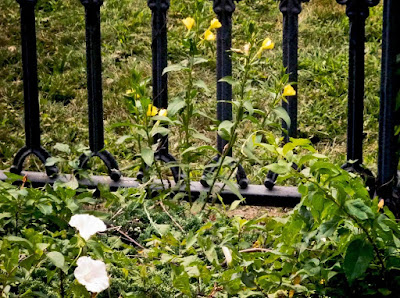 Surprise flowers, that is, growing outside the kitchen window at work.
Posted by Lisa at 8:25 PM 2 comments:

If there's an occasion which has some relation to my life, my beliefs, my interests, I want to observe it. Life's too short to ignore these. There was a partial eclipse today in our area - a reason for a picnic outdoors! 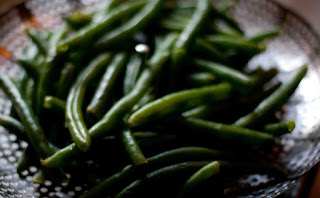 Ahead of time, I steamed green beans and popped corn. I dug up some old but still good D batteries and got the boombox outside so we could hear the classical station play sun and moon music (e.g., Clair de Lune, the Moonlight Sonata, Helios Overture  -  even Holst's The Planets).

The party started at 1:25 and ended at four, which is when it all happened. Our friend conveniently brought eclipse glasses, but my brother had made a viewing box just in case. Dolly also attended. (of course) 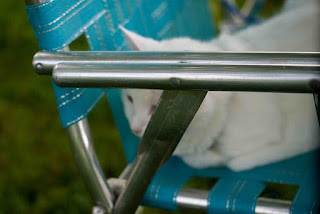 First, we had snacks. Izze Blackberry carbonated fruit drink and ranch-flavored popcorn (idea courtesy of Magnolia Journal).  The moon was going to cover one third of the sun; it was hot, humid and partly cloudy, but nothing that would obscure our view of the sixty seven per cent eclipse. I was pleased that even though the weatherman said the temperature wouldn't drop, it felt much better to me for much of the event, and only hot again when it was over. But it's funny that if you didn't know an eclipse was happening, you might well have missed it. It was just a matter of there being less sun, but clouds were coming and going anyway. My brother thought the light on the bridge looked artificial. 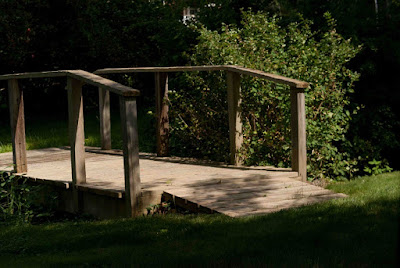 You tell me; I don't know, but he looks at things with an artist's eye, and I just look at them (and not too keenly at that). Anyway, we then had a big pasta salad with marinated artichokes, green beans, cucumber and black olives, with garden tomato on the side.

A sunny area across the brook: 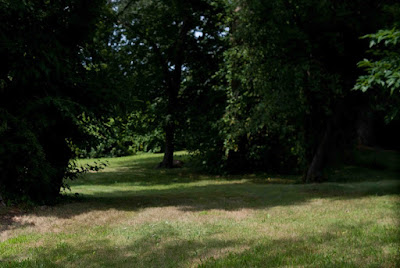 You'd think, with two thirds of the sun covered, that it would have been darker than this. But anyway, it was nice that it happened on my day off, and nice that we got to experience it. 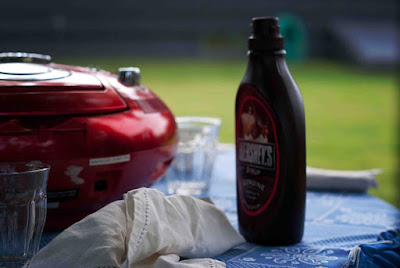 Afterward we had ice cream.
Posted by Lisa at 7:23 PM 8 comments:

Dolly and I are taking every opportunity for snatching alfresco hours. 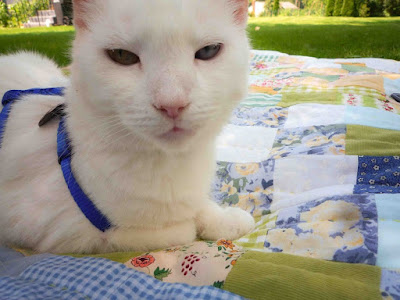 I finally got this quilt bound. After four years. It's a fine size for putting under a tree and lounging. 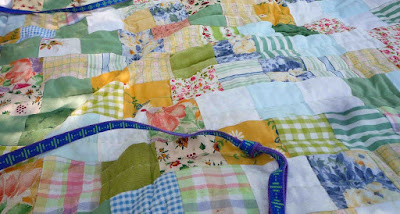 Dolly's ablutions prevented her from appearing in this photo, but at least her leash was G rated.
Posted by Lisa at 10:36 PM 6 comments:

avocado pits in a glass

I just can't throw the avocado pits away - they look like burnished wood. 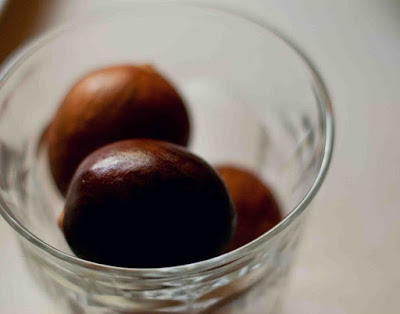 Email ThisBlogThis!Share to TwitterShare to FacebookShare to Pinterest
Labels: form

"It would be utopian to imagine that the present-day world could go into reverse and completely reorganize itself.

We have...come to believe that contemporary life wears women out, debases the family, and crushes the human capacity for thought." 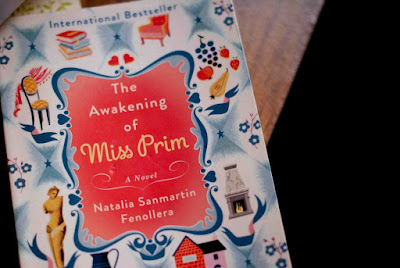 On whose blog did I first see this book? All I remember is that, curious, I sent out for an inter-library loan, it came quickly, and I couldn't put it down.

It's a story of a well-educated, modern woman who gets a job in a town that may as well be from the past, as far as beliefs and outlooks go. It takes her a while to see the value of this way of living. The author has something definite she wants to say, and I am just amazed that such a book can have been written today. A light, pleasant read with a serious message.
Posted by Lisa at 12:07 PM 15 comments:

Anna's blog has been such an inspiration to me over the years, and when Debra needed help planning the decoration for her reception, she came instantly to mind. 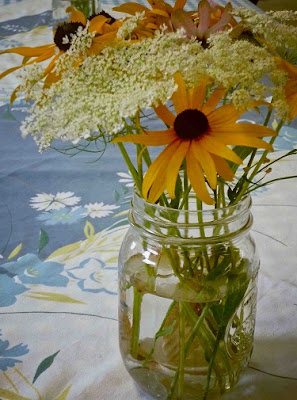 Anna is a busy person, but she seems to take on what comes her way with gladness, as coming from the Lord. And she uses what's available as if it came from God's hand, too. She hasn't said this to me, but that's my take on it - and I think I'm right. She doesn't want to waste time, so she won't be found wringing her hands over things; she just does what she can and then enjoys the rest. No looking back, like Lot's wife.  ; )  So I told Deb to just look around at Pleasantview Schoolhouse and she'd find plenty of inspiration. 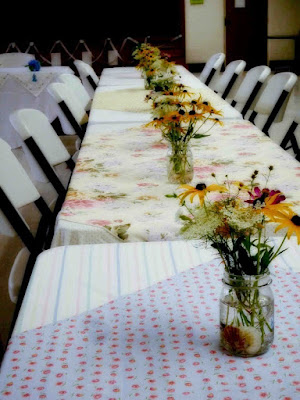 We ended up pooling our tablecloths, fabric squares and sheets together for table covers and the whole effect was so much prettier than we ever imagined. I gave up all my pint mason jars and Debra cut wildflowers the night before - each table got two of those. 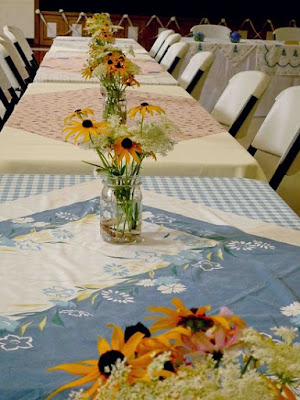 She works full time and cooking all the food wasn't possible, so she got our favorite luncheon spot to cater - we made the appetizers. But, get a load of this salad - they know the importance of presentation: 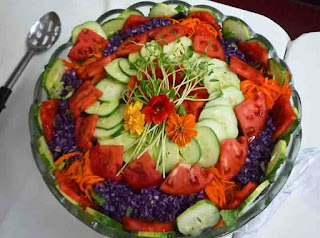 They also put a nasturtium on the pasta salad! (that's why we love going there) 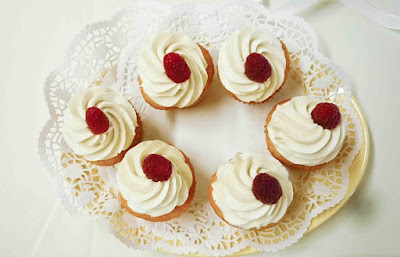 gluten-free lemon cupcakes from a local health food store - there was a cake, too

Entertaining on that scale was new to both of us, very interesting, and original, thanks to blogging friends.

the importance of mornings

"You see, here our philosophy is that everything important happens in the morning." 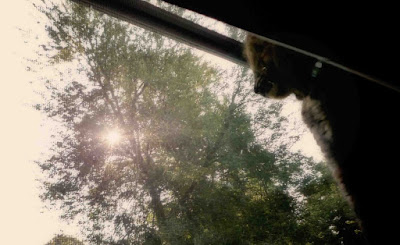 Debra's son was married a few hundred miles away this spring. Saturday was the reception here for those who couldn't attend the wedding, and I helped her out with a few things. 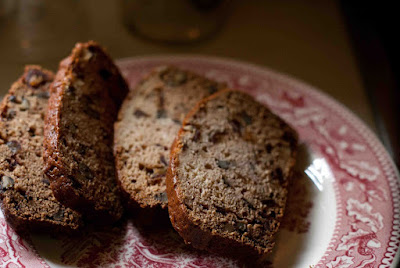 Looking for a simple yet appealing appetizer recipe is daunting - most are not simple at all, so we went with the gut and served bite sizes of assorted fruits, skewers with mozzarella balls, grape tomatoes and I forget what else (not my department) and those very small date nut bread/cream cheese "sandwiches" (my department).  Sensible!
Posted by Lisa at 9:49 PM 5 comments:

Our apples are quite small, but getting some red on them. The other day I picked one, then braced myself to cut it open. They're always imperfect in some way - gnarly on the outside, streaky on the inside, but this year they're so smooth-skinned, I had to ease my curiosity about the insides.  It was normal! I hope they stay that way. 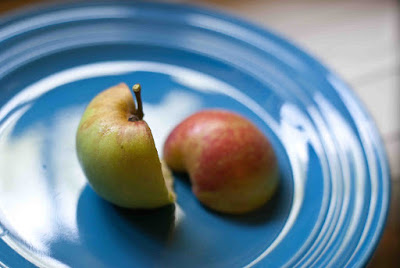 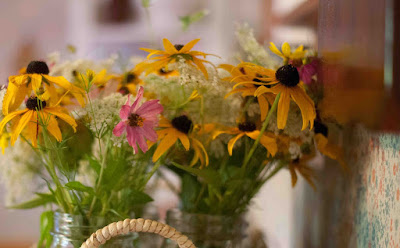 Several mason jars of wildflowers for the kitchen. A perk for helping Debra plan and set up a reception for her son and his bride.
Posted by Lisa at 9:52 PM 4 comments:

Email ThisBlogThis!Share to TwitterShare to FacebookShare to Pinterest
Labels: flowers

"a condition of the Divine energizing"

"In every department of life, physical or spiritual,... there must be a stretching forth of the withered arm before it receives strength."