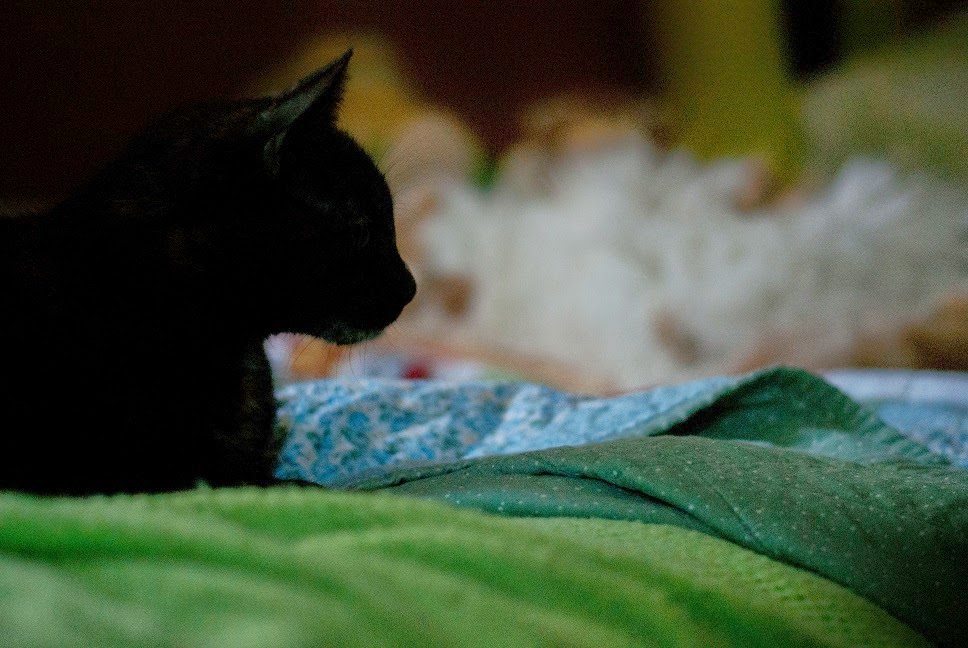 My neighbor is planning to move, and she said to me, "You once told me this was pretty - do you want it?" 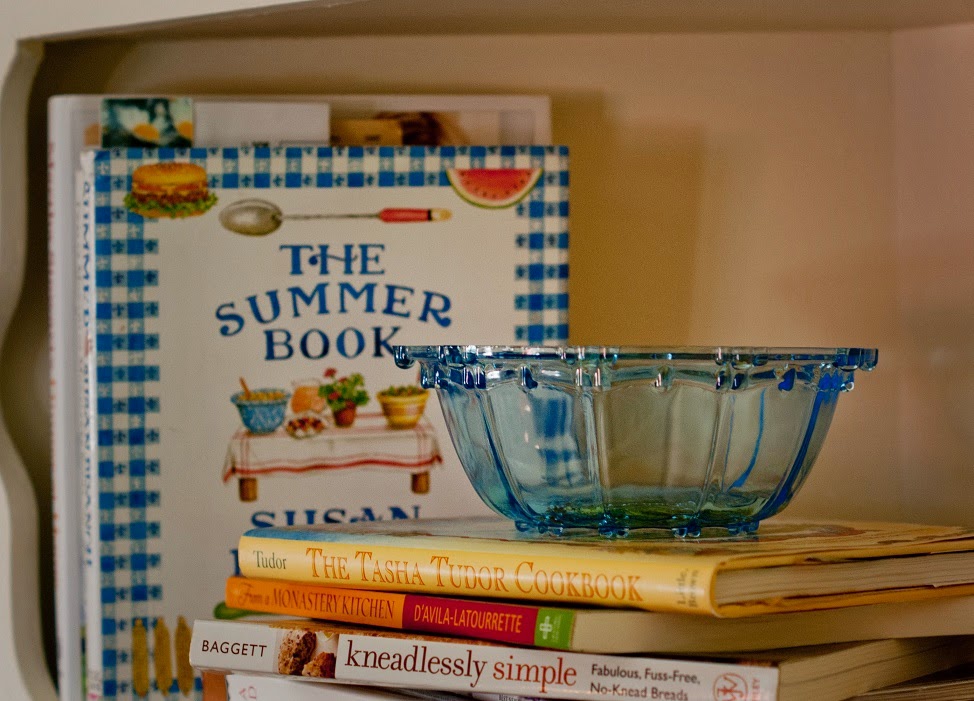 I guess after this, I'll have no reason to forget that fritters are a nice thing for supper once in a while. 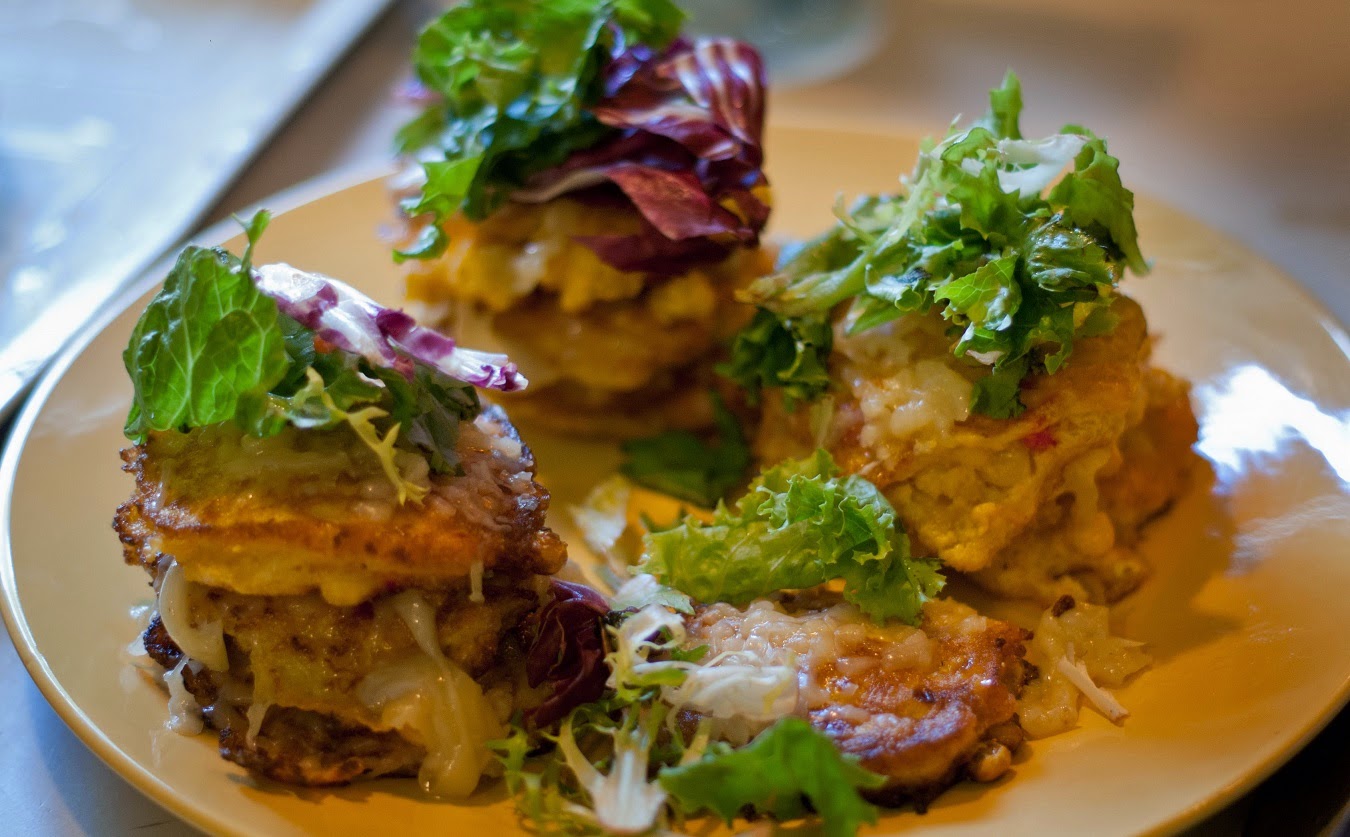 I made this recipe (from Country Living magazine) for my midsummer party, and it not only looks good, but is good, and very simple. Unlike so very many recipes, it went along just as they said it would, except I ended up with ten cakes rather than twelve. If you've got a bag of frozen corn kernels, you've probably got all the other ingredients you'd need for this. I'm going to make it again, maybe on Friday.
Posted by Lisa at 8:00 PM 1 comment:

I sing the mighty power of God,
that made the mountains rise,
that spread the flowing seas abroad,
and built the lofty skies.
I sing the wisdom that ordained
the sun to rule the day;
the moon shines full at His command,
and all the stars obey.

I sing the goodness of the Lord,
Who filled the earth with food,
Who formed the creatures through the Word,
and then pronounced them good.
Lord, how thy wonders are displayed,
where'ever I turn my eye,
if I survey the ground I tread,
or gaze upon the sky.

There's not a plant or flower below,
but makes Thy glories known,
and clouds arise, and tempests blow,
by order from Thy throne;
while all that borrows life from thee
is ever in thy care;
and everywhere that we can be,
Thou, God, art present there. 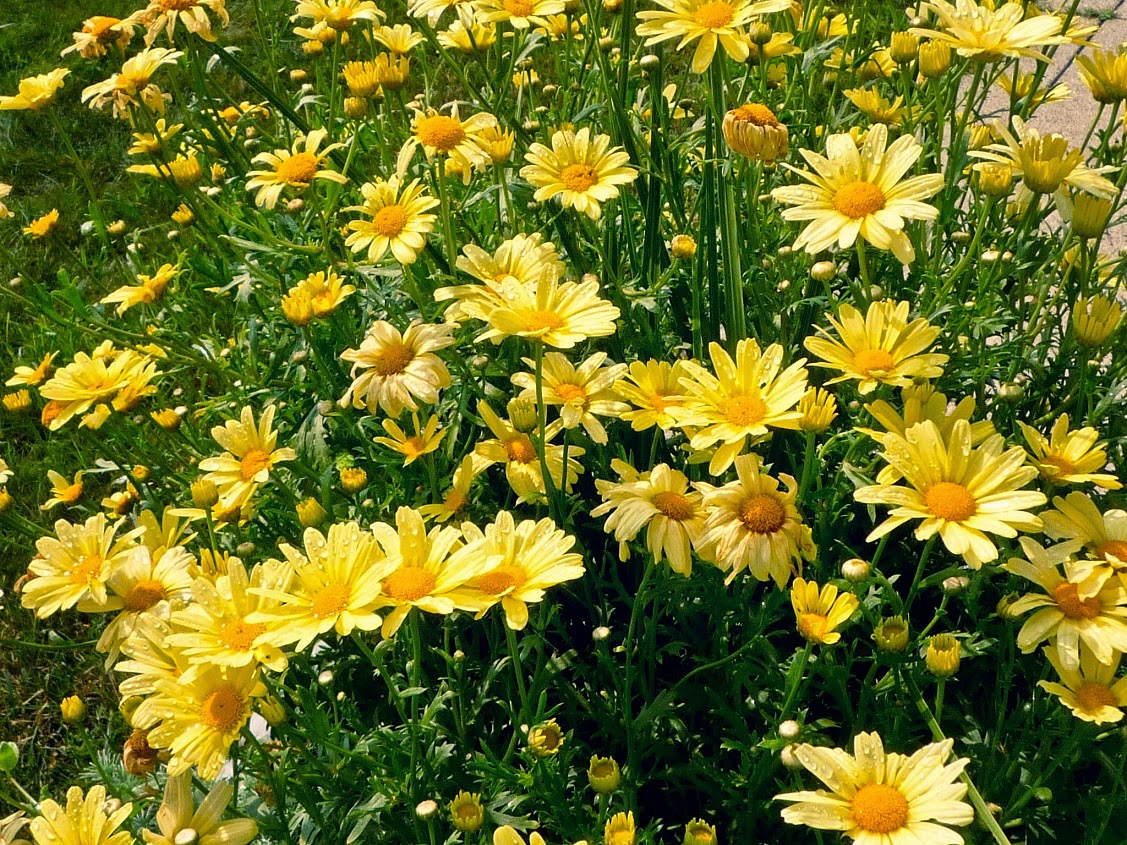 I tried Anna's Schoolhouse Baked Beans. The reason being that it seemed very like something my mother used to make, and I never knew her method. So, I tried Anna's. 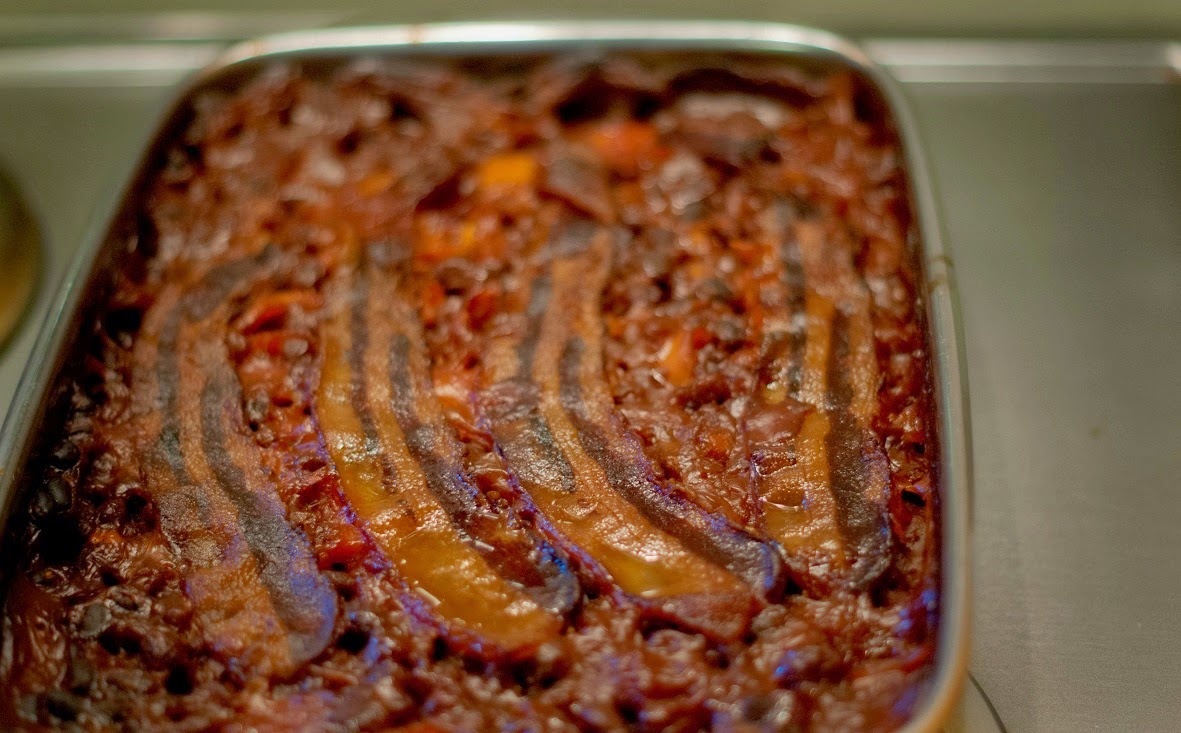 It has a nice flavor, but it got a little thick - I won't cook it so long next time. My mother didn't use any bacon, but had cut-up hot dogs in hers. And plenty of onion, which may have been sauteed with the hot dogs, but I'm not sure. Anyway, this is good and now I've got a starting point.
Posted by Lisa at 11:48 PM 1 comment: 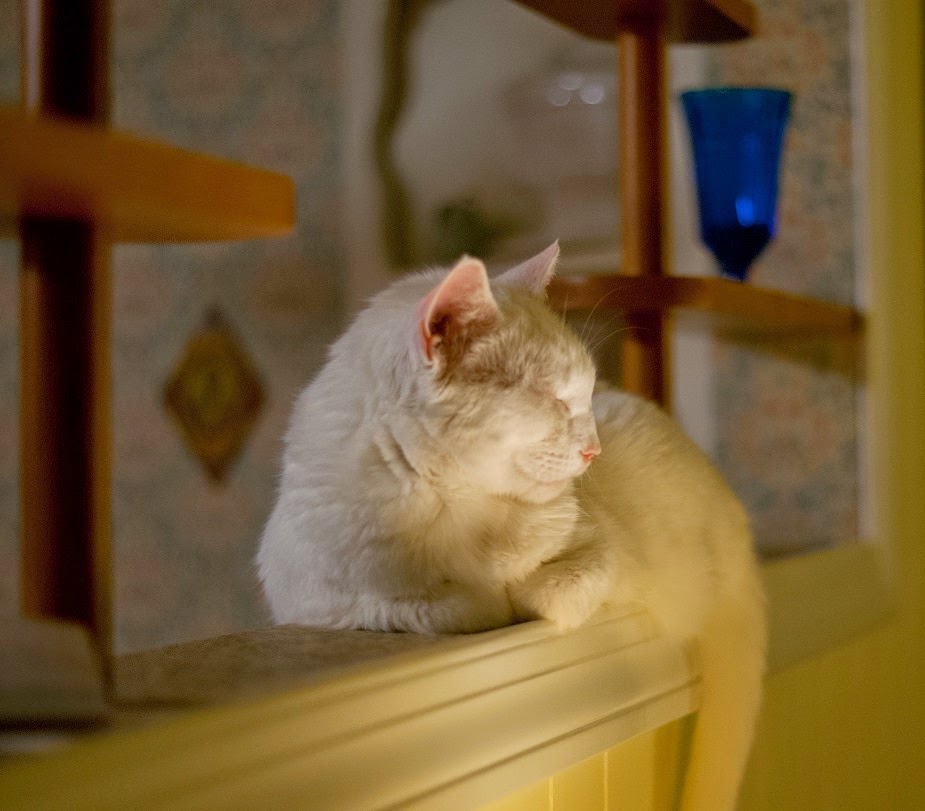 A Polish woman came up to me after Mass last week to tell me she's a grandmother. I know her very little, but that's okay - she was telling everybody!  I thought I'd make a baby blanket. 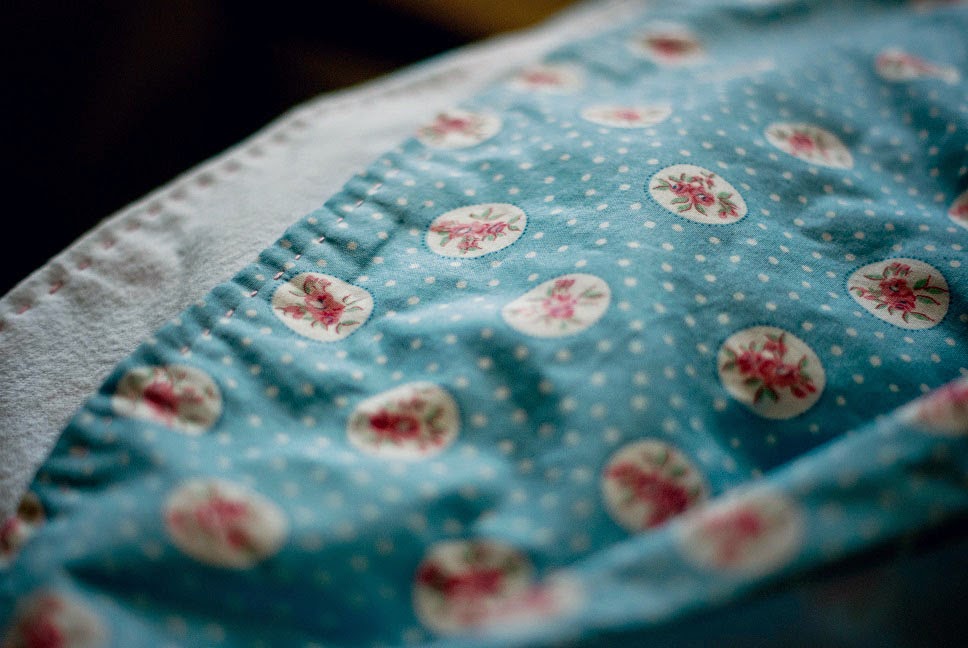 A piece of quilting cotton with a piece of cotton flannel. After sewing, then turning it right side out, now I'm hand stitching around the edges with pink floss, like these, all the way around.
Posted by Lisa at 7:42 PM 5 comments:

This morning a man came into the library with a photo of a bear he'd seen at a lake in our town. It was standing near a tree, and looked pretty big - he said it was a young bear; he came in to make copies of the photo. He says there's a mountain lion living three towns away.

I've seen him in the library before; he has a German accent and is willing to talk. Somehow the subject of birds came up. "Do you know", he said, "that it's illegal in Europe to feed the birds in summer?" Well, I know they say it makes them dependent on you and that isn't good, but he said one reason is that if they're eating your seed, they aren't eating bugs - esp. mosquitoes. That makes sense, doesn't it?  But he also told me that the birds bring the hard-shelled seeds to their young, and the babies die because they can't digest the hard seed shells. Is this true? Two good reasons to stop feeding birds except in winter, when they need the help.


Yesterday morning my brother took a short walk and came upon a little sparrow who'd been injured - bounced off a car, maybe? One eye was gone and the head injured; but it tried to sit up when he took it, so he placed the birdie under a bush. When he got home he drove with a box to get it. He put the box with birdie on a cloth in my greenhouse, for a warm place, and tried giving it water with a dropper.

I continued after he went to work. But the poor little thing wasn't opening his mouth for me; there was blood under his head, and he didn't last too long. I thought my brother'd want to bury him, but he said he doesn't bury birds - it doesn't seem right since they aren't earthbound creatures. So his little body was placed inside a dense arbor vitae for a natural resting-place. Good night, little prince.
Posted by Lisa at 9:58 PM 2 comments:

Email ThisBlogThis!Share to TwitterShare to FacebookShare to Pinterest
Labels: feathers

This used to be a forsythia. It got taken over by these wild roses. I look around the yard at the brook's edge and they are everywhere, blooming, blooming. I guess they're invasive, if roses can really be called invasive.  I remember once, years ago, pruning some of it - before blooming began - and I threw it toward the brook in an area where we tended to throw clippings. When June came, they bloomed. They were just cut branches, and they bloomed! I tell the truth.

That would be scary if it was anything but roses. 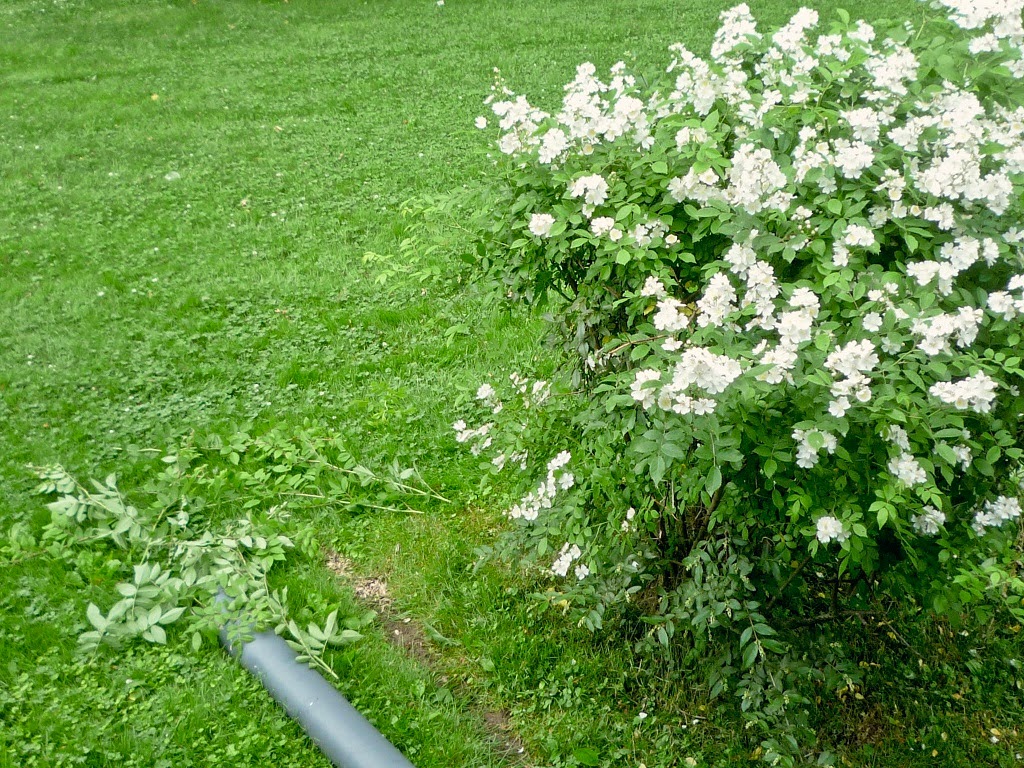 And right now, the air is sweet with them. So, I pruned some up-sticking canes from this big weed-bush and now it's nice and neat. Bloom on!
Posted by Lisa at 7:33 PM 5 comments:

"The life of God is lived within us, within the deepest center of our being. Man becomes truly himself precisely at the point where he recognizes that the highest and brightest Being dwells within him. Moreover, he will rediscover himself and his own identity, as well as his faith in his own individual value, mission, and life options, to the degree that he comprehends human life as streaming forth out of the mystery of God. Then all that is negative and threatening is surmounted, its futility is exposed from within and simultaneously disempowered."

- Father Alfred Delp,  a German Jesuit priest condemned to death by the Nazis.

I guess all Cindy's attacks on Henry really don't mean anything - 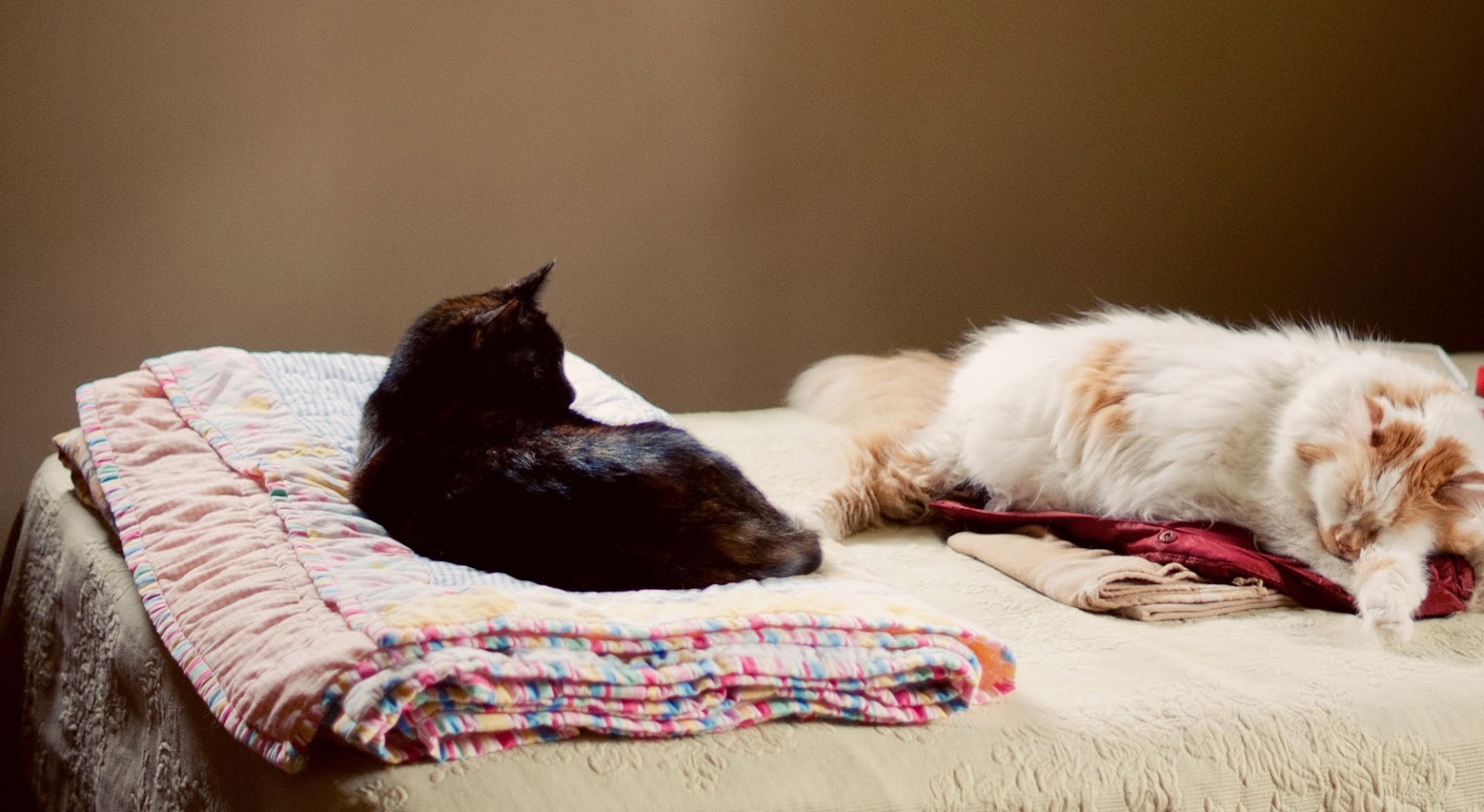 if they can sleep together, side by side.

Don't ask me why I still have this thing, made by me when I was very young. But I do, and it's actually still useful to me. 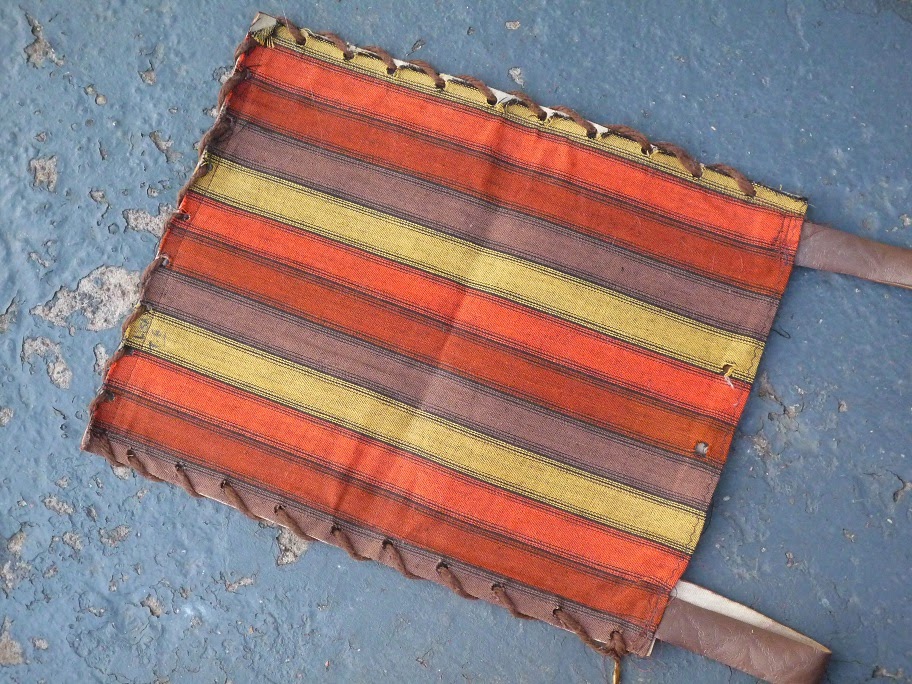 A sit-upon. Done in kindergarten? in Brownies? And I can hardly say I made it myself because the pieces were all pre-cut and the holes punched. My task was to whipstitch it together with the shoelace. I discovered it among some old stuff a couple of years ago; I just sat on it outside - to read a bit in the cool evening.  I like it! I like the "oldness" of it, and I like the fact that I can sort of actually remember making it.
Posted by Lisa at 7:33 PM 4 comments:

Lynda had wanted to see this - 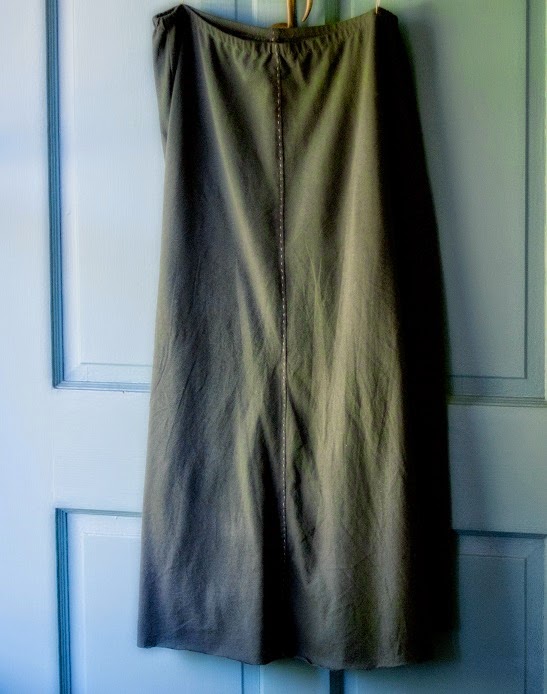 here it is, wrinkled!  It's extremely basic. Four panels, with the hand top stitching only on the front and back center seams. Elastic at the waist in a turn-over style casing, and no hem needed. Next time I'll probably do some sort of embellishment.
Posted by Lisa at 10:14 PM 6 comments:

Email ThisBlogThis!Share to TwitterShare to FacebookShare to Pinterest
Labels: fashion

For fish I often get cod - it isn't heavy, and you can get it ready very quickly. 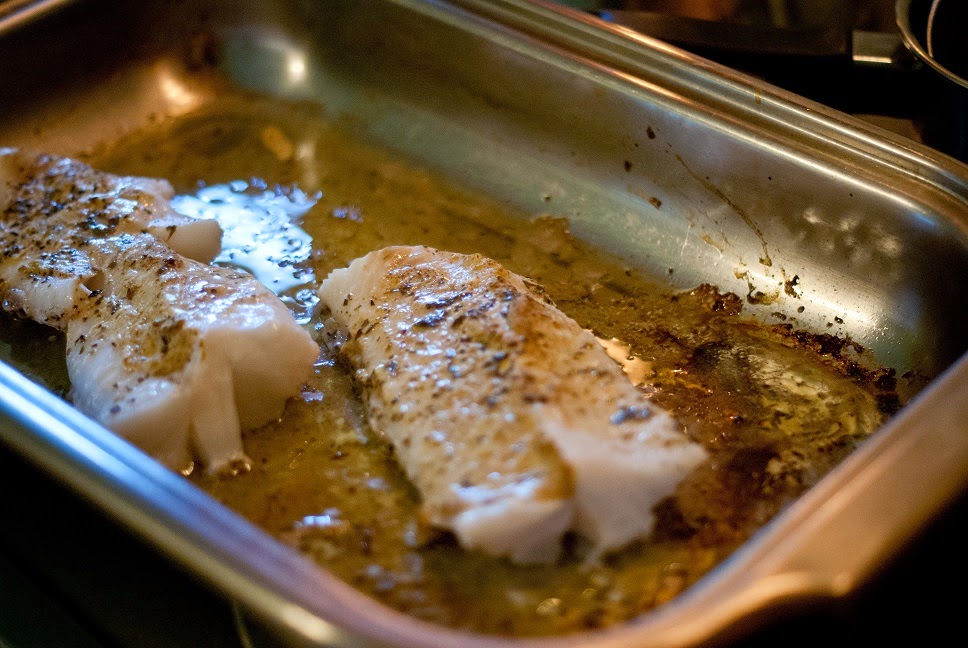 Salad dressing is perfect. Pour some on, and bake it twenty minutes or so at 375 and that's it. If I have a strongly flavored dressing that's enough, but the other day I had Italian, so first I spread mustard (Gulden's Spicy Brown, if you must know - totally forgot I had some dijon in the fridge) overall, then some Italian seasoning, and then plenty of dressing. Just right.
Posted by Lisa at 8:29 PM 2 comments:

I'm in my room with the windows open. It's a beautiful, warm and sunny-but-not-humid day. Perfect, with a breeze. And birds chirping, etc., outside.

I'm trying to paint a picture here - now you may add to it the sound of a bell ringing. Behind our house, on the street parallel to ours, is a Lutheran church and they have a bell in front near the road. It's ringing as I write this. 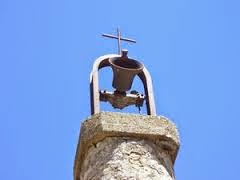 It's electric - this is an American suburb, not London - and they've had it for many years. How many times this Anglophile has listened with such enjoyment every day at noon and six (pm)! Years ago I counted the tolling; sixty four, I think it was. It broke more than once and there've been spaces where nothing was heard. I've called and written more than once to assure them someone was enjoying it - even sent money to help with expensive repairs.

Of course, in winter with everything shut up you don't hear the ringing and you forget about it. Especially since I don't think it's been working in recent years. But the other day there it was! I'm not sure it's ringing sixty four times any more. Whatever. I'm just thrilled to be hearing it again.
Posted by Lisa at 12:15 PM 8 comments:

open up your petals

Listen, my faithful children: open up your petals,
like roses planted near running waters;
send up the sweet odor of incense,
break forth in blossoms like the lily.

Send up the sweet odor of your hymn of praise;
bless the Lord for all he has done!

Proclaim the greatness of his name,
loudly sing his praises,
with music on the harp and all stringed instruments;
sing out with joy as you proclaim:
The works of God are all of them good. 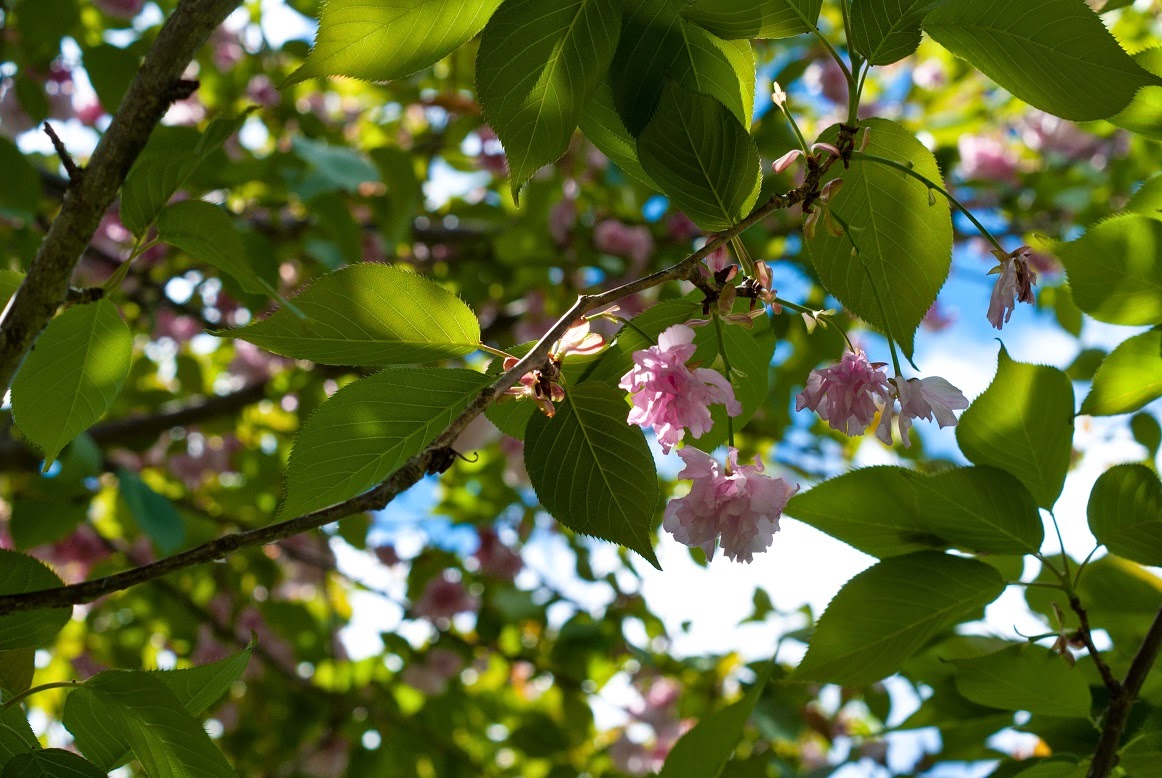