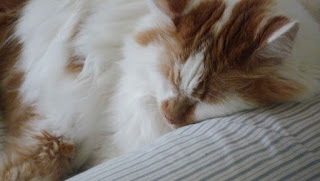 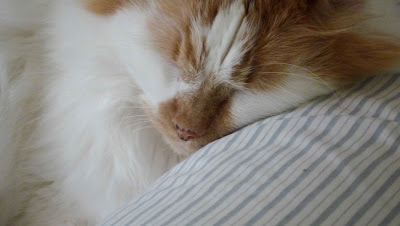 a cat by any other name

has the same little habits, doesn't she?

return of the ninja

Well, Cindy is back for another visit - two weeks this time. And that has to be the last time I call her Cindy, because she's been Tootsie at her new home for a while and I must get used to it.

a little sad I think, on top of the fridge

It's going to be like playing the shell game, shuffling cats and litter boxes. I'll keep you posted.

I made two Pinterest recipes for today's dinner. Chicken with Lemon, which was delicious, although I used "thin cut" but thicker-than-they-called-for chicken breasts, and not the tenders I was planning to buy; so I just cooked them a little longer - very lemony and good!

And I made zucchini cakes. The recipe called for a large zucchini - well, what is that, exactly? I had three small-to-medium ones, and an end of another. I grated the lot. After mixing everything together I could see it wouldn't hold, so I ended up adding two more eggs - perfect! 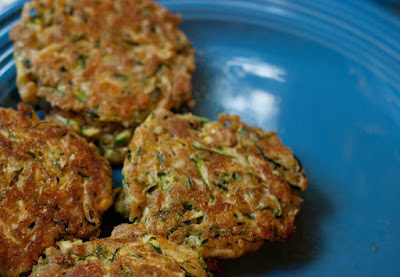 grate a large zucchini - i.e., whatever that means to you!
squeeze the liquid out of it, and mix it up with -
1 egg, a cup of panko (I used regular bread crumbs), a half cup of grated Parmesan (mine was more like shredded), one quarter teaspoon of paprika and one eighth teaspoon of nutmeg, a few shakes of pepper and half a teaspoon of salt.

When you mix it up, you'll probably see it needs something to keep it together, so add an egg or maybe two - you'll know when it's right.

Brown on medium heat four minutes per side, in some olive oil. Good hot, cold or in between.
Posted by Lisa at 8:25 PM 3 comments:

O God, who knowest us to be set in the midst of so many and great dangers, that by reason of the frailty of our nature we cannot always stand upright; Grant us such strength and protection, as may support us in all dangers, and carry us through all temptations, through Jesus Christ our Lord. 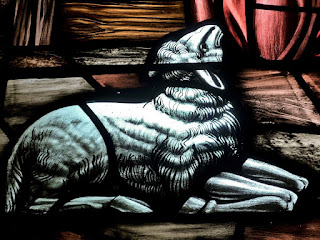 detail of the Nativity window at church
Posted by Lisa at 8:05 PM No comments:

A heavy box arrived in the mail; I wondered what the heck I had ordered and then forgot about. Put on the glasses, only to see Beth's name on the package. What did she send me?

Several jars of homemade jams: rhubarb, strawberry, grapefruit!  And a grapefruit marmalade! But you know which one I opened first? 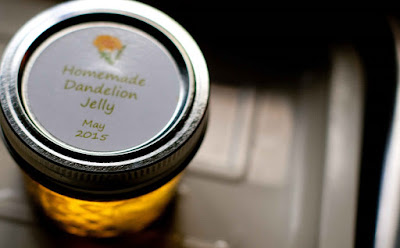 How cool is dandelion jelly!
Posted by Lisa at 9:16 PM 6 comments:

Beauty, strength, youth, are flowers but fading seen;
Duty, faith, love, are roots, and ever green.

I have to make an effort to remember that you can stuff vegetables with anything; it isn't something my mother was in the habit of, except the well-known stuffed peppers with the rice and ground beef mix and tomato sauce to cover.

I recently bought some inexpensive yellow peppers and just layered leftover rice, shredded zucchini, lots of basil and shredded parmesan in them after parcooking. Into the oven in a covered dish and - that was easy. 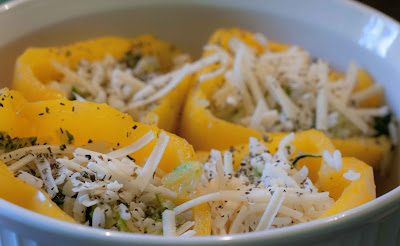 "To live fully, outwardly and inwardly, not to ignore external reality for the sake of the inner life, or the reverse - that's quite a task."

"no thought of burdens"

"...they both made her feel a burden when they fussed and worried...How wicked to think of burdens on this still and peaceful morning, with the gulls here. They were no burden to the air that supported them, nor the air to the fields to which it brought the sunshine and the rain. There should be no thought of burdens in the mysterious interweaving of one life with another." 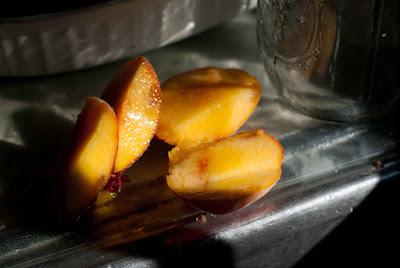 I really think that peaches are the closest thing we have here to a heavenly feast.
Posted by Lisa at 8:52 PM 2 comments:

and Dolly takes a Blue Train 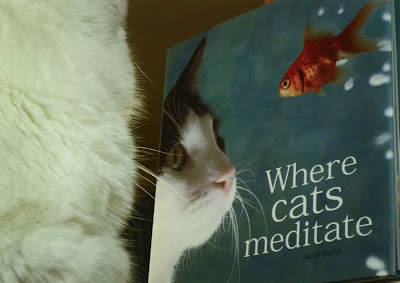 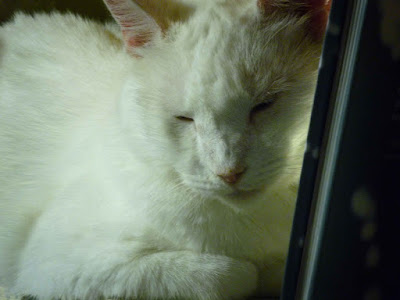 while listening to this.  The wonder of it!

In a Mellow Tone 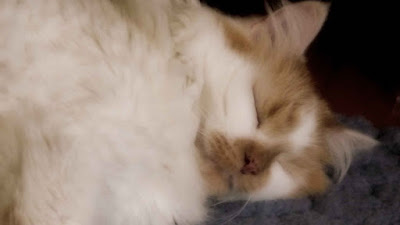 Henry, relaxing to some Count Basie
Posted by Lisa at 4:05 PM 5 comments:

service in the Kingdom of God

"I stand in the service of the Kingdom of God; therefore I do not build up my own kingdom, nor hold myself as the engineer of this kingdom. The gifts of God, his Kingdom, is anywhere a tear is dried, where a conflict is brought to a halt, an unacceptable social framework is altered and an acceptable one found, where faith overpowers doubt." 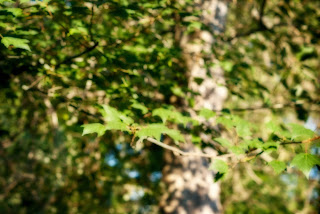 "There is an inward world into which they enter who come near to Christ, though to men in general they seem the same as before. They hold the same place as before in the world's society; their employments are the same, their ways, their comings in and goings out...But if they have drunk of Christ's cup and tasted the Bread of his Table in sincerity, it is not with them as in time past.

A change has come over them, unknown indeed to themselves, except in its effects, but they have a portion in destinies to which other men are strangers...They are soldiers in Christ's army; they fight against 'things that are seen'...

To their surprise, as time goes on, they find that their lot is changed. They find that in one shape or other adversity happens to them. ..they almost murmur; they have not yet mastered the great doctrine that endurance is their portion.

O simple soul, is it not the law of your being to endure since you came to Christ? Why come you but to endure? Why did you taste this heavenly feast but that it might work in you? Why did you kneel beneath his hand but that he might leave on you the print of his wounds? Why wonder then that one sorrow does not buy off the rest? Does one drop of rain absorb the second? Does the storm cease because it has begun? Understand your place in God's Kingdom, and rejoice, not complain, that in your day you have your lot with prophets and Apostles." 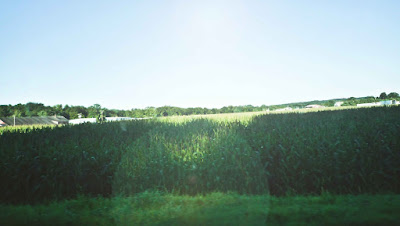 Jesus said to his disciples: Whoever wishes to come after me must deny himself, take up his cross, and follow me. For whoever wishes to save his life will lose it, but whoever loses his life for my sake will find it. What profit would there be for a man to gain the whole world but lose his soul? Or what can one give in exchange for his soul? For the Son of Man will come with his angels in his Father's glory, and then he will repay each according to his conduct. 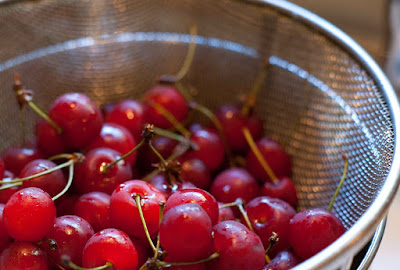 which I cooked up into a compote for my yogurt.
Posted by Lisa at 7:04 PM No comments:

Email ThisBlogThis!Share to TwitterShare to FacebookShare to Pinterest
Labels: fruit

I don't know what's come over me this summer, but when I had to bake a loaf of bread last week on a hot day, I didn't mind doing it. Over the past two summers I put my enjoyment of learning to bake bread on hold because I couldn't bear to think of using the oven. 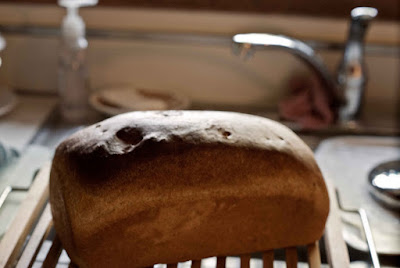 I also have not put on the air conditioner nearly as often as in previous years. Only when it's been 90 or above. I don't know what's up with me, but I'm glad of it.
Posted by Lisa at 5:34 PM No comments: 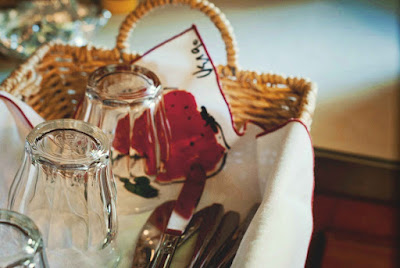 at home, just three of us. And Dolly, of course. 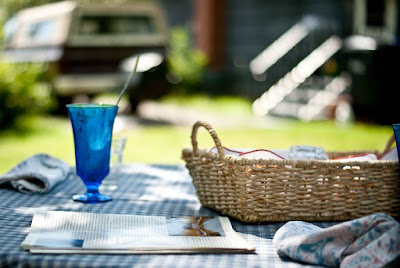 Who had her own chair, of course. And who, twice, when I had to go inside for something,  moved over to my chair while I was gone - for some reason. 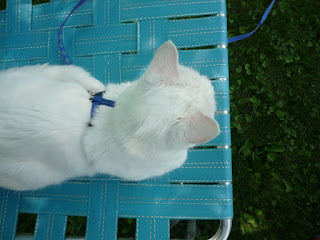 ...a seasonally sanctioned sojourn of slow joys.  When it's too hot to be anything but receptive and reflective. 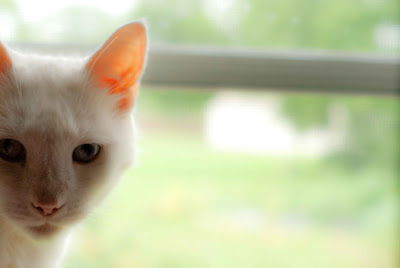