a new roof's on the way 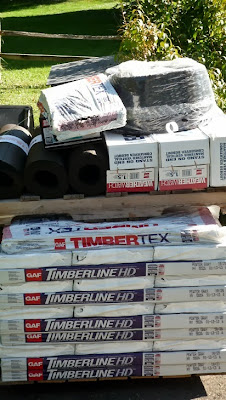 Email ThisBlogThis!Share to TwitterShare to FacebookShare to Pinterest
Labels: function 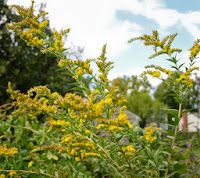 "It was a lovely afternoon -  such an afternoon as only September can produce when summer has stolen back for one more day of dream and glamour. Harvest fields drenched in sunshine lay all around them: the austere charm of northern firs made wonderful the ways over which they walked: goldenrod beribboned the fences and the sacrificial fires of willow-herb were kindled on all the burnt lands along the sequestered roads back among the hills." 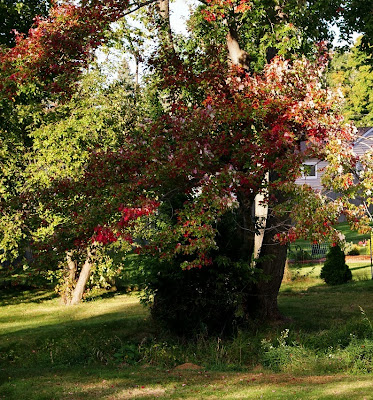 "May we walk profitably in this day's light, in the strength of the most high God, in the good pleasure of Christ, in the light of the Holy Spirit, in the peace of the Apostles, in the brightness of the saints, in the endurance of the martyrs, and in the purity of the virgins."

Today I finally made Anna's tea loaf. Loads of fruit, but no shortening of any kind. It calls for a small amount of orange marmalade, which I used, but you could just as easily use honey, I'm sure. 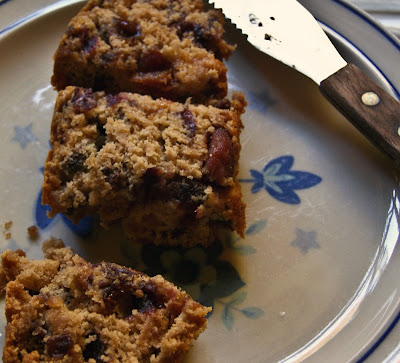 Since finally getting comfortable with dpn knitting recently, I am happily supplying myself with hand-warmers. These are the Simple Wristlets, made with super bulky yarn - so fast! 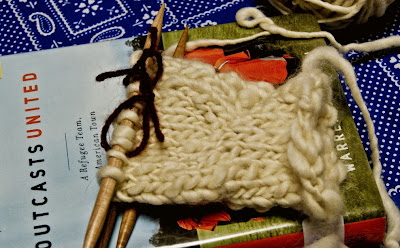 This is the recommended yarn, which is Malabrigo Gruesa, a terrific thick-and-thin wool which gives such an interesting look to these mitts - I don't even like them in plain old yarn. Gruesa has been discontinued but I managed to find some online. I bought two neutrals: a natural color and a charcoal. (but yesterday I ordered some more in lettuce green and a cool light blue!) Anyway, needless to say I love the stuff. I'm also finding that for double pointed knitting, I actually like wooden needles - my work seems secure on them, not likely to slip off too-slippery needles. For regular knitting, I've always preferred the old-fashioned aluminum or plastic I learned on (now I'm showing my age, I guess).

My book is Outcasts United, about a mostly-African refugee community in Georgia. It's about people from nations at war trying to make their way in a strange place. Also, a young Jordanian Smith College graduate who's good at soccer - she ends up in this town and coaches the young men from these families, giving them some focus and teaching them about teamwork. I like it so far.

Email ThisBlogThis!Share to TwitterShare to FacebookShare to Pinterest
Labels: fashion, fingerings, yarn along

wild asters in front of a clean window

Almost all the windows are done - 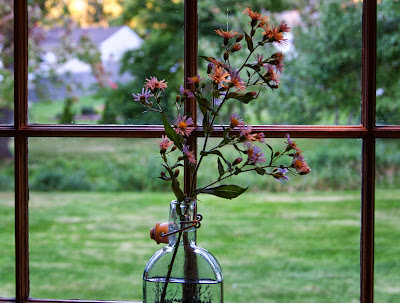 prayers for all in authority

"I ask that supplications, prayers, petitions, and thanksgivings be offered for everyone, for kings and for all in authority, that we may lead a quiet and tranquil life in all devotion and dignity."

I was very busy today, but still had time for some picturesque cloud-watching. 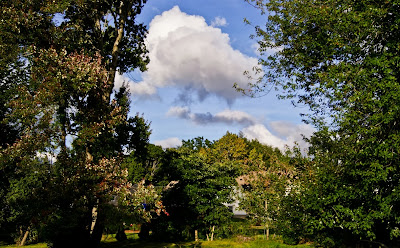 The herbs got dried this morning in the microwave - the whole place was fragrant, and it took no time at all.

I really wanted to use the oven method since that seems more natural, somehow. The instructions said two to four hours on a low temp, less than 180 F with the door cracked open. After twenty minutes Tuesday night I had a coughing spell and decided to give up the idea. I didn't want bronchitis from breathing in that wonderful but strong aroma for two hours. That was the dill weed; so I just left it on the trays in the oven till my next day off, which was today. 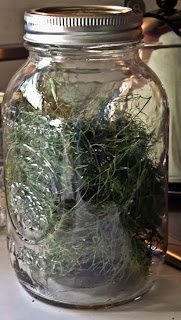 After a day and a half sitting in there it was all dry, so I just put it in this jar!

The microwave instructions said between two sheets of paper toweling, for one to three minutes. I did several batches of the basil that way, eventually settling on a one minute, ten second time for each batch. There was some dampness remaining, so I just left the stuff on a tray on a shelf; when I came back to it, it was dry. That is also in jars now.

The basil seems far less aromatic now that it's dry, and I'm sorry I didn't use this method from Organic Gardening magazine. It advocates freezing fresh herbs in olive oil or butter for the utmost flavor preservation - you can simply break off pieces of it as required! If I get my hands on any more basil I'm going to try it  Still, I'm beginning to feel like a squirrel who's storing nuts for the winter.
Posted by Lisa at 7:27 PM 1 comment:

They're talking about a bit of frost in the morning for the next couple of days. I thought I'd better pick the herbs.

Some Italian parsley went into the freezer. I'm going to attempt to dry the dill and basil in the microwave. Wish me luck. 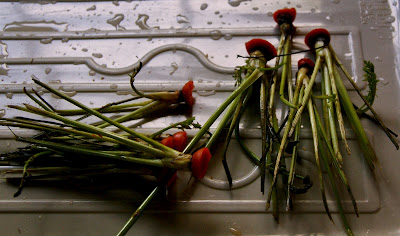 I so wanted to cook those lovely slim carrots with their tops, but alas! no skillet of mine could accomodate them.
Posted by Lisa at 7:38 PM 4 comments: 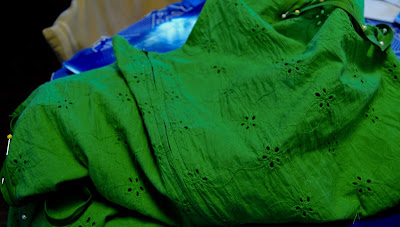 Trying to finish it before it's too cold to go sleeveless.
Posted by Lisa at 1:49 PM 2 comments: 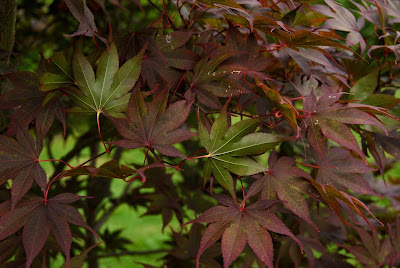 "Courage is fear that has said her prayers."

-   from Simple Abundance  by Sarah Ban Breathnach
Posted by Lisa at 8:51 PM 4 comments:

Email ThisBlogThis!Share to TwitterShare to FacebookShare to Pinterest
Labels: balance

still be my vision

Be thou my wisdom, and thou my true word;
I ever with thee and thou with me, Lord;
Thou my great Father, I thy true son;
Thou in me dwelling, and I with thee one.

Riches I heed not, nor man's empty praise,
Thou mine inheritance, now and always:
Thou and thou only, first in my heart,
High King of heaven, my treasure thou art.

High King of heaven, my victory won,
May I reach heaven's joys' O bright heaven's sun!
Heart of my own heart, whatever befall,
Still be my vision, O Ruler of all.

In the parking lot at the library there's a drop-off bin for clothing and shoes. After closing today, we noticed that someone had left a box of breakables next to the bin, and lo and behold! Some of us found treasure therein - things which would have unfortunately been thrown out, because the bin is only for clothes. 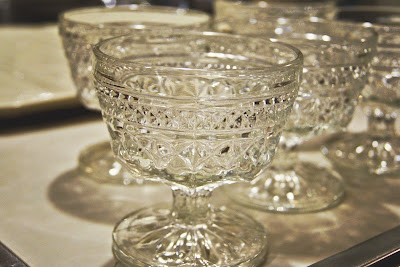 Five compote glasses which match some favorite stemware we've had for many years - this is a real treat! Who doesn't like their ice cream in a footed bowl?

This evening, with our apple tree outside still leaning heavily with its apples, I suddenly thought of Ralph Vaughan Williams' beautiful Linden Lea.  Do you know it? 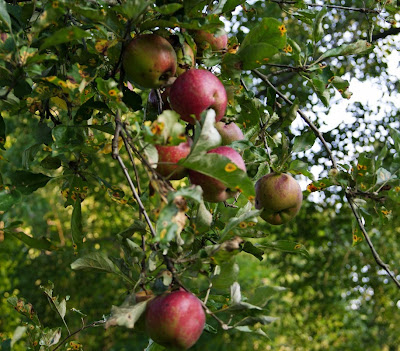 Such excitement! Many years ago my brother planted an apple tree on the narrow strip of land across the brook. I'm not sure why he chose that spot; it didn't get much sun and produced very few, gnarly things not fit to eat. 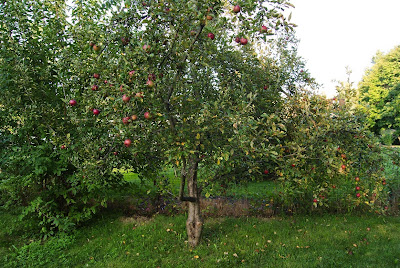 Monday while mowing the lawn he noticed a tree laden with apples! It was rainy that day, so he asked me to pick them after work this afternoon. I filled a basket, tbut then mosquitoes drove me indoors.

I guess the tree is tall enough to get sufficient sun now, and since the storms of two years ago there's less out there than there used to be. I can finish picking on Thursday. They are far from smooth-skinned and perfect, but I suppose most are all right. Some applesauce or apple butter is what I'm thinkin'. 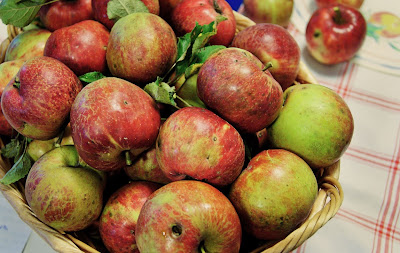 Dolly has a holiday

On the table this evening, listening to St. Louis Gal sung by Cecile McLorin Salvant.