I bought a calabaza squash at the supermarket; it was pretty big. After roasting it whole, it was well cooked inside after only an hour and a half. 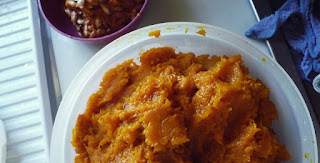 I then scooped up the flesh into a Very Large container, which it filled, and we had some with our roast the next day - it only needed some butter. There was a lot left.

So many seeds in that thing, I thought I should save them -

they should make a nice addition to granola. So then I found a pumpkin scone recipe. It barely made a dent. 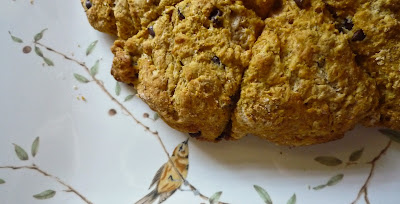 Really good! (But the orangey color isn't so appealing, is it?)  Still, it's really kind of fun to have the challenge of using up this squash. Next, probably a pumpkin bread.

a work in progress

"God calls us to freedom. But instead of being given to us instantaneously and in full measure, this freedom is built up progressively and patiently day by day, by being faithful to God's calls. .. As the story in Genesis of creation and the fall makes clear, sin is a rejection of life as God's child, bringing enslavement with it. Through pride, human beings refuse to accept life and happiness from the Father's hands, with confident and loving dependency, preferring to be the source of life for themselves. Suspicions, fears, worries, and inflamed desires are the result.  Looking for happiness not to God, but to ourselves, we feverishly seek it in things...

Openness to God's calls frees us from pride. It sweeps aside the attitude of self-sufficiency, the pretense that one is the sole master of one's life. In its place come dependency, availability to another, humility, and confident submission. .. This is the human tragedy: to seek to realize an image of happiness proposed to us by the surrounding culture, without ever finding true happiness. As Saint Paul says: What no eye has seen, nor ear heard, nor the heart of man conceived, what God has prepared for those who love him. Sorrow and renunciation, struggle and agony are part of the opening up to reality. This is a work in progress, never complete here on earth, that makes possible for us an ever more abundant and fulfilling life."

Rather lengthy, but interesting, I thought

I saw that a sprig of asters was growing inside the forsythia row near the back door. 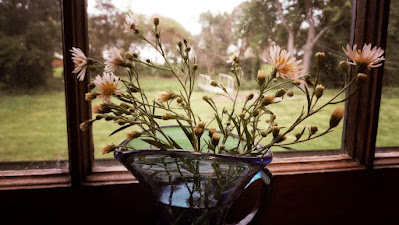 It contained a multitude of dainty blooms.

I don't recall if I already said this, but our big garden was a bust this summer - my brother didn't roto-till it as early as usual, and the very wet July killed several plants - most of them! I do think our preoccupation with Sweetie's illness was a factor.

The little garden beside the back door is giving us plenty of peppers, though. There are always white blossoms on the plants. 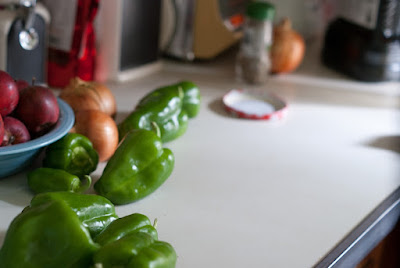 Something to be grateful for.

Reading my Bible last night, this intrigued me, a commentary on Luke, chapter 4 - which deals with the temptation of Jesus - by Bishop Robert Barron:

Whereas many (if not most) cultures both ancient and modern tend to apotheosize their political leaders, the Bible sees right through politics and politicians. One of the most important contributions of the Scriptures to contemporary politics, at least in the West, is this deep suspicion that power tends to corrupt. The institutionalization of this suspicion in complex systems of checks and balances is a healthy outgrowth of the biblical view.

To be sure, scripturally minded people should not allow their suspicion to give way to a complete cynicism regarding politics. Since God is powerful, power in itself cannot be construed as something evil, and indeed the Bible frequently states that legitimate political authority participates in God's own governance of the cosmos. But given the general human tendency toward self-absorption and violence - about which the Bible is remarkably clear-eyed - one should never put one's total trust in political systems, leaders, or programs. And one should be ever aware of the fact that human legal arrangements are under the judgment and authority of God."

"Power is extremely seductive. Many would gladly eschew material things or attention or fame in order to get it. Jesus' great answer in Matthew's account of this story is 'away with you, Satan'. To seek power is to serve Satan - it is stated that bluntly."

And this is in Magnificat today:

"Where jealousy and selfish ambition exist, there is the temptation to beset the just one with revilement and torture. This is what Jesus reveals to his disciples: he is to be handed over to men and they will kill him. The disciples' response is to squabble among themselves about who was the greatest. Where do the conflicts among you come from? From your passions that make war within, spurring us to kill and envy. Yet, for all our coveting, we do not find satisfaction. So Jesus puts his arms around a child to show us that he calls us to be peaceable, gentle, full of mercy - qualities we receive by asking for them."

the secret lives of ants

"The ways in which animals play had long been studied. Ornithologists had observed many types of bird play, such as when they hang upside down from tree branches and swing back and forth with apparent glee. Chimpanzees had been observed playing and chasing each other in ways that looked much like children playing tag. Even some insects had been observed to play. In 1929, August Forel, an influential ant researcher, wrote in his book The Social World of the Ants as Compared to Man: 'On fine, calm days when they are feeling no hunger or any other cause of anxiety, certain ants entertain themselves with sham fights, without doing each other any harm; but these games come to an end directly [if] they are scared. This is one of their most amusing habits.'"

We're having the most lovely weather now, finally. Those insects or tree frogs or whatever they are are singing outside in the night, in a constant hum. Crickets have been heard inside the library for the past three weeks; I had to catch one the other day and put him outside, but I did wait for nice weather to do it.

Dolly's dish has disappeared. It was last seen on Monday at lunch time. I fed her and Annie, then went out to lunch. When I came home, my brother said he couldn't find it anywhere. I have looked in every closet, cupboard, drawer and other ridiculous places. How do these things happen?

We were given a lovely homegrown cabbage! I made this recipe. Very nice. 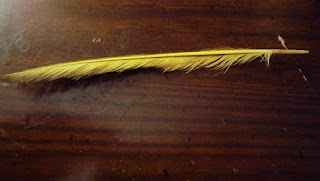 We found this yellow feather outside. I immediately thought of a goldfinch, but - they are small birds. This is five inches long. Goldfinches are about five and a half, with black wings. Here's a link to a good photo. I'll have to email this to the Audubon Society and see what they say. 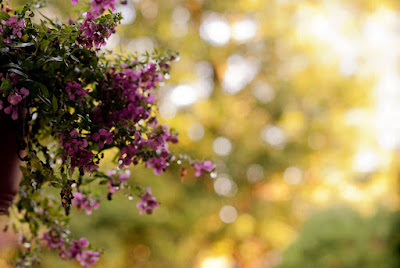 This plant is the best hanging plant I've ever had - it never stopped blooming all summer, with no encouragement from me, in the way of fertilizer, I mean. Just water. I tried adjusting the color here, but can't get it right; it's warmer toned than this - more of a dusky rose, and I'll try to take a better photo.

But I don't even know what it is!

"Since the time of Adam's fall, God has this invariable strategy...to draw good out of evil...The cowardice of Pilate, the cunning of Caiaphas, the intriguing, haughty spirit of the priestly leaders and the Scribes and Pharisees were the ladder along which Jesus went to his sacrifice. The tyranny of the Caesars during the first three centuries of the Church gave rise to the multitude of glorious martyrs. The heretics, who continued the persecutions, gave occasion to that group of Fathers and Doctors of the Church. Thus, in the succession of events, God always draws good out of evil.
What God does on a large scale in history, he does on a small scale in each soul."

"the potency of God's grace"

"The food we eat, our use of the world, the justice we bring, the art we make, these are the spaces in which the potency of God's grace shows plainly in the lives of those who love him." 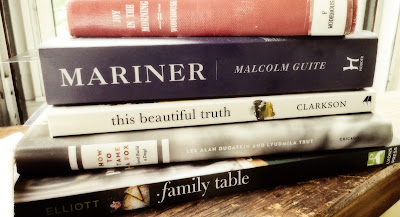 These are the books I've been tackling lately. Mariner will take a while because it's thick, and because when I have time to read, I may not always have the mental wherewithal to absorb something like that. That's why the P.G. Wodehouse is in the pile, and a humorous novel is part of the reading challenge, anyway; I didn't know what else would qualify as a "light comedic novel" - do you? The Family Table is one of two cookbooks by Shaye Elliott that I'm actually reading - I know some people read cookbooks, but I never have. Until now, and I'm really getting a lot out of it. This may also help me with the reading challenge, where I'm supposed to read from a genre I don't normally.
How to Tame a Fox is dry, but something I've been interested in for a while - the Russian experiment in domesticating foxes in Siberia for decades. Somebody just dropped off this book at the library, and I grabbed it. This Beautiful Truth is Sarah Clarkson's new book about her lifelong struggles with mental illness. She writes like a poet, and the whole story is beautiful and touching.

I made another zippered pouch. 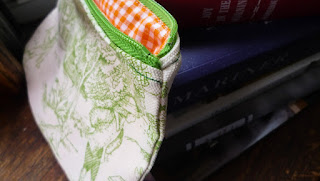 In my two favorite colors.

It's Labor Day. So I'll be Laboring over the chicken thighs roasted with Brussels sprouts, the cornbread, and the zucchini fritters. And the chocolate cake.

Those who love and those who labor
Follow in the way of Christ;

Lo, the bread of heaven is broken
In the sacrament of life.

- from Magnificat, September 2021, from a hymn by Geoffrey Dearmer 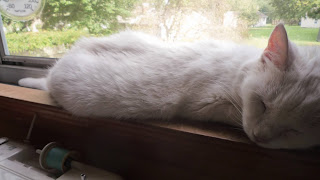