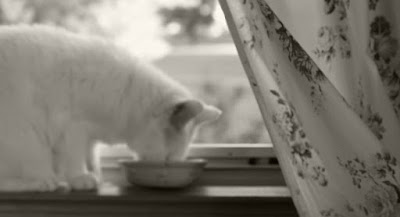 Fit for sitting in flower-covered windows. Or going to work in air-conditioning.
Posted by Lisa at 8:36 PM 3 comments: 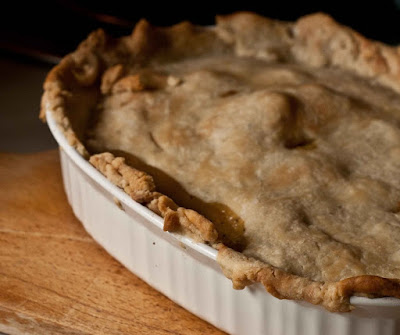 I had leftover chicken, and I had two leeks in the fridge too long; although they were fine, surprisingly, except for a little bit of dried green on the outside. It was a hot day, but what came to mind was chicken and leek pie. Not that I've ever made it before.

I know how to make a pot pie without a recipe - it's easy, so I could have figured out how to do this myself, but I decided to look online in case somebody had a new idea.  I found something - I did notice that the amount of flour didn't seem like much, went ahead anyway. It ended up with a sauce which was too thin for a nice pie. Now, what?

Potatoes!  I got the bag of potatoes and peeled and boiled them all. Cut them up and put most into the pie. It ended up quite good, but that detour added a large chunk of time to my dinner preps, and it was three hours after I began that we ended up eating. Lesson learned. 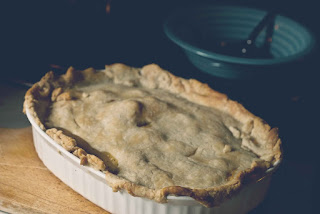 You care for the earth, give it water,
you fill it with riches.
Your river in heaven brims over
to provide its grain.

And thus you provide for the earth;
you drench its furrows,
you level it, soften it with showers,
you bless its growth.

The hills are girded with joy,
the meadows covered with flocks,
the valleys are decked with wheat.
They shout for joy, yes, they sing. 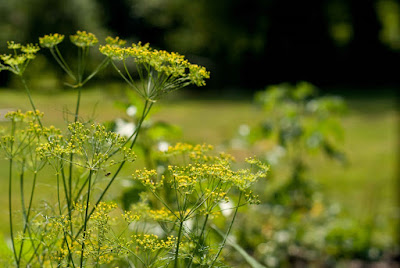 Ground that has absorbed the rain falling upon it repeatedly and brings forth crops useful to those for whom it is cultivated receives a blessing from God.

"As for the seed that fell on rich soil, they are the ones who, when they have heard the word, embrace it with a generous and good heart, and bear fruit through perseverance." 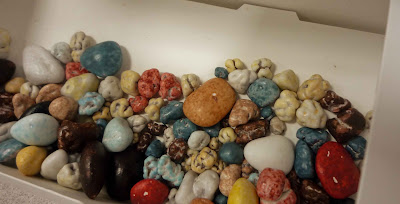 No, these are not beautiful pebbles scooped up from the shores of Bali Hai.  A co-worker brought them in to share - they're candy. And not just sugary tasting, which I would have left alone; but no, they're chocolate flavored. And, delicious.

We're all about dessert at the library.
Posted by Lisa at 8:32 PM 3 comments:

It struck me yet again the other day how helpful it is to have some things made up ahead of time.

Like pie crust dough. There was a little in the freezer for a while, and I decided I should take it out and use it. So, it was in the fridge when I got some fresh blueberries. Enough to make a bottom crust; I treated the top like a crisp. It took so little time!

I need to take a day each month, size up the situation, and make up batches of things like biscuits, pizza dough, pie crust dough, pancake mix; browned hamburg ready for chili, meatballs. That would be nice.
Posted by Lisa at 7:33 PM 5 comments: 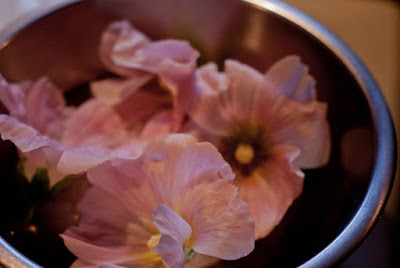 picked after a couple of stems came down in a hard rain.
Posted by Lisa at 11:21 AM 1 comment: 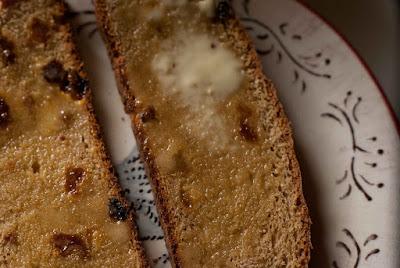 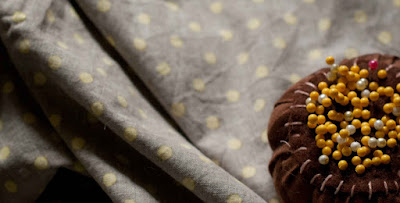 Email ThisBlogThis!Share to TwitterShare to FacebookShare to Pinterest
Labels: fabric 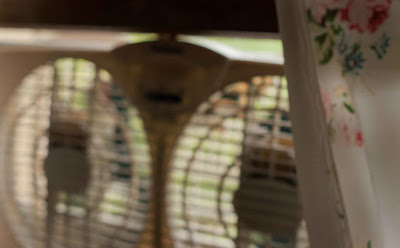 Ellie was a Canadian lady who followed my blog. I only knew it from the statistics which show me where people are coming from. She didn't comment, but for some reason I was on her blog list.

Ellie passed away yesterday. She'd been struggling against cancer for a while.


Eternal rest grant unto her, O Lord
Let perpetual light shine upon her
May she rest in peace. Amen.

May the angels lead you into paradise,
may the martyrs receive you at your coming and lead you to the holy city, Jerusalem.
May choirs of angels receive you
and with Lazarus, once a poor man,
may you have eternal rest. 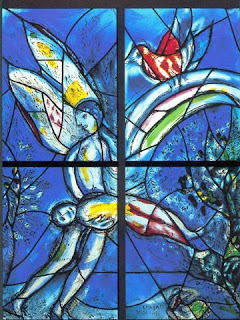 God has chosen us in Christ: let us give thanks and praise!

Today was the feast of St. Benedict, known as the father of Western monasticism.

He was the twin of St. Scholastica, who once, on a rare visit from her brother, prayed to God to prevent her brother from ending his visit to her. A big thunderstorm rose up and kept him with her a little longer.

Now Benedict had a sister named Scholastica, who had been consecrated to the Almighty Lord from the time of her childhood. She had the custom of visiting him once a year, and the man of God would come down to meet her at a place belonging to the monastery not far beyond the gate. One day she came, as was her custom, and her venerable brother came down to meet her with his disciples. They spent the whole day in the praise of God and in holy conversation. The darkness of night was already falling when they took their meal together. The hour grew later and later as they sat there at table carrying on their holy conversation. His sister, a holy monastic woman, then made a request: "I beg you. Do not leave me this night so that we may talk until morning more about the joys of heavenly life. But he responded, "What are you talking about, my sister? Under no circumstances can I stay outside my cell."

Now the heavens were so calm that no cloud appeared in the sky. When this holy monastic woman heard her brother's refusal, she folded her hands and put them upon the table. Leaning down, she put her head on her hands to make a prayer to God. When she raised her head from the table, there broke forth such powerful lightning and thunder and such a flood of rain that neither the venerable Benedict nor the brothers with him could set foot outside the door of the place where they were sitting. Indeed, while resting her head on her hands, this holy monastic woman had poured out a flood of tears on the table, and in this way she had attracted the rain to the calm skies. The flood followed her prayer in an instant. The connection between the prayer and the storm was such that her head rose from the table together with the thunder as if both the raising of her head and the falling of the rain were one and the same action.

When the man of God saw that he could not get back to the monastery because of the lightning and thunder and the great flood of rain, he was irritated and began to complain: "May God have mercy on you, my sister. Why have you done this?" And she replied to him: "See, I asked you, and you would not listen to me. So I asked my Lord, and he has listened to me. Now then, go, if you can. Leave me, and go back to the monastery." But unable to go outside, he stayed against his will in a place where he had been unwilling to stay on his own. So it happened that they spent the whole night in vigil, and during their holy conversation about the spiritual life they found fulfillment for themselves in their relationship with one another. 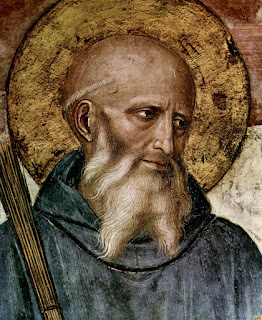 Ora et Labora is the motto of the Benedictines, and it means Pray and Work. A good motto!

Yesterday afternoon I did a load of whites, and when I went to the washer I found them all looking like they'd been smeared with dirt. I thought I'd done something wrong: had there been a clump of dirt there I'd missed? (how likely is that?); had I loosened grime when I cleaned the machine last week? But when I started to let water in to re-wash them, it came in brown and that's when I called the water company.

The fellow didn't know of any work being done in our area but maybe sediment got in the pipes and he told me to run water from the highest faucet for twenty minutes. (Isn't that an awful thing to have to do?) He also said they had stain remover if I wanted some; but I decided to try with what I had.

Enter Oxi-Clean. I had a small tub of it from years ago which I'd never even opened, but knew the time had come. I put in what I thought I should, and then doubled the amount. Everything came out white and clean!  A relief!

Email ThisBlogThis!Share to TwitterShare to FacebookShare to Pinterest
Labels: function 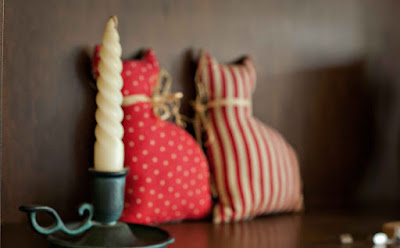 from the thrift store. And they're reversible - so it's really like four cats.
Posted by Lisa at 7:55 PM 4 comments:

hey, ho, the wind and the rain

I like umbrellas, in theory. But when you've got your handbag, and are carrying anything else at all, it's too much to handle an umbrella.

Still, the other day I happened to have my hands free in the rain.  I left the black one in the closet. 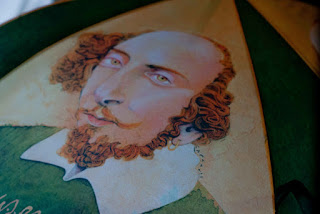 I have an umbrella with William Shakespeare's image on it. It's big, with a nice wooden handle. A silly purchase, I suppose - I got it a long time ago. 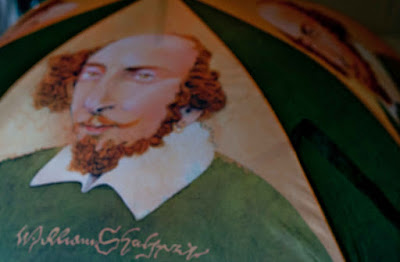 But it has his autograph - how could I resist it?
Posted by Lisa at 8:41 PM 4 comments:

Email ThisBlogThis!Share to TwitterShare to FacebookShare to Pinterest
Labels: frivolity

I keep my thread in a basket; a drawer, actually. But there are a lot of very small spools which are better kept together, so they've been in a bag and the whole thing just gets stuffed into this drawer, which barely closes because it's too full. Anyway, enter Pinterest, and an idea for putting these little spools in a jar! And I had just the jar for this - 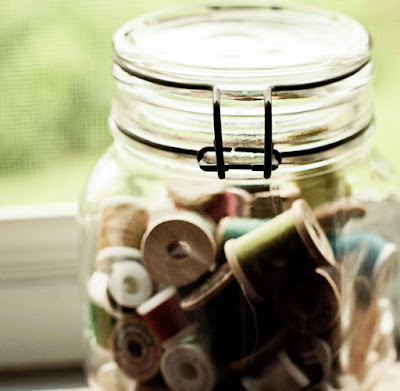 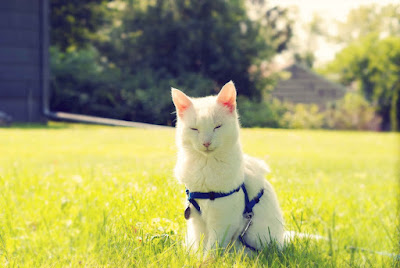 Wishing very hard that everyone had a nice Fourth of July!
Posted by Lisa at 9:23 PM 4 comments:

"...success in life is not how well we execute Plan A; it's how smoothly we cope with Plan B."