I've been reading "Affairs at Thrush Green" and am enjoying it more than I expected to.

"One blue and white day towards the end of March, the rector made his way towards a remote cottage near the River Pleshey."

One blue and white day - something about that simple phrase is so appealing. Another book I started reading is "Quiet: the Power of Introverts in a World that Can't Stop Talking".  A library patron recommended it. The author makes the point that extrovert behavior is highlighted and applauded in our society as something to attain to, disregarding the natural inclinations of the individual. I hadn't thought of it like that.

"A moorhen fled squawking as the rector passed by, its feet making a sequinned track on the surface of the stream. A water vole crossed nearby leaving an arrow-shaped wake as it forged toward the safety of the bank.

The rector had an observant eye for such details. They added to the joy of his walk which he had undertaken for just such refreshment. He had felt the need for a little solitude, for time to relish the lovely natural scenes about him, free from the intrusion of fellow humans.

He noted the crinkled bark of the willow trunks, the criss-cross pattern softened by grey-green lichen. He smelt the pungency of water-mint growing in the muddy shallows at the brink of the Pleshey. He heard the plop of small animals making for water cover as he approached, and he saw the great galleons of white clouds sailing superbly across the blue sky above the water meadows, and felt the wind on his face.

He revelled in his senses which brought to him such richness, and thanked God that he still had health and strength to enjoy all five."

- from Affairs at Thrush Green, by Miss Read

I would like to remember the comparison of puffy clouds to "great galleons", next time I see a blue and white day.

Northern Flicker at the feeder

This is for Gretchen, who says the Northern Flickers who visit her in California don't go to her bird feeders. They do here! 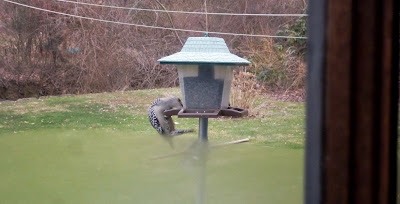 They come often, but the only shot I can get is this one, with him bent like a C, trying to get food. They fly over, eat a bit and then they're gone, for a minute until they come back. 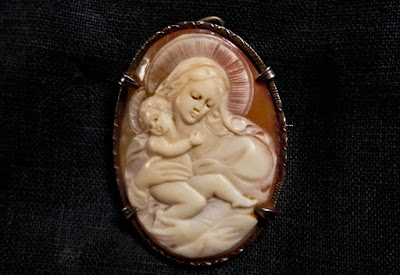 This belonged to my aunt, who died years ago. But she was a favorite, and I asked my cousin a few years back if there was anything of hers I could have. She gave me this. It's from Italy; I take it out at Christmas.
Posted by Lisa at 9:34 PM 4 comments:

Today in the church calendar we celebrate the baptism of Christ. This morning, Father said it's the last day we can wish anybody "Merry Christmas".

On Christmas Day to My Heart

To Day:
Hark! Heaven sings!
Stretch, tune my Heart
(For hearts have strings
May bear their part.)
And though thy Lute were bruis'd i' th' fall,
Bruis'd hearts may reach an humble Partoral.

To Day
Shepheards rejoyce
And Angells do
No more thy voice
Can reach that too:
Bring then at least thy pipe along
And mingle Consort with the Angells song.

To Day
A shed that's thatch'd
(Yet straws can sing)
Holds God; God's match'd
With beasts; Beasts bring
Their song their way; For shame then raise
Thy notes; Lambs bleat and Oxen bellow Praise.

To Day
God honour'd Man
Not Angells: Yet
They sing; And can
Rais'd Man forget?
Praise is our debt to-day, nor shall
Angells (Man's not so poor) discharge it all.

To Day
Then screwe thee high
My Heart up to
The Angells key;
Sing Glory; Do;
What if thy stringes all crack and flye?
On such a Ground, Musick 'twill be to dy. 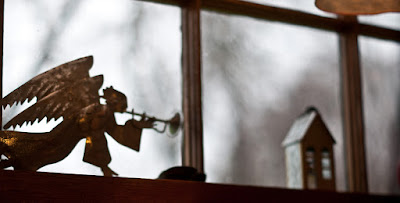 Well, it's Epiphany already. The Wise Men have arrived at our house.

Lord! Grant some Light to us, that we
May with them find the way to thee.
Behold what mists eclipse the day:
How dark it is! shed down one Ray
To guide us out of this sad night,
And say once more, Let there be Light.

That is from a poem by Henry Vaughan, from a book of Christmas poems which I'm really liking this season.

Our mail has been messed up, and two of my subscriptions are late. It was reported in the news that the postal service was backed up due to more Christmas mail than usual. But, will it ever come? Or is it lost somewhere, forever? Meanwhile, my issue of British Country Living - the February issue - from England - came yesterday! I definitely am getting better service from them directly than I ever did from Amazon.

Yesterday, the library custodian told me that the fellow who runs the hardware store told him that my brother had been there last week. I told this story to my brother later on. Doesn't it sound like something that would happen in a very small town, maybe eighty years ago? Our town is small, but those days are gone; still, I guess not entirely.

One of the oxen said
"I know him, he is me - a beast
Of burden, used, abused,
Excluded from the feast -
A toiler, one by whom
No task will be refused:
I wish him strength, I give him room."

One of the shepherds said
"I know him, he is me - a man
Who wakes when others sleep,
Whose watchful eyes will scan
The drifted snow at night
Alert for the lost sheep:
I give this lamb, I wish him sight."

One of the wise men said
"I know him, he is me - a king
On wisdom's pilgrimage,
One Plato claimed would bring
The world back to its old
Unclouded golden age:
I wish him truth: I give him gold."

Mary his mother said
"I know his heart's need, it is mine -
The chosen child who lives
Lost in his Lord's design,
The self and symbol of
The selfless life he gives:
I give him life, I wish him love."