I tend to think of Lent as a desert place. So, it was helpful to see this as today's meditation in Magnificat:

"It is in the desert, then, that salvation is first restored to humankind - there where are no rich foods, where there are no pleasures....In paradise the devil contends with Adam, and in the desert the devil struggles with Christ....The very body of the Christian is in a sense a desert when it is not filled with food and cheered with drink...Then Christ the Lord inhabits the desert of our body - when he has found that our land is desolate because of hunger and parched because of thirst."

And in his homily this morning, Father also spoke of the desert, saying it's "where you can take no joy in anything." And "where you feel the ground is collapsing under our feet."  The desert can be a scary place.

It began snowing yesterday, around twelve noon, right when they said it would. But they also said it would stop at seven tonight. It's eight thirty-nine. Still snowing.

It's very gentle, a quiet, gentle snowfall. And beautiful - I kept looking outside, at the same view as always, which I never tire of. 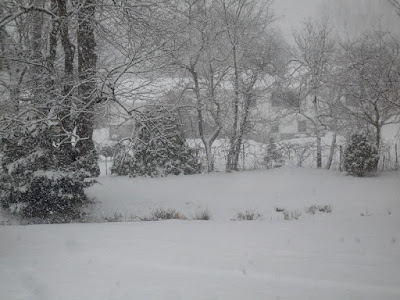 Looks like a lot, doesn't it? But there was already some on the ground. A day and a half of almost constant snowing, and all we got was three inches, maybe four. 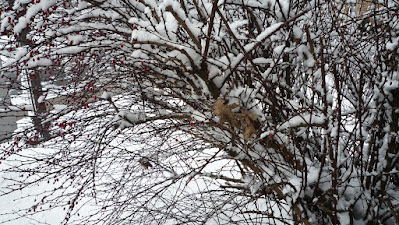 This was on The Daily Poem podcast the other day -

The Snow Arrives After Long Silence

The snow arrives after long silence
from it's high home where nothing leaves
tracks or strains or keeps time.
The sky it fell from, pale as oatmeal,
bears up like sheep before shearing.

The cat at my window watches
amazed. So many feathers and no bird!
All day the snow sets its table
with clean linen, putting its house
in order. The hungry deer walk

on the risen loaves of snow.
You can follow the broken hearts
their hooves punch in its crust.
Night after night the big plows rumble
and bale it like dirty laundry.

and haul it to the Hudson.
Now I scan the sky for snow,
and the cool cheek it offers me,
and its body, thinned into petals,
and the still caves where it sleeps. 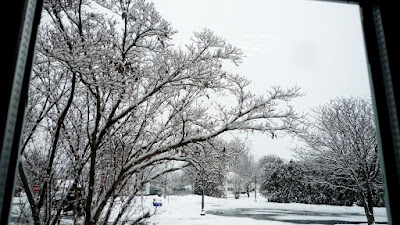 The ashes this morning didn't consist of a big black cross on my forehead; there's apparently another way of dispensing them - just a sprinkle on the head. And that's what we got this morning.

"Jesus is not the Lord of comfort, security and ease. Following Jesus demands a good dose of courage."

Here's something by Sarah Clarkson - she didn't get any ashes today, but she wrote a wonderful poem.

"The world offers you comfort. But you were not made for comfort. You were made for greatness." 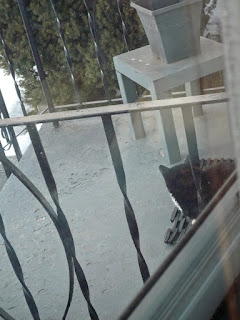 Sneakers, one of Diane's cats, on our front stoop, reminding us of Mr. Kibble
Posted by Lisa at 8:06 PM 2 comments:

Dolly is doing much better, no more blood, no more incontinence, no more peeing on the floor. She's using the box and is back to eating like a horse. We were watching Sense and Sensibility together for a while this evening - the dear girl! 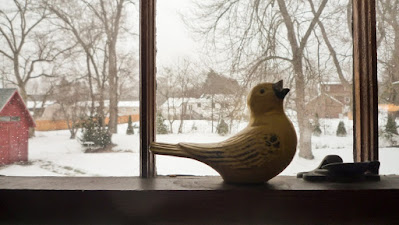 It's almost Lent. And that means spring is coming.
Posted by Lisa at 8:52 PM 5 comments:

I hope everybody had a lovely Valentine's Day. 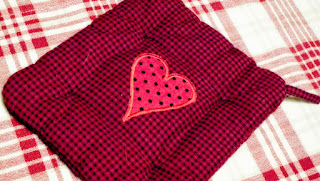 There is a very timely piece on Aleteia on why St. Valentine is invoked during a plague.
Posted by Lisa at 8:13 PM 2 comments:

trials and tribulations for Dolly

Yesterday my brother came home for lunch to find drops of blood here and there around the house; the cats were all in the living room, in their separate places. It was rather alarming, but he figured it was from Sweetie; she sometimes gets bloody saliva from - we suppose - accidentally biting the growth in her mouth.

But, no - this morning I saw that it was Dolly who was dripping blood. We found a veterinary hospital who had time to see her. She's got a UTI - not, thank God, a bowel obstruction or worse as my wild imagination was suggesting. Poor old lady! They said that diabetes and urinary tract infections go hand in hand.

Speaking of diabetes, her three month checkup showed high blood glucose levels, so the drop was only temporary - we are now giving her insulin shots twice a day. It's still in the trial stage, trying to find the right amount for her; I never thought I'd be giving shots to anybody. 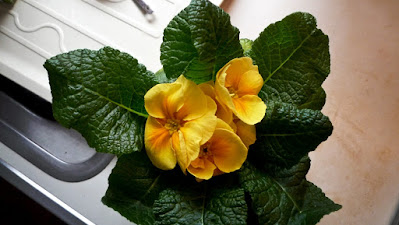 The primroses were three for six dollars at the supermarket; I bought a pink one, a white one and a yellow one. Then I had to put away the wintery decorations - it was an absurd juxtaposition.

This morning I noticed that the clock on my little short-wave radio was off. I scrambled through several drawers, looking for AA batteries but didn't find any. I use that radio for my alarm clock. But then I thought I'd try to reset the time - it worked! I'll bet Sweetie probably stepped on it. 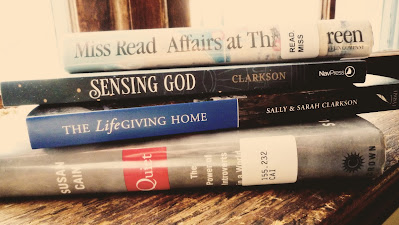 So I don't have to worry about getting up on time in the morning. 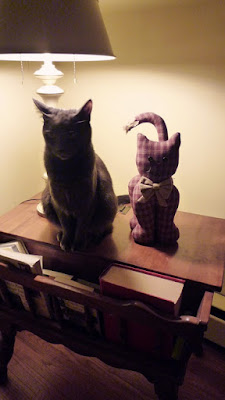 Another day of snow! We thought it would start early, but it hadn't when we got to church - I wore my boots anyway. And after, when we opened the doors, snow was falling briskly and was fast covering everything. It's always exciting! I was happy to hear a young father say, "all right!" when he saw it, like a big kid himself. 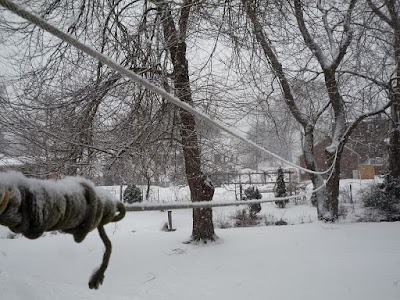 In no time, everything was looking beautiful. Birds were flying to and from the feeder seemingly in shifts, different ones each time. 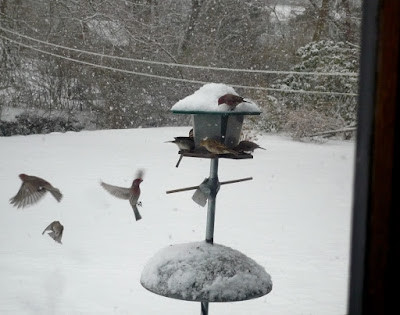 It snowed all day, piling up. 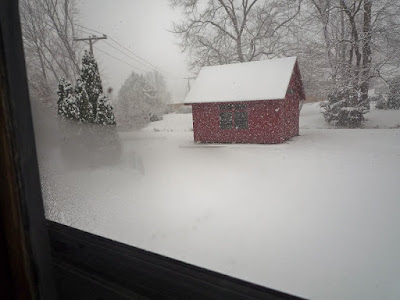 and then when it was dusk, I got one more picture. 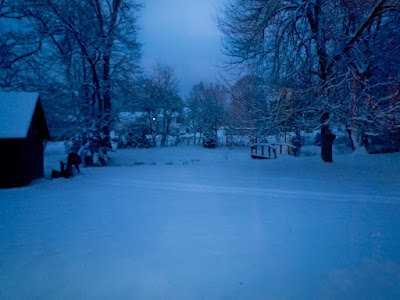 you can see the light reflected on the window, and it isn't very clear,
but it was so beautiful.

"... the delight and glory of a beautiful melody; the enchantment of light as it shimmers through stained glass; the restorative kindness of a gentle embrace; the sudden, arresting joy of a fragrant aroma; the nourishing warmth of a good meal... This divine expressivity presses out in every corner of our lives."
- from Sensing God, by Joel Clarkson

"Somehow one was always looking ahead, planning the next move, trying to cut down time. And in all this bustle the present was lost. The daisy opened, closed and died. The chaffinch threaded the last bit of moss into its nest before sitting. The sun reached the point in the heavens when the weathercock turned to gold. And all these wonders passed unremarked, because the clock on the mantelpiece gave stern reminder... Charles Henstock was the first to honour his duties towards God and his neighbors. But what a bonus it was...to have these precious moments of just being, of becoming aware of all the other lives impinging on one's own, and of having time to give thanks for such revelation."