Once or twice I've mentioned a wise old man. I learned much from him, spiritually, I mean. 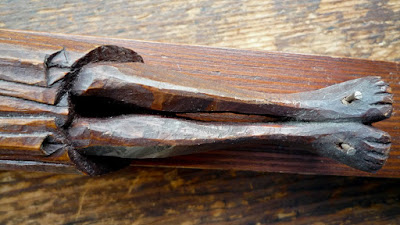 He was acquainted with a hermit - yes, a real hermit, the Catholic variety. He passed away in March of this year.

I knew him a little. He lived in this town for a little while twenty or so years ago, and would say Mass at the old man's house, and I was able to go sometimes. Those were special days for me. The hermit, Father P., was good with wood and there was a crucifix he'd carved at the old man's house. They both told me that they wanted me to have it, when the time came. 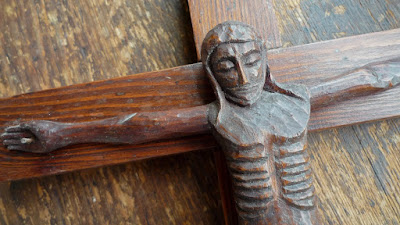 The hermit ended up in Belgium; the old man didn't forget. When my brother and I visited him a year or so ago, he had my brother write my name on the back of it.

Well, the time came, and the old man died two months ago, at the age of 101. And now I have the crucifix on my wall.

It's large-ish, but surprisingly lightweight. I have no idea what wood Fr. P. used. 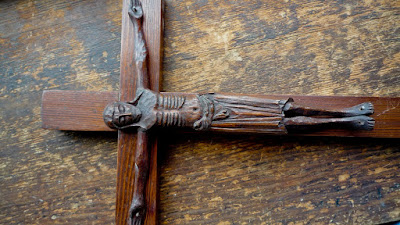 I am honored to have this.  Eternal rest grant unto them, O Lord. Let perpetual light shine upon them. May they rest in peace. Amen.
Posted by Lisa at 11:31 PM