I started to knit a poncho, so I can join Ginny's yarnalong this month. I was never keen on ponchos, until I bought one from Lands End overstocks - wool rich, for fifteen dollars. I figured it might come in handy. It did, but after washing it gently in the washer every spring for a few years it felted enough so that it's too constricting now. And I miss having a poncho. 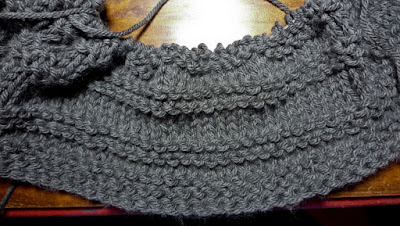 The pattern is on Ravelry, it's a Coats and Clark design by Marilyn Coleman, very poorly photographed. The yarn is Cascade 220 aran superwash. I wanted it warm, but washable. It isn't cheap to knit a poncho if you want some substance to it, so this pattern and this yarn seemed the best course. Let's hope. 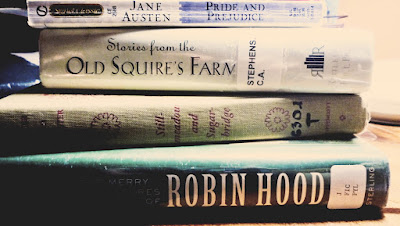 I read too many things at once. But I'm trying to focus on the bottom two, which are interlibrary loans. The scenery descriptions in Robin Hood evoke everybody's ideal of merry old England, which is just delightful; Stillmeadow and Sugarbridge consists of letters written between Gladys Taber and Barbara Shenton. These women were so articulate, their letters so eloquently descriptive of their normal everyday lives, I feel like a dope because I know I couldn't do that. Of course, I don't try very hard, either; I'm a poor correspondent. But it makes you feel like you should try.

Dear Barbara,
So far as I know, none of our dogs has ever caught a frog. But I can hear the popping sounds all day as the poor things leap back into the water as the Irish [setter] lunges at them. When I go down to swim, one very green, very wise frog sits by the stone steps and waits for me, and he knows nobody is going to disturb him. He blinks a watery eye and just watches. He is the first frog I have ever known personally and we have nice little visits. ...

Dear Gladys,
This morning as we sat at breakfast on the terrace, chairs pleasantly damp and cool from last night's rain, our own mockingbird singing incidental music and the trumpet vine nodding to us in a sunburst of bloom from the top of the gum tree, we cast a contemplative and, in the direction of Stillmeadow, a nostalgic glance back over our finally-realized trip.

I think I would feel better if I knew they had used the typewriter, at least.