We're in the dog days of summer now, the days when the air conditioning (thank God for it!) is running even at night. But today there was cause for rejoicing because we had blessed rain - and some yesterday, too. It's been very, very dry. And have you ever noticed the garden always seems to prefer rain water to tap water?

It was so cool and pleasant in the living room today that Dolly actually wanted to lay on some warm laundry.

Good thing my brother isn't bothered by the cat hair on his sheets.

I've been working on a Dottie Angel frock  - or rather, I realized I started one a month ago, and somehow haven't felt much like sewing lately; but that's ridiculous - I want to get it done.  I made one a while back and it ended up being huge, and the fabric was stiff and cheap and it was awful - I rolled it up and stashed it somewhere I don't remember. I have higher hopes for this one. It's a very cute design and would be a useful garment, I think. Today I'm working on finishing the neck.


Have you ever noticed that if there are any flip flops hanging around, a cat is sure to lay on them? 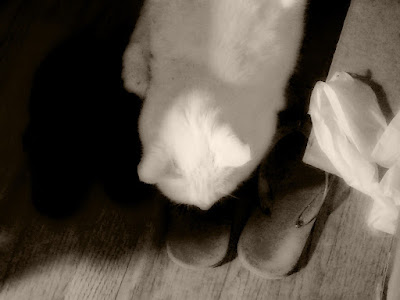 This is not my imagination. I have a picture of Henry on some, and am sure I'll soon have one of Sweetie.


I'm reading another book on Winston Churchill. The first one, Churchill's Trial, I'd read a review of, and had to buy it; it's basically a character study of the man during his experiences with the two world wars. Now I've got a library book by Boris Johnson, recent mayor of London, The Churchill Factor: How One Man Made History. He's a good writer and not afraid of giving strong opinions, which makes it very interesting to me. It seems that Churchill was the sole voice against appeasement with Hitler - what a terrifying thing to imagine how things could have ended up!

In between the rain, sunshine and occasional thunder there was a very brief sun shower, which I caught (quite poorly!) in a little video.


It rains and it pours.
I've got too many chores.
There's the cooking and cleaning to do.
I'd rather be out on a wet, green hill,
Laughing and dancing with you. 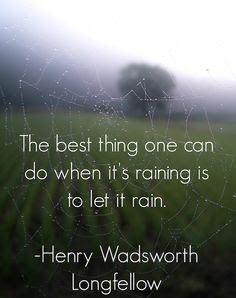 found on the internet