the vinegar that never happened 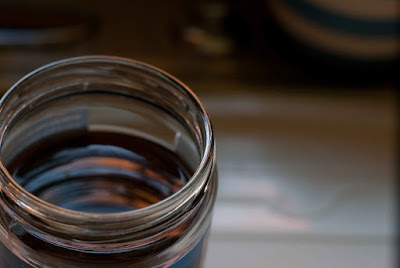 That's wine in the jar. It has to be close to a year ago when I thought I'd just let a bottle of red wine go sour, thereby making red wine vinegar, right?  I started by leaving the top off when I thought of it. That didn't do anything, so then I just left it off completely. For weeks and weeks. Bugs may have fallen in; I didn't check - the bottle was painted black. But it still smelled like wine after all that time. I got an idea that maybe sunlight would make it happen, so I poured it into a clear jar. That was quite a while ago and it still smells like wine. Today I found this which seems to say it's not that simple.  So, I give up. I could swear that during my youth, there was once some wine in our house that went bad.

Maybe they're making it differently now; kind of like the ultra-pasteurized cream that two months after you bought it is still (miraculously) good.
Posted by Lisa at 8:44 PM