a lemon cake for Millie

My elderly neighbor had a birthday coming up, and she asked me if I'd make her one of those little quick breads with the lemon glaze poured over while they're still warm.  I said, "sure!", but when I went to get my recipe, it wasn't there.

I'd never actually made the recipe, but had tasted it, and then asked the baker if I could have it. This was at least twenty years ago. It was delicious, but I suppose I must have cleaned out my recipe box from things I'd never made.
So, I looked through a few cookbooks, and found two hopefuls - one for the cake, one for the lemon sauce for the top.

They were in 1000 Great Recipes, by Martha Day. It's an English cookbook - you can tell those by the "funny" temperatures and measurements - but it also has the American equivalents; a very sensible arrangement!
I made the Lemon and Walnut Tea Bread. Left out the walnuts, and put less lemon in, because I think these cakes are supposed to get their lemonyness from the icings. The sauce was from another cake recipe on a different page - it seemed good to me, so I went with it!

When I took it out of the oven (you're looking for another disaster story here, aren't you?  Nope.), I heated up the sugar, lemon and water, then poured it over the cake, after poking holes all over with a toothpick. 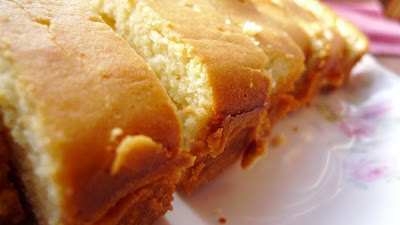 This recipe is a keeper, let me tell you. Sponge cake is what came to mind when I tasted it. It only has two eggs, but they were separated, with whipped-up whites folded in at the end, and I guess that's what does it.  I can picture this cake - with or without lemon flavoring - in two eight-inch layers, with jam between, just like Victoria Sponge!
As for the lemon sauce, it made everything very tasty and lemony. But it wasn't the usual sugary, lemony icing you find on these cakes which gives almost a sugary crust. I'll have to look for the proper thing online.
But it was good, and Millie was glad to have it. 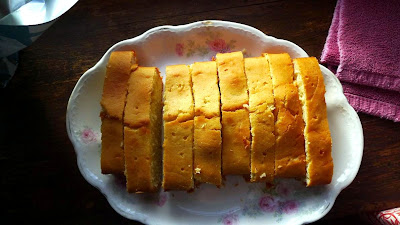