memories of a tree 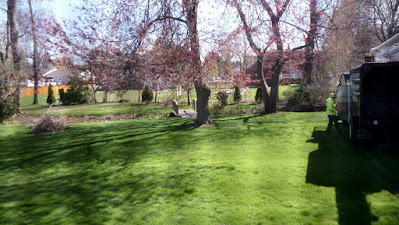 The maple right there, right before you get to the bridge - well, take a good look. It isn't there now.

The infamous October snowstorm from nine and a half years ago caused this dear tree to lean toward the house, and another one on the side near the fence had damaged limbs up high. We thought it would be safer to take them down. 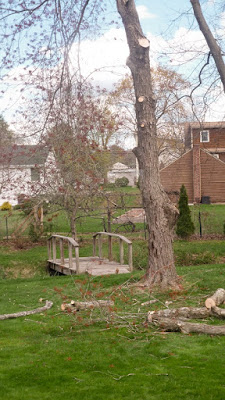 A co-worker had a tree land on her house during a very windy night. Now, a year and a half later, they are still living in a condo, waiting for their home to be finished - the delays due to COVID, for the most part. 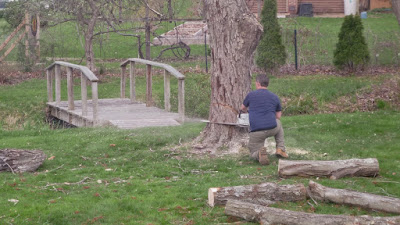 This is the tree Dolly and I sit under every summer, with our quilt and music and books and magazines - well, my stuff, but she enjoys the quilt and the music. No more, Dolly.

There is a tree out there the clothesline is attached to, so we do have some backyard shade. And we're wanting to put another two or three trees back there as soon as the stumps get removed. Maybe another ornamental cherry, Japanese maple - nothing too tall.

It was quite something to watch these fellows; they were here seven or eight hours, and it's such hard work. Worth the amount we paid them. And it was arranged that they'd drive the logs up the road to a neighbor who can use them, so that was very tidy.

At the end as they were leaving, a sun shower arrived. Immediately, I started looking for the rainbow. 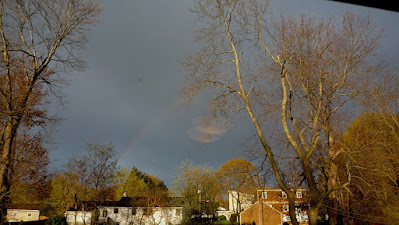 It was faint, though not as faint as it looks here. But it was heartening to see a rainbow, and now there's nothing to block the view.