The grass is entirely green now, and all it takes is a warm day. It had begun to turn a couple of weeks back with those two days of warmth, and then stopped the greening when it cooled down. This week was enough to finish it - it makes such a difference, to see green grass all around! And the maples have their red buds all over them. 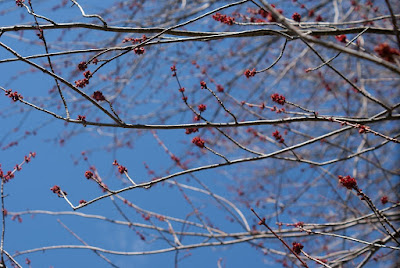 And Easter is coming.

I heard a question on the radio the other day - they wanted to know if anyone could guess which president said this:  "The nine most terrifying words in the English language are, 'I'm from the government and I'm here to help.'"  I said to myself, that sounds like something Reagan would say, and I was right. Good old Ronnie. Life was simpler then.

I thought I would've had some seeds started inside by now, but you can only do so many things in one day, and Sweetie's condition has been occupying my mind a lot this week; she took a turn for the worse over last weekend and can't seem to eat by herself anymore. So, we fish her out of whatever corner she's hiding herself and squirt some thinned-out soft food in her mouth a few times a day. She can still drink from the water bowl on her own. The vet's coming on Monday, and I hope she can help us figure out a way to clean her - she doesn't groom herself and she is dirty and smelly, poor mite. But she's so hostile to any kind of messing with her little person - she really is the most difficult cat I've ever dealt with. But I feel sorry, and I think she understands we're trying to help her when we disturb her so often. If she can be sedated so she can be bathed that would be great; it's a terrible situation but today she came out from hiding for a bit and scratched on a cardboard scratching thing. The reason she hides is not because of her illness, but because she does not like being bothered so often by us - this I know. The vet ordered a pain med for her which should arrive soon. We'll see. She still enjoys hearing the chant CDs I play every day.

The reading challenge I'm taking part in requires a book written in ancient Greece or Roman times, or one about those times, or even just a novel taking place during those times. I looked around the library and settled on The Roman Way by Edith Hamilton, published in 1932. So interesting! What Charlotte Mason would call a living book, I think, which means non-fiction written in a narrative style. I have never been attracted to those cultures very much - I prefer the middle ages. Still, a chapter from this morning's reading was about Cicero, and apparently we have eight hundred of his letters.

"Cleopatra. How I detest the woman. You know she lived just across the river from me for several months."  (maybe she snubbed him!) He says that Brutus was charging forty eight percent interest on money he's paid to the people of Salamis! It's becoming more appealing to me - I guess I'm warming up to it. Lots of gossipy stuff.