March winds and other things

Dolly is doing so extremely well - she is more active than she's been in years. I guess it's the insulin, and now her UTI is gone - she's feeling good! Yesterday her blood glucose levels were checked and were surprisingly low, so we'll be giving her the shot only once per day till next Monday, when they will be checked again. Right now she's behind me, on my bed. With the jazz program on the radio, naturally.

March is coming in like a lion, it seems. The wind was fiercely blowing last night and today and below freezing all day.  But it really feels like spring at times. Something about the light and the brightness.

I was typing a comment on Clare's blog when the cursor disappeared. I left the laptop in disgust and came back much later - it was still nowhere to be seen. I had to cut it off; I never got back there. I know I need a new computer - I just have to make a decision. 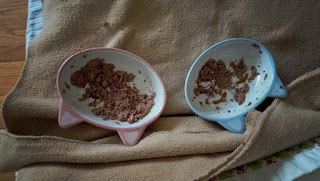 Dolly's dream, to have two food bowls! She ate everything.

I am really liking my Lenten dinner plan, which is something I've done in past years (but not always): the same thing every week. On Mondays, soup and eggs. Thursdays, minestrone and BTLs. Saturday, meatloaf. Sundays, chicken most often, but maybe fish. The other days we have leftovers. Mondays seem the easiest: I make such a large pot of minestrone on Thursdays, that we have it again on Friday and there's still some left for Monday - I don't have to make soup Mondays, so far! It occurred to me that making a recipe every week can help to hone one's technique, which sounds like an excellent thing. Meatloaf, for example - I've made the same recipe for many years, but am trying another for Lent. If I keep making it, I can work out any quirks or things I don't care for; if I make it only occasionally, I don't think I'd be able to do that. So, I may continue this sort of thing after Lent; it's certainly easier than coming up with a new menu every week. We will see.