It's ten o'clock, and fifty four degrees out - if my hair wasn't wet I'd still have my window open. But it's tempting to keep it open tonight, on March 11th for heaven's sake. Today was almost balmy, well into the sixties. Delightful! I felt I should do something outside, so I picked up some sticks, then wandered to the garden and pulled up dried zinnia stalks.

Dolly has another UTI, and more bloody than the last, in case you wanted to know that. My brother happened to have time to come home when a client overslept yesterday and missed his appointment. The vet just happened to be free, so he dropped her off for observation and got her again at his lunch time a few hours later. They were looking to see if anything is wrong, but it's just another UTI, it seems. She got some blood on my quilt so I put it in the wash, and then she came back and got it on my other quilt. I was still finding spots on the floor this morning, but the Clavamox works wonders and she's feeling much better already. Everyone says UTI's are common with diabetes; I hate to think she's going to live the rest of her life on antibiotics every few weeks. 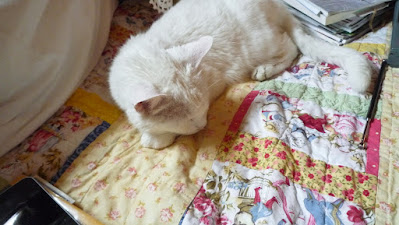 Meanwhile, while typing this, wild sounds of The Orphan speeding around the living room, crashing into things, reach my ears. She's happy.