one-stop shopping in the bargain basement

A few times it's happened that an object suddenly appears, from out of nowhere, but we know the Orphan has brought it. She's scrounged it out of who-knows-where, something we've either never before seen, or had forgotten was in the house.

Once it was a small alphabet block with charming images on it. We can't imagine how it came to be in the house, or where she found it. It's of no use to us; still, I didn't toss it - too cute.  Recently some sort of kitchen scrubber showed up. It's like she gets into the basement closets and goes shopping.

So today it was a maraca. 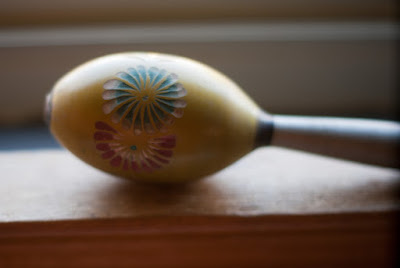 It has taken me all day for the distant memory to return of these maracas I used to enjoy shaking as a kid. Didn't know we still had them. Where the heck has it been?

Of course, the other part of the question is: Did she really carry that upstairs? Really?