he came, we saw, he conquered 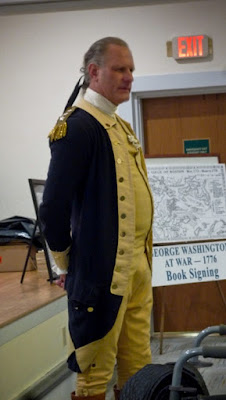 This fellow was Really good. He had an authentic uniform, portraying Washington as a general. He spoke exclusively about the Revolutionary War, the battles, dropping names we learned in our history classes. He was not a spellbinding speaker, but as he told us later when we helped him pack up, neither was his subject, so he figures he's a good fit for playing George Washington.

The prepared portrayal was about an hour with a Q & A for another half hour. And that's when you find out if they know their stuff. He knew. And he stayed in character. One lady just didn't get that and asked him about the Civil War. He looked puzzled, and then thought she must be meaning the English Civil War - he even mentioned something about Roundheads. She didn't get it.

After the Q&A he took questions as himself. 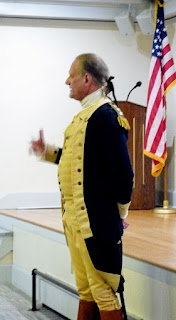 He wanted a photo with the original three of us who couldn't get in to see him last October.

Everyone was very impressed. 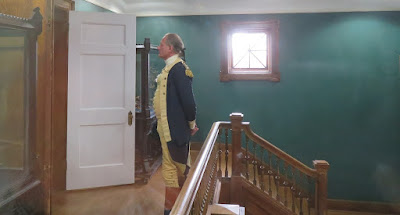 this photo by my brother
Posted by Lisa at 7:21 PM