a good day for Mr. Kibble

I haven't said much about our little friend lately, but there is always so much that could be said. 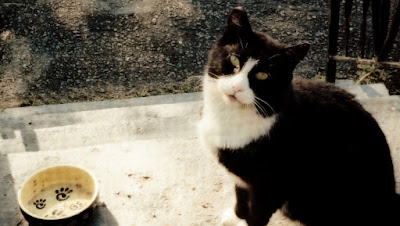 Mr. Kibble had stopped using the shelter about two months ago, and my brother was afraid it was his fault - he had brought the food dish and put it inside while Mr. K. was in there. We weren't sure this was the reason, but it's quite possible that the little fellow had thought his whereabouts were a secret.

Meanwhile, the kitchen garden plants got pulled up a week ago and the shelter moved back near the outlet; it's been getting cooler and now it's near the outlet so the heated beds can be turned on. But he didn't seem to pay it any attention.

Then my brother started putting Mr. Kibble's food bowl right outside the entrance - he would eat, and then come back to us for more, maybe glancing inside briefly. We would later see him sleeping in our flower beds (no flowers, just shrubs) in front of the house, on the mulch. He really seemed to like it in there, sometimes where it gave him a good view of the road, and others right behind and under the rhododendron. And when it rained, as it has so often lately, underneath the picture window which juts out enough to keep him dry. 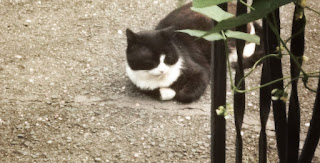 on a dry day

But we hated to see it - a warm, dry shelter waiting for him, while he spent a wet night in a flower bed. It was sad. We wondered if he'd ever forget his negative experience in the shelter and give it another try.

Well, I have to credit my brother's persistence in putting that food dish right near the shelter - this morning we saw him exit the place before he came up to get food! Hallelujah! I think he's in there now. I'm grateful. Yesterday was rain all day, and I saw him in the front bed but around suppertime the rain got heavy and there was thunder. Maybe that was the deciding factor. I asked St. Joseph to please see if he could get him into the place, and lo!

This makes us feel a little better with winter coming on. Meanwhile, Diane came by the other day and it seems she may try and get him inside again this year - we'll see. If he only knew the plotting and planning which whirls around the thought of him!
Posted by Lisa at 8:49 PM