It was in an issue of Food Network magazine, I believe. Somebody mentioned "Heirloom Tomato, Corn and Basil Salad", and I made a note of it. Not the recipe, which I didn't bother to look at, but the idea. 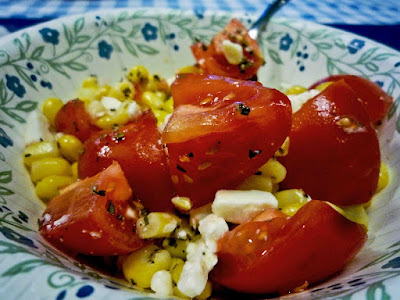 So I made it up yesterday, and again today because it's so easy to just cut up some good-tasting tomatoes in a bowl with lots of basil, and some frozen corn which you rinse under water until it isn't cold anymore. Then, a little touch of vinaigrette and some feta which needed to move along. Speed is of the essence in a summer recipe.
Posted by Lisa at 8:41 PM