Are parsleyed potatoes an English thing?

I've read that potatoes cooked with butter and parsley is an English dish, but - 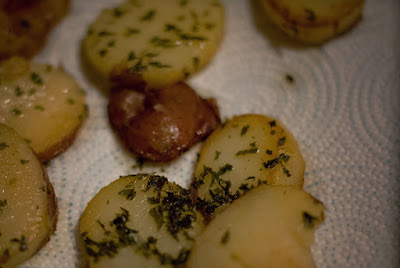 When we were little, my parents were friendly with an older couple. My mother thought this friendship was especially important because there were no grandparents, and so these good people were as close to that as we could get.  They had a very small Italian restaurant in the city, where we'd often go on Sunday evenings; my brother enjoyed being allowed to set the tables (red checked tablecloths!) and refill the shaker jars with red pepper flakes and grated parmesan. The wife did all the cooking herself and the husband waited tables - they were well into middle age back then, and worked hard! Her spaghetti sauce was like nothing I've tasted since.

Anyway, she was an excellent cook, and made a couple of things which still stay in my mind, and one of them - this will probably surprise you - was to slice canned potatoes, and sort of fry them in butter with parsley. We ate plenty of canned veg when I was a kid, and I didn't mind potatoes canned (don't think I'd want them now).

Anyway, tonight I was putting my brother's dinner together - he works late - and there is some leftover chicken and some boiled potatoes. I sliced them up, and browned them in butter with some parsley. They're good; better than just warmed over.