Mastery of the frittata eluded me for years. I guess, looking back, I didn't understand it. My original impression of it was the spaghetti pie - remember that?  Leftover spaghetti, cooked up in a large skillet somehow so it all stays together, and with a bit of a crust. I had no idea how to even begin, and when I tried, it never cooked on top; I didn't have an oven-proof skillet, so I couldn't finish it off properly.

But somewhere along the way I realized that, where an omelet is egg with a filling, a frittata is lots of filling, held together by some egg. And then you cook the top of it in the oven. Ah!  When I realized that I thought I might be able to do it. And I did! 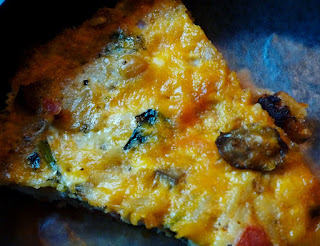 one of the last two pieces

So, this was it. With that old spaghetti pie in mind, I began my plan with some leftover orzo, cooked with mushrooms and chickpeas, nicely flavored. But first, I heated some olive oil in the pan and poked into the fridge for leftover veg. There was the dregs of a bag of salad greens, so I pushed them around in the skillet for a few minutes, and then I found the end of some canned diced tomatoes, so I added that, with some herbs which I forget right now. Then, in went the pasta, and there was lots of it. It was sticking together, so I added artichoke cooking liquid from the previous day, just to loosen it up, and when it looked ready, I whisked up six eggs (maybe salted and peppered?) and put them in. When I thought it must be almost done, I sprinkled the whole with shredded cheddar, stuck the pan under the broiler for four minutes, and it came out so nicely!  I did it! Two slices left, and I put them in the freezer; I'll be glad to see how it freezes.