a thoroughfare for cats

Tootsie has returned for another visit.

It goes like this: my brother feeds them in the morning, shutting Dolly in his room to eat so Tootsie can come up for a while. Before he goes to work, he puts her back downstairs. After I've dressed and eaten breakfast, I put Dolly in somebody's bedroom and let Tootsie upstairs again. I need to get in the basement to do laundry and get food from the pantry, etc. After two or three hours I put her down there again and let Dolly out.  This goes on all day, trying to be fair to both of them.

At least, that's the plan. Today when I put Dolly in the spare room she cried after just a few minutes. I can only ignore this for so long. I actually decided to let her out and see what happened. They went nose to nose and Tootsie got disturbed. I put Dolly in my brother's room. She cried to get out. I waited a while and let her out again. That was okay for two minutes, when I grabbed her before Tootsie could jump on her from behind.  Into the bathroom she went, in the window, where - believe it or not - she was quiet for quite a while. Till I switched them. It's going to be a long FIVE WEEKS.

There is a nice tuxedo kitty who appeared at our front step earlier in the winter. Suddenly there he was, a cat we'd never seen, on our top step, looking at the house. We gave him food, of course. And he comes back every three or four weeks in the same way, suddenly on the top step looking at the front door. 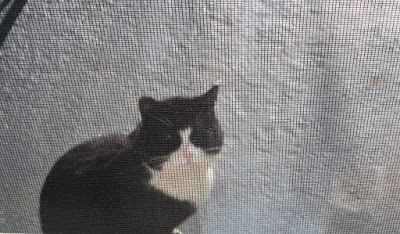 There's something nice and quiet about him.


I had fabric on the kitchen floor the other day and Henry came along to help me by batting around the piece of soap I was using for marking. Thanks, Henry. 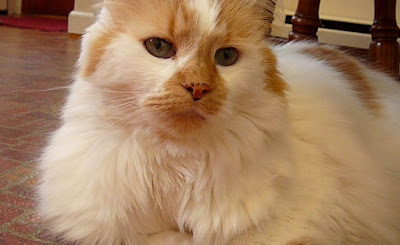 This afternoon I stepped outside to shake a throw rug (we have plenty of those). I quickly realized I was shaking dust onto Sweetie, who was on her "porch" taking the air. 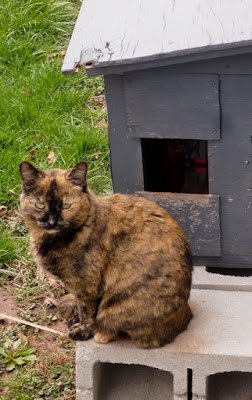 I quietly turned the other way to do my shaking, and she watched me.