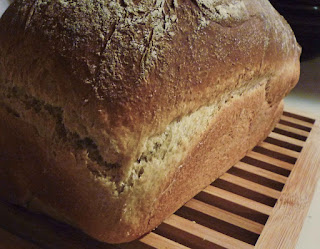 I have spoken here about the bread-making method I usually use, but there's another. My usual  method is to mix up the yeast, water and some of the flour the night before, which is some kind of preferment, and then finish it up the next day. Of course, I'm doing this on my day off. But sometimes on my days off I can't seem to get to it - and I confess that I don't really want to eat store bought bread anymore.

Way back when, I tried the five minute artisan method, but it wasn't for me. I didn't want dough in the fridge all the time; I certainly didn't need to make one loaf per day; I did not really want all my bread to be similar, from the same base recipe. I did want to experiment with different bread recipes.
After poking through the bread books on Amazon, I settled on Kneadlessly Simple by Nancy Baggett. Yes, this was it!

She has many recipes included - it is a cookbook, after all - and all the ones I've tried are very good tasting. (although I will say that her amounts of water seem like too much - I always end up adding much more flour; either that, or I just start out with half of her suggested water amounts.) But it's also a method, and at the end she explains how to adapt your other bread recipes to this method of hers.

Very basically, you are roughly mixing up her ingredients - and she uses a very small amount of yeast - with ice water, and then refrigerating the dough for three to ten hours. It's then put out at room temp for at least twelve hours, and maybe up to twenty four.  You then shape it, and let it rise the second time, which is usually two hours; then bake it.

This is very convenient if you're working. Yesterday afternoon I mixed up my dough, and it was in the fridge from 4:45 until ten-ish. Out on a kitchen shelf all night, and until I came home today after five. I immediately reshaped it into a loaf, and let it rise. It's very helpful to have different ways of baking your bread according to your schedule! Not to mention that the long rise in the cold is what develops the flavor. If you're interested in bread, check out this book.
Posted by Lisa at 8:57 PM