Today was one of those balmy October days I can't resist - so I stayed out as long as I could. I cut back the hydrangea and brought several dried blooms inside with me. Leila's mention of her brown ones made me think of it, but ours weren't entirely dried; I thought some were pretty enough to bring in. 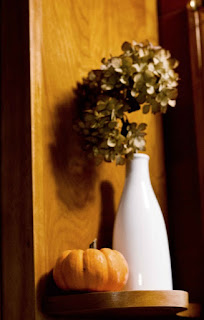 Some are also on top of the corner cabinet in a small crock I found downstairs last week, but it's too dark up there to photograph.

I strained the raw milk yogurt from the other day. This was after four hours; it's still got that lumpy-ish quality, but I'm happy with the experience and it does seem to have a bit of tang after all. 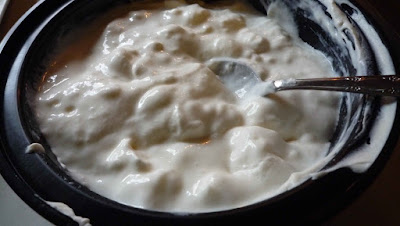 I picked up a P. G. Wodehouse from the library which I knew would be funny. Bertie Wooster is so ridiculous. I remember a radio series on a local NPR station many years ago with Richard Briers as Bertie and Michael Hordern as Jeeves - I loved it. Who doesn't enjoy a good laugh? Anyway, I've been poking through Leila's Library Project suggestions, and recently finished Gentian Hill. It would be hard to describe that book - it was like no other, is all I can say. But now it's time to laugh with Bertie.
. 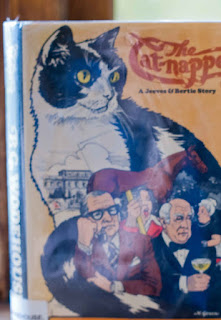 Because I was outside a lot today, I did not finish washing the windows as I'd intended. That's the real, but I don't have a photo of it. Everyone knows what that looks like, anyway.  :D
Posted by Lisa at 8:27 PM