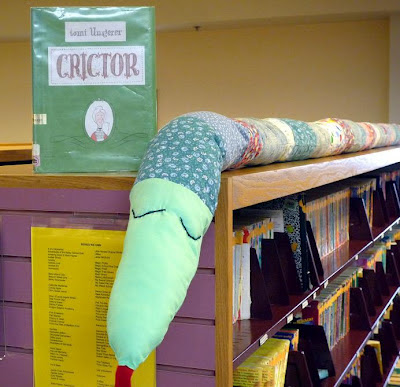 Have you heard of Crictor?   The children's librarian where I work has long (and I mean LONG) been thinking it would make a great book for one of her story hours. But she needed a prop.

It's the story of an older lady whose nephew sends her a boa for a pet. She gets over her shock pretty quick, and brings him everywhere, doting on him (I guess the nephew knew just what she needed!). 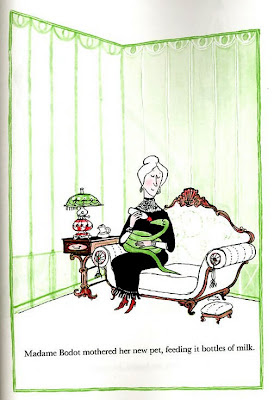 She feeds him from a bottle.  Later, he graduates to drinking from a straw at an outdoor cafe. 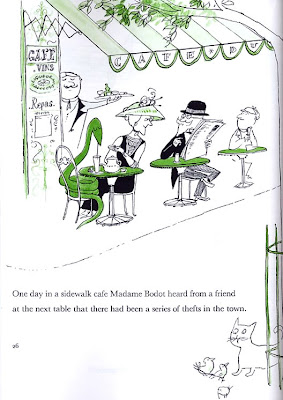 It's very cute, but I don't want to give the whole story away.

But, back to Trisha, who was hoping for a stuffed Crictor.   Years ago, and I mean years, I was knitting something at break time, and she mentioned she wouldn't mind a knitted snake.  Well, I never did anything about that.

And, over the years, once in a great while, she'd mention Crictor wistfully, and my guilty feelings increased.

Finally last year I told myself to get to it, and we went through the donated fabrics at the library.  She wanted him in many different colors and fabrics, and long - seven feet or so; I didn't want him too garish looking, so I stuck with a basic color scheme of reds, blues and greens.

I did pretty well with him, until I got hung up with his head, and then I stopped. And the guilty feelings accumulated.  But during Lent, I told myself that the time had come to finish this project. 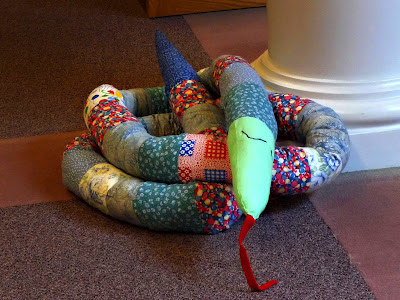 I just completed Crictor on Monday - not really Lent anymore, but.....

He's fifteen feet long!  I have no embroidery experience, so I just did my best with the eyes - they're all right, I guess. Trisha is very happy - she finally has her Crictor.  It took me way too long to do this, but she is like the woman in the Bible, who forgets the pains of childbirth because of the joy at bringing a new life into the world.  So, all is forgotten, my conscience is clear, and she can plan her new story hour.  Whew!

joining with Elizabeth today for needle and thREAD.
Posted by Lisa at 9:58 AM