cake foolishness, or how distracted can one get? 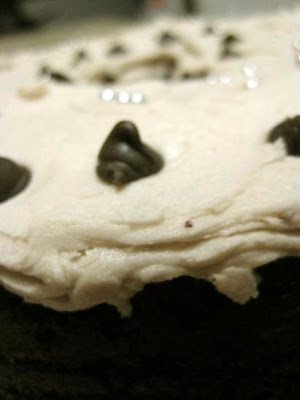 It's not like I've never baked a cake before. I am fifty five years of age.

It was my brother's birthday the other day, and I thought I'd make applesauce cake. Betty Crocker has a great recipe which a  co-worker made for me once. I've made it myself, too; I'm familiar with it. It calls for shortening, but I'm trying to get away from Crisco. I've used butter with this recipe, but I'd been reading about coconut oil and had purchased some; I decided to use it for this cake.  All my research had told me that I could use it in place of butter in baking. So.

The coconut oil was a bit hard in places, but having no experience with it, I just mixed up the cake and poured it into my 13 x 9 pan.  I noticed some small lumps. It was some of the coconut oil which hadn't smoothed out in the beating.  This didn't seem good, but it was already in the pan, so I put it in the oven, hoping it would all melt away in the heat.

When I took it out, I could tell it wasn't as it should have been. There were air holes all along the top, and it seemed more dense, heavier.  I cut a piece as soon as I could; it wasn't bad, but wasn't anything I'd put frosting on top of - more like a snacking cake.  I left it to cool, planning to freeze it.  Meanwhile, I had to make another cake.

I determined to pick the first one I had all the ingredients to.  The first thing I saw was a "One Bowl Chocolate Cake" recipe which my mother'd copied from somewhere.  It called for butter, and that's what I used! (do ya wonder?), and because it's fall  thought I'd put in a bit of cinnamon and allspice. Then I grabbed the vanilla. I didn't get much out of it - it was the end of the bottle. I turned it around before throwing it out and saw on the label that I'd used the anise extract by mistake. Oh, boy.  Anise, with chocolate, cinnamon and allspice!  Lovely! Ah, yes. I would also like to say here that, while I like Stella D'Oro's anisette cookies as well as anyone, anything stronger  - like licorice - definitely turns my stomach.  And the half teaspoon I'd used was filling the kitchen with the aroma.  Yup. 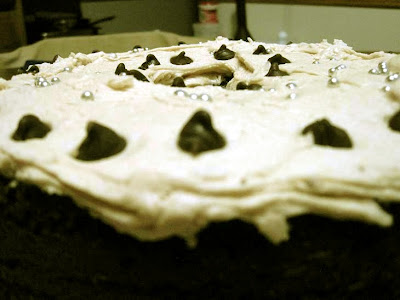 Anyway, I got out my tube pan, greased and floured it, poured the batter in and put it in the oven, smelling that anise all the while.  The cake was in the oven - maybe a minute and a half at most? - and I turned to clean the counter, when what should confront me but three eggs!   Ah, me - I'd forgotten to add the eggs!  I got that cake out of the oven - the pan was already hot, but the batter was okay - and scooped it back into the mixer bowl.  It certainly looked better after the eggs were in. But I had to wash the pan, and grease and flour it again!   Ahhh, yes.

Put it back in the oven, and set the timer for 35 minutes.  What I busied myself with in that time, I am unable to say - it's all a blur, and who would trust what I would tell them anyway at this point?

Yes. So, the buzzer went off and I peeked through the glass - it didn't look nearly done!  Well, dear folks, I had forgotten to turn on the oven. Or, rather, I guess I'd turned it off - for some reason.   Ahhhhh   So, I just turned it on and baked that cake.

Later, my brother said, "What's this flavor I detect?"  I said I put in anise by mistake. He said he liked it. 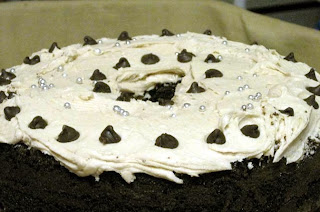 I didn't tell him the whole story.  What for? He would probably just get that glazed-over look anyway.

The applesauce "snack cake" is in the freezer.  And I made him a cheesecake today. With cranberry topping.
Please believe me, it came out fine.
Posted by Lisa at 10:19 PM